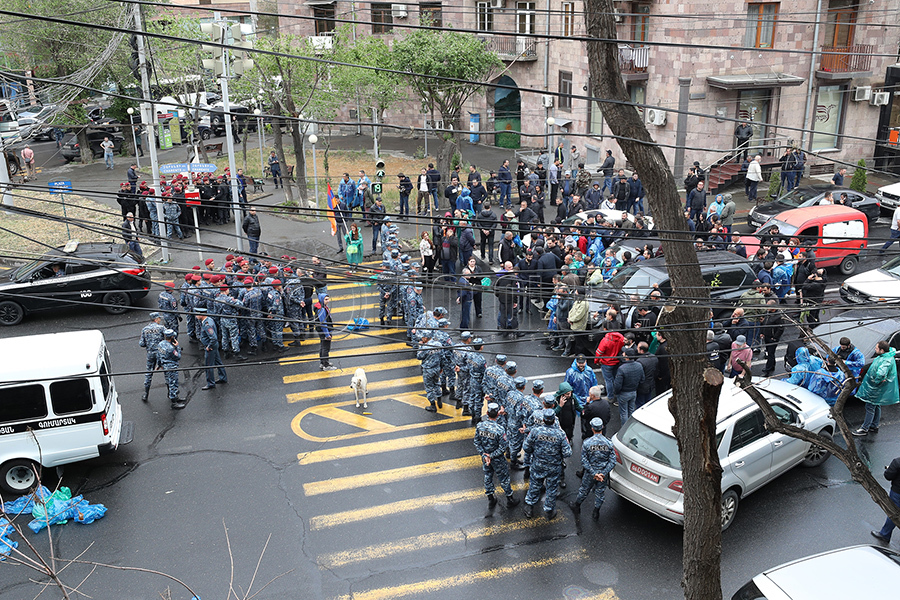 Journalists have been targeted during peaceful protests in Yerevan since the early morning of May 2.

At the intersection of Baghramyan Avenue and Proshyan Street, the head of the State Security Service Sargis Hovhannisyan struck Mediahub operator Arman Gharajyan and swore at him.

Journalist of the same media Nare Gnuni approached him before the incident and asked, “Mr. Hovhannisyan, are you satisfied with this situation?”

At first, the head of the police department pushed the microphone with his hand, saying that he was talking on the phone.

Later, a young man accompanying him pushed the cameraman, then pulled at and kicked him. The journalists’ camera was also damaged.

Yerkir.am journalist Lia Sargsyan fainted during a scuffle between protesters and the police. The incident took place at the Sayat-Nova-Abovyan crossroads. She was assisted by her colleagues, protesters, and police officers.

After a while, the journalist came to her senses, her condition was normalized.

The President of the Union of Informed Citizens, Daniel Ioannisyan, summed up the cases of violence and considered the incident of violence against journalists by the head and employees of the State Security Service problematic. According to him, after the incident, the journalist contacted them and presented the situation.

In this case, they submitted a report on the crime.

“It is obvious from the footage that it is clear to the servicemen that he is a journalist who is carrying out his professional activity. The root reason for what happened is that the employees of that service feel unpunishable. In 2021, journalists had been dragged out of the National Assembly and they were not held accountable for it,” said Ioannisyan.

Journalistic organizations have issued a statement stating that in the conditions of any aggravation of the social-political situation in the republic, the attacks and pressures on journalists and cameramen also increase.

They demanded that the government initiates an official investigation and bring Sargis Hovhannisyan, the head of the State Security Service, and his subordinates who exceeded their authority to justice. As well as giving appropriate instructions to both the press and the police representatives, so that their actions are not in violation of the rights of media representatives and that they are shown respect.