Women In The Media: 2021 Elections (Research) 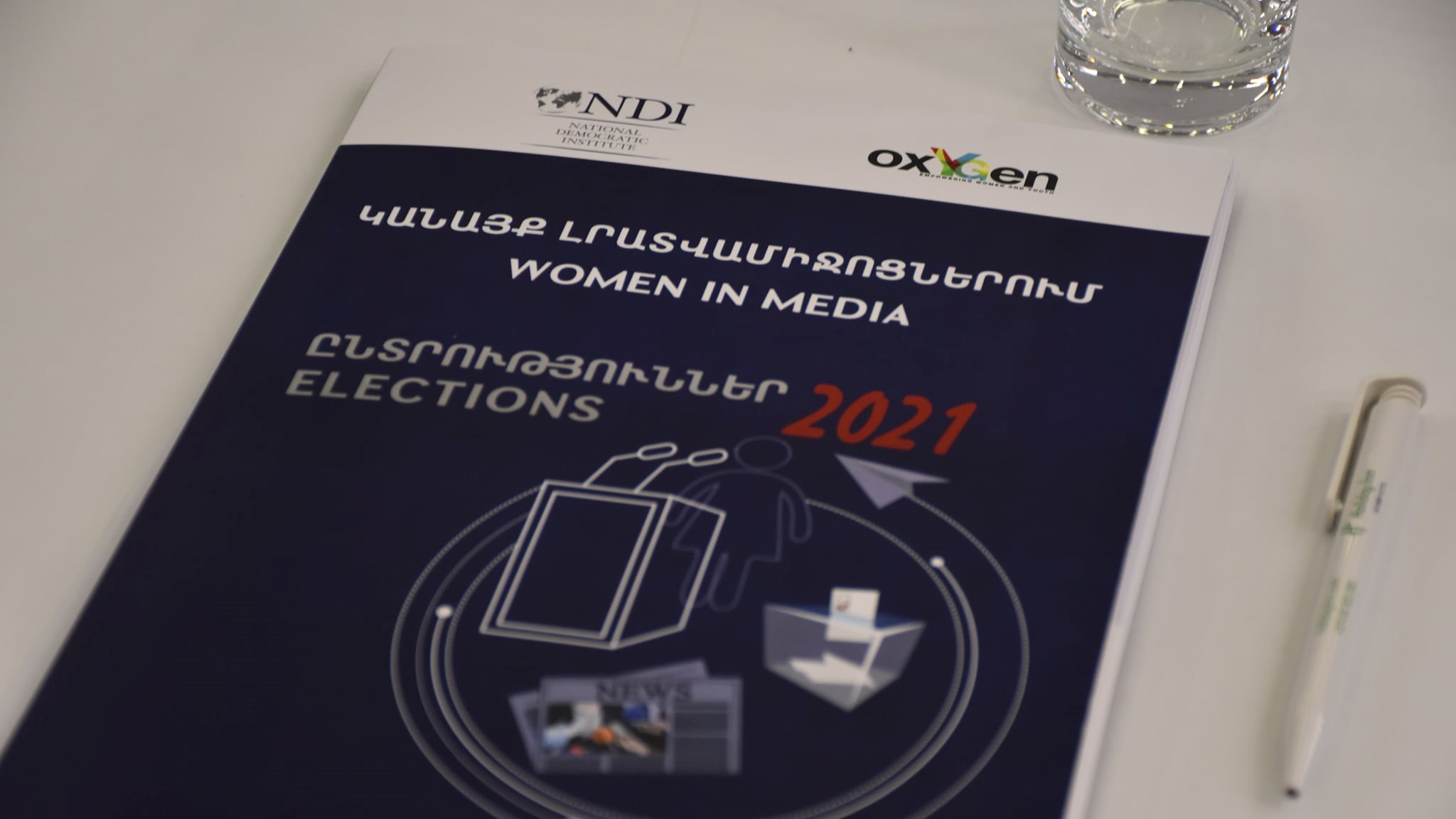 The representation of women in the RA National Assembly has increased from 5% to 34% since 2003, which ensured the gender quota stipulated in the RA Electoral Code.

The requirement of at least 30% representation of females under-represented in party electoral lists was enshrined in the RA Electoral Code in 2016 but first came into force in the 2021 snap elections, when 34.6% of women won parliamentary seats. Significant expansion of women’s representation also took place in the 2021 local elections.

But did the introduction of the quota also lead to an increase in the number of women candidates in the media during the elections, or does it imply a broader coverage of women and gender issues during the elections? The answers to these questions were provided by the Oxygen Foundation “Women in the Media: 2021 Elections” program. The program was supported by the Institute of National Democracy.

21 parties and 4 blocs with 2,498 candidates participated in the June 20, 2021, snap elections to the RA National Assembly, 925 of which were women (37%). Only two of the political force voter lists were headed by women.

In order to observe the trends of the pre-election coverage of the NA elections, the research team selected the following media outlets:

The main programs of the news releases broadcasted on the selected TV channels between 7:00 pm – 12:00 am, all the news-analytical and social-political and debate programs were observed. The coverage of the elections among them was more than 65 hours.

The total amount of airtime allocated to female candidates for the National Assembly as speakers was 9%. This means that female candidates had the opportunity to express their position on the observed TV channels for about 5 hours (17,823 seconds), and the male candidates – more than 55 hours (180,775 seconds).

As speakers, female candidates were most often seen on Shant (12.1%) and Public Television First Channel (11%). Most often they participated in TV debates and interviews.

The analysis of the collected data showed that out of 25 political forces participating in the elections, the positions and views of the women involved in the 17 forces were more or less presented on TV.

By the way, the female candidates who most often appeared as speakers on television represented the “5,165 National Conservative Movement,” “United Homeland” and “Armenian Homeland” parties. 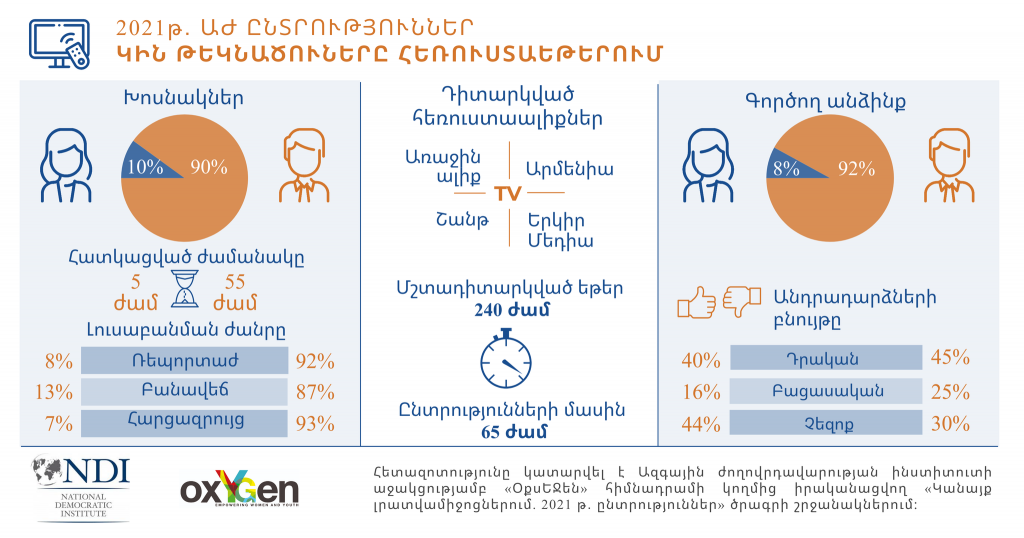 The nature of the TV references to the female candidates for the NA deputy during the campaign was mostly neutral (44%) and positive (40%). And there were negative references only on Public TV (16%), which is probably due to the fact that there was a lot more material about women candidates than on the other three TV channels. If we compare these indicators with male candidates, the picture here is different․ The positive tone (45.4%) was followed by the neutral (29.7%) and negative (24.9%) tones.

Some TV references in a negative tone contained manifestations of sexism. They were viewed in the context of debate programs aired on Public TV through gender stereotypes such as:

During the parliamentary election campaign, candidates rarely spoke on television about gender equality and/or women – only 0.1%.

The female candidates for the NA deputy were covered as a speaker in only 7.7% of the observed materials.

During the campaign, videos capturing the speeches of female candidates were the most published on the news site Aravot.am (7.3%), followed by 1in.am (2.5%). 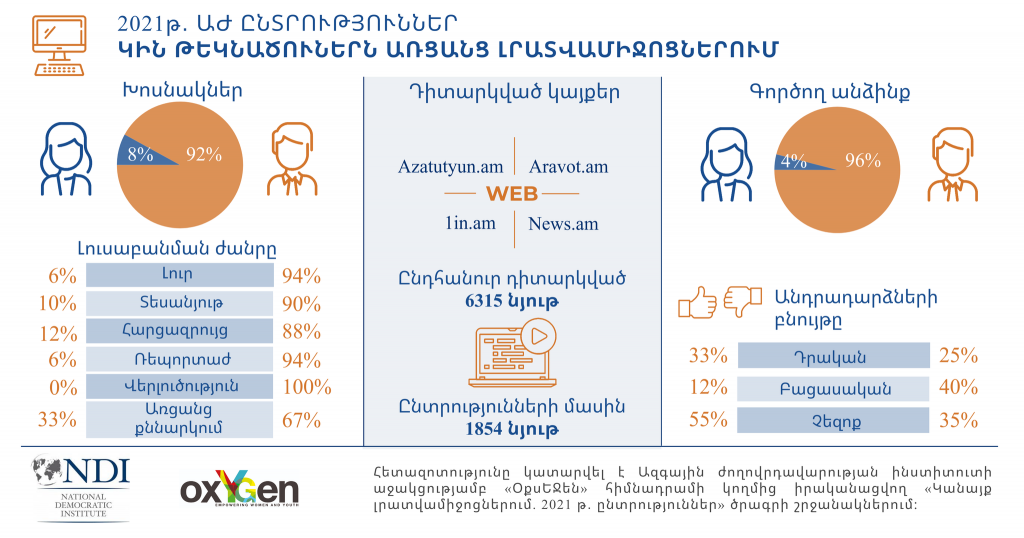 If the relatively new forces were given priority on TV, then the websites, as speakers, most often, the already well-known forces were presented – the “Civil Contract,” “Bright Armenia,” “Armenian National Congress” (ANC) parties and female representatives of the “Armenia” and “I Have Honor” blocs.

Women were relatively often covered in online discussion and interview formatting. In the format of news and reports, women candidates were covered by only 6%, i.e. the news flow was mostly male.

More than half of the references to female candidates for the NA deputy on news websites were neutral (54.5%), and one-third had a positive tone (33%). Negative materials were the least and amounted to 12.5%. The negative tone, however, was not due to gender.

Among the program topics in the online media, there was almost no coverage of gender equality or women-related topics. Only 3 articles of those observed covered the topics of creating jobs for women and making them more competitive and involving women equally in the army, accounting for only 0.2% of publications on all program and non-program topics.

To identify trends in the coverage of women candidates during the local government bodies (LGB) election campaign, researchers monitored: 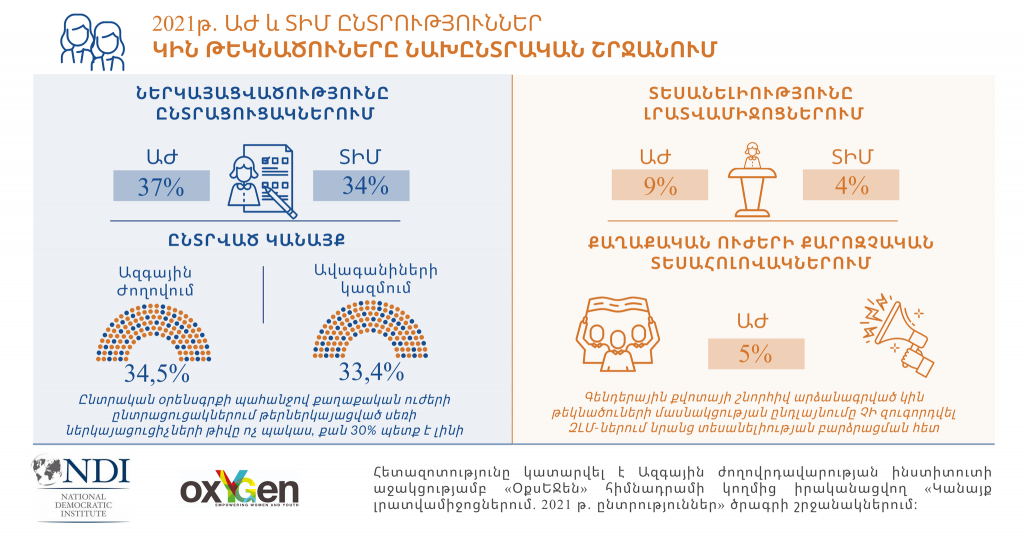 The visibility of female candidates in the local elections as speakers in the media was only 6.3%, compared to about 34% of their representation in the voter lists of political forces.

Coverage of women candidates in the local elections was almost non-existent. The share of them in the online media was only 1.4%, and on TV – 0%.