Growing Audience, Declining Trust: The Image Of Media Consumption In 2021 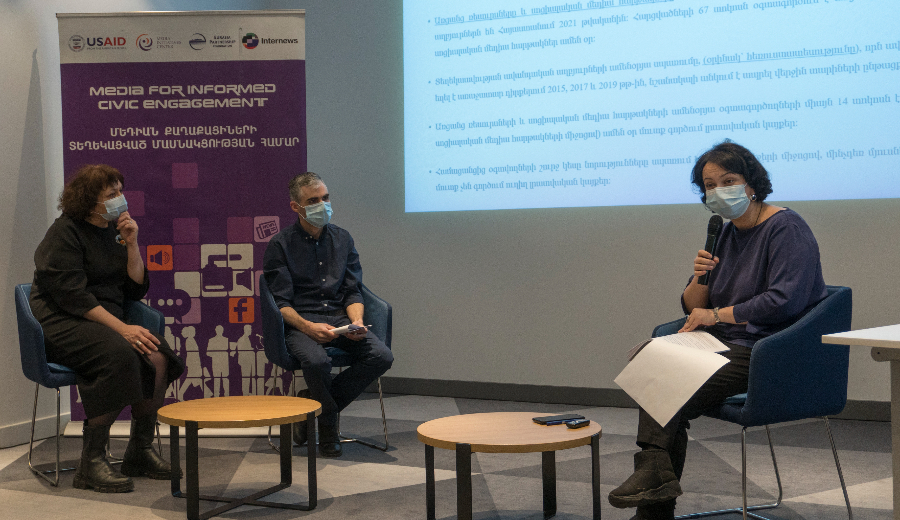 In the last two years, the types of media with which Armenians receive information every day have changed. If until 2019, television was the primary source of daily information, by 2021, most people will use Internet resources and social networks.

These latest data on the specifics of media consumption in Armenia are included in a 2021 study conducted by the Media Initiatives Center (MIC) and the Caucasus Research Resources Center (CRRC). It is based on a survey of 1,213 households. Being the last of 4 similar surveys, it not only provides the latest indicators on information consumption tools and methods but also records the changes observed after 2015.

Indicators from different years show that Internet resources and social networks have gradually become the dominant source of information, but with greater momentum than television.

The most popular platforms are Facebook and YouTube, where 90% of those who have accounts on social networks are present. As for the time spent on social media, in addition to the above, Instagram is also the leader, with more than half of its Armenian users being active almost always or several times a day. The opposite is true of Odnoklassniki, which was once popular in Armenia․ The platform, which was used by 66% of respondents in 2015, is now used by only 17% of respondents, more than half of whom do not use it more often than once a week.

Most of the respondents answered that they use social networks to get news. It is worth noting that more than half (54%) of Internet users consume news only through social networks and never directly access news sites. Although this figure has improved since 2017 (63%), it still speaks of the great dependence of traditional media on social networks.

On the other hand, the results of the research show that the majority of social network users are passive consumers of news, they do not spread political or social information.

When encountering suspicious information, the majority of respondents do nothing (80%) and only 8% try to check it. If in 2019 the main way to check the information was to search the Internet, now more often visit trusted websites.

Finally, the research also addressed the issue of trust in the media. International TV channels are in a favorable position in this regard, 77% of the audience of which trusts the reliability of the information presented by them, 53% – editorial independence, and 68% are satisfied with the professional qualities of journalists.

National and local broadcasting radio also has a high rating with these indicators, online resources and social media have a low rating. Note that the radio audience has been small but steady over the years, perhaps also because of this confidence.

There is a noticeable change among people who are willing to pay for consuming reliable content. If in 2019 6% of respondents would pay for such information, in 2021 that figure is 13%. In both cases, the respondents are ready to pay no more than 4,000 AMD per month.

Some of the results of the research can help media representatives in their work to actively engage audiences on social networks and beyond.

Other indicators need further study, such as whether making content a  paid service will change its quality and help combat misinformation, or whether it will be another barrier to the widespread availability of reliable information.

These surveys conducted since 2015, which are summarized by the latest research, have accumulated rich data on the media consumption preferences of Armenians, at the same time showing interesting trends.

On the other hand, developments in media and technology, the convergence of different media or legal arrangements have necessitated methodological revisions.

During the panel discussion following the presentation of the survey results in Yerevan on January 25, MIC Director Nouneh Sarkissian noted such a change. Prior to licensing, local TV channels had a wider definition than just regional TV channels. So, the issue of their consumption did not have the same significance in the 2015 and 2021 research.

Another issue that was discussed was the study of social networks and Internet sources as a single source of information. Laura Baghdasaryan, Director of the Region Research Center, is convinced that online resources must be dismantled in order to be able to combine their audiences with traditional media.

Sona Balasanyan, the director of the discussion and CRRC director, is convinced that their separation will not change the picture of consumption in the case of traditional media, and one can get an idea of the differences from other indicators, for example, from direct online media visits.

Responding to the changes, according to the researcher, the appearance of the questionnaires is not only necessary but important, which as a result of a long process of development has become suitable for conducting national surveys.

According to Nouneh Sarkissian, this series of research has raised many such questions, which will be useful if MIC and CRRC undertake new research.

The full text of the survey will be published in the coming days on the CRRC Armenia website and the MIC website.