“In The Search Of The Absent”: Encircle The Disaster And Remember 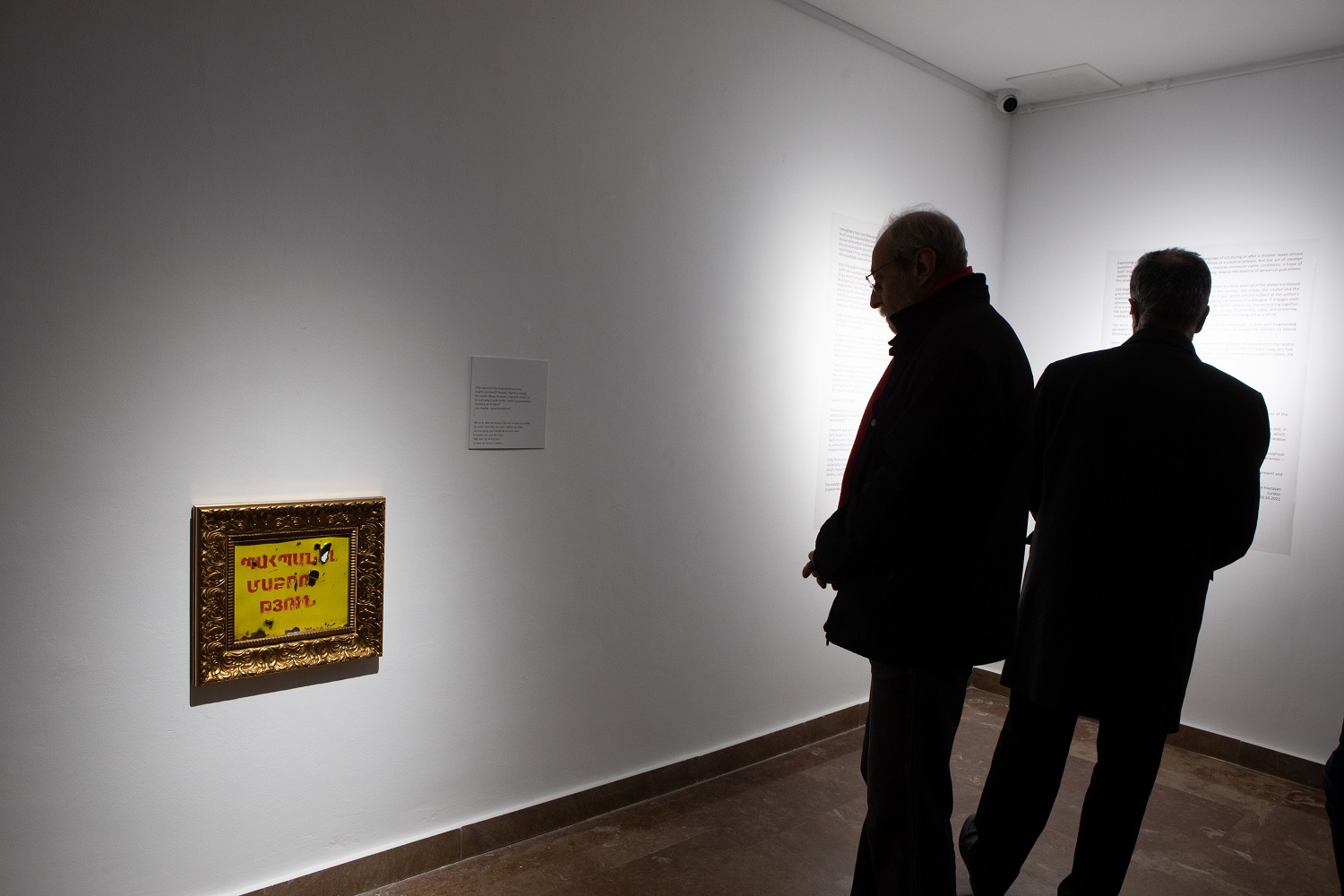 The “In Search of the Absent” exhibition, which operated in Yerevan for a week, had a very interesting ending. It disintegrated in life, as the exhibits were quickly and directly transferred from the gallery to the viewers’ house, becoming the property of individuals and the materialization of memory.

People bought and took home not abstract works of art, but just a memory. And a very painful memory related to war, loss and death.

It’s really courageous in today’s very confused and uncertain life. You give money and get a piece of a painful reality, framed as if it were a piece of artistic work.

It’s as if you’re taking the war home and hanging it on your wall.

So that it is in front of your eyes. So that you do not forget that the pain works with your subconscious and you also talk to yourself about what you did and what you did not do. 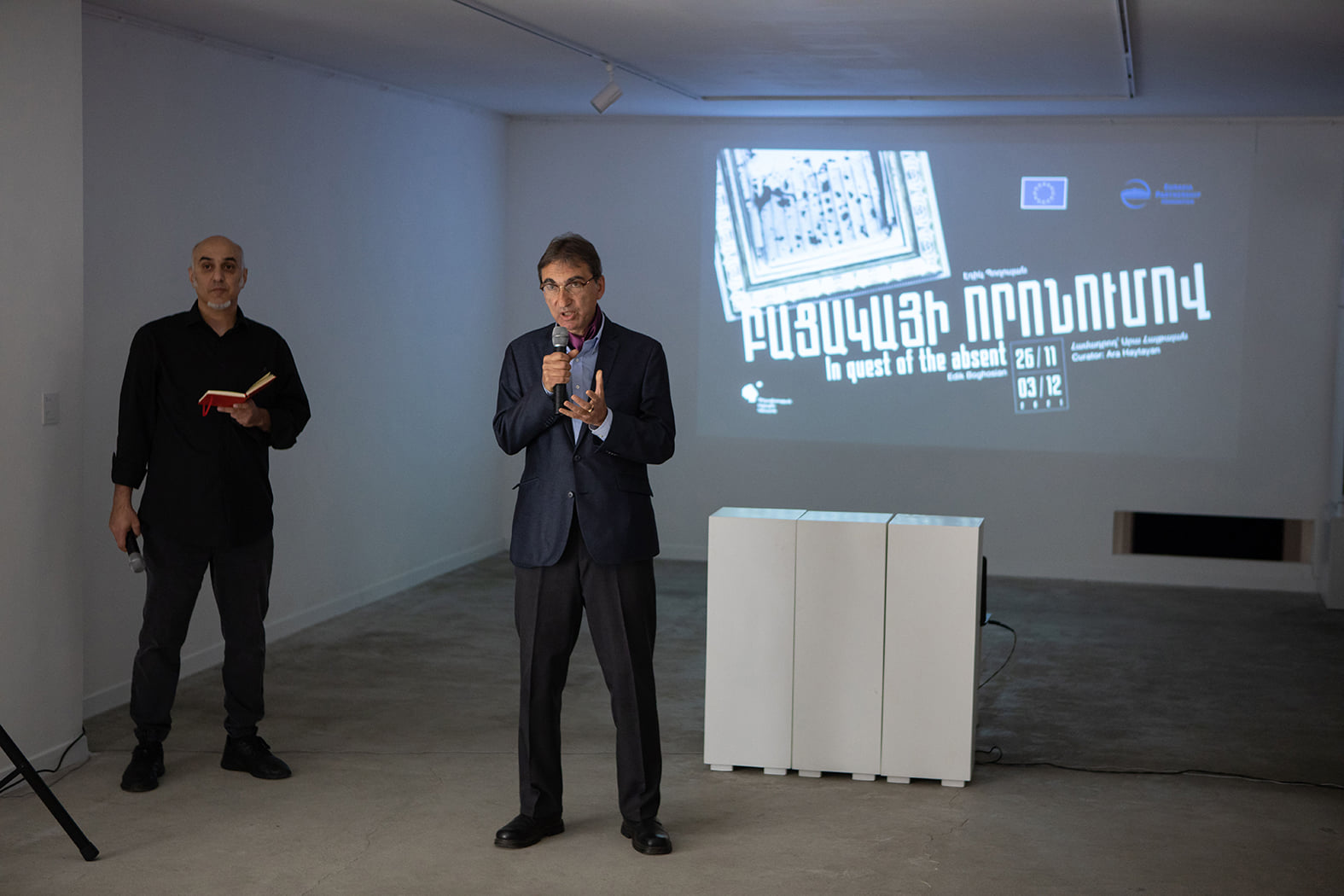 Artist, designer Edik Poghosyan framed the real traces of the last Artsakh war (metal fragments damaged and destroyed by bombings and shootings – the body of a car, a sign, a roof plate) with glittering frames. With large, wide, glossy frames, golden, silver, in a word, glittering, glamorous.

The piled, damaged and deformed metal is in a contrasting collision with shine and luxury. This is a very simple contrast, but influential.

Comfort and war are in one package. And now many people suddenly consider it important to have that package in front of their eyes. The beautifully framed catastrophe is perhaps more terrible than the dry documentary.

Moreover, there is no person physically in the exhibits. It is just a text and audio collage of people’s thoughts, without contextual and documentary clarifications of who said it, when and after what.

It is a direct speech of the eyewitnesses, without information about the speaker. Or they are short posts: father is no more, the shelling continues, the village mayor is alive, there is a whistle, a bang and dust, the barrel is in the yard, the projectile is falling on the tail of the car… 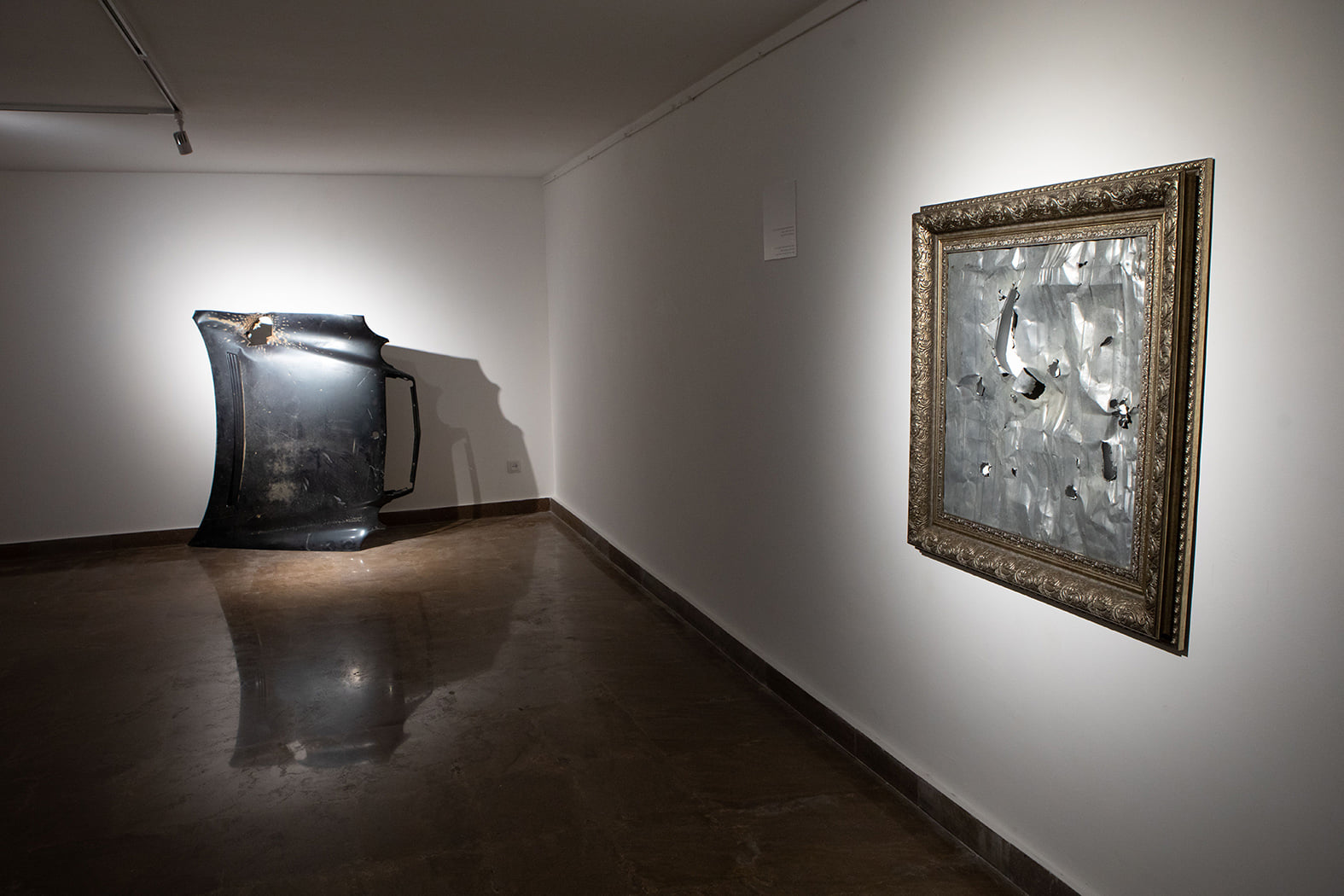 The person is absent.

But in reality, no one wants to be absent even if the absence, isolation, shelter from shelling or information is sometimes a form of self-defensive instinct. It is more difficult to be present, and we all involuntarily look for ways to be present.

Perhaps now the only available means is to hang the memory on the wall as a symbolic gesture that we are present remembering.

This is how the curator of the exhibition, artist Ara Haytayan, explains the idea.

“Let me try to say briefly that art brings one person closer to a monolog, which is probably absent today. In general, our feelings, both in life and in art, begin with the ability of one person to speak. After all, the main topic connecting people today is blood, loss, absence, the victim, the blow. It connects us all, and we see it in one person’s monolog. In the self-flagellation of one man, who each of us somehow relived during this war and after the defeat. But probably many did not give into them and did not serve them, and Edik Poghosyan tried to do that.”

This project belonging to Edik Poghosyan is a continuation of the “Consequence – Artifact” project created in 2018 when he turned metal waste brought from Artsakh into works of art, artifacts. This time he did not interfere with the material, he just framed it. 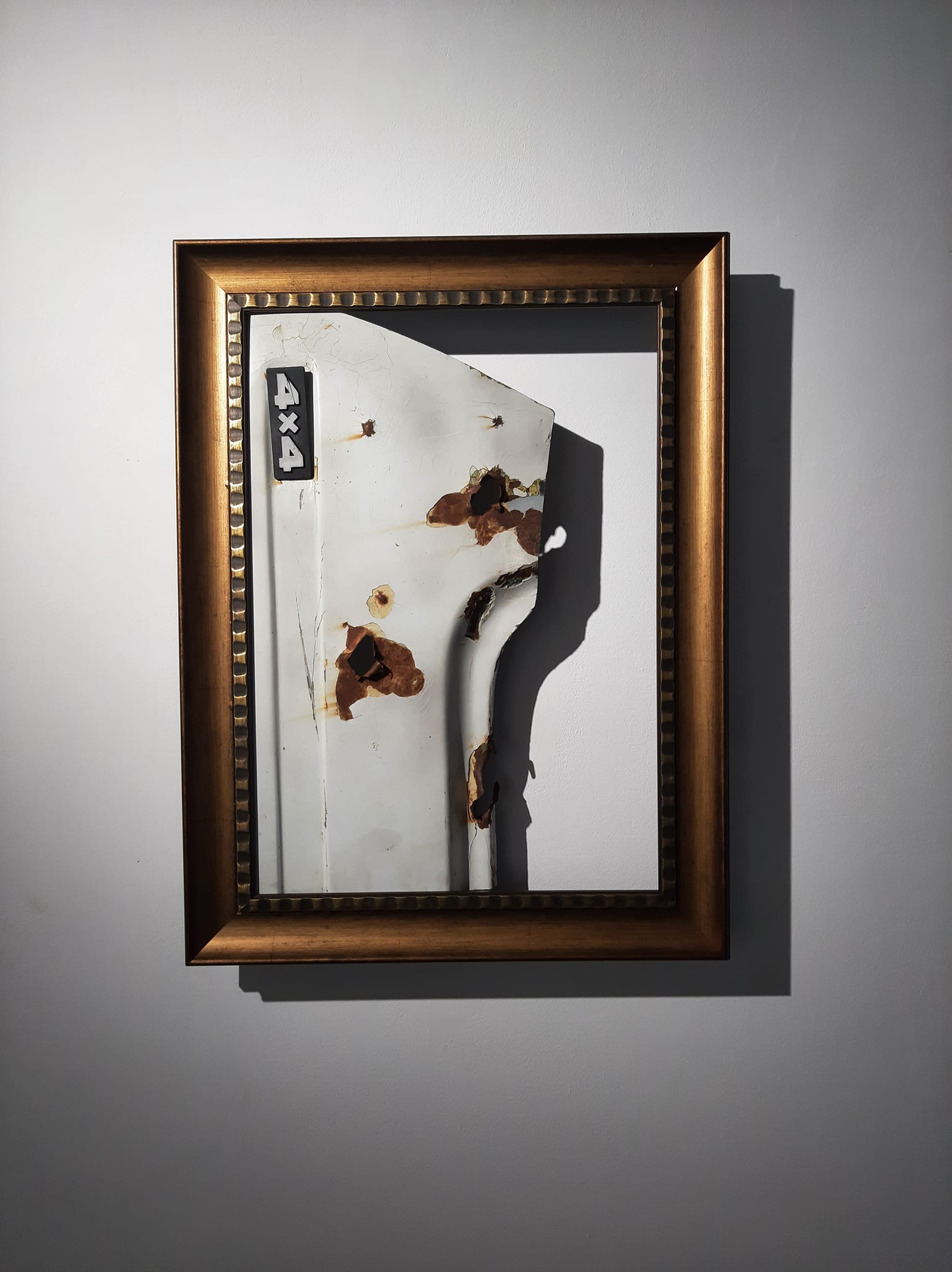 And it is interesting that after the first Artsakh war when victory seemed like a stable reality, it was easier to find the traces of the war, although thirty years had passed. The psychology of the winner did not allow them to rush to eliminate the traces, to leave the information about the damage left in the fields, streets, mountains. That it wears itself out, disappears, is erased.

Edik Poghosyan says that now, although only a year has passed since the new war, and the devastation was more tangible, you can hardly find traces of the war. People quickly collect, clean and erase them. Probably, the land will look healed, at least visually, and the people of Artsakh will forget the disaster by the expectations and searches of everyday life.

And here the role of art is to remind.

Those who came to the exhibition and wanted to take the exhibits home (all the money will be directed to charity), roughly speaking, would buy pieces of framed iron with their hard-earned money and think that instead of being absent, they could be present.