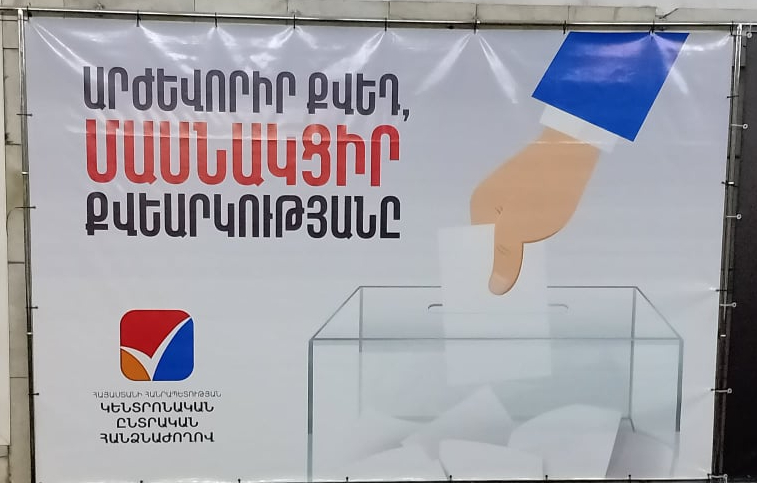 As in the previous report, during the actual campaign (June 7-18) all 6 Armenian national TV channels (First Channel of the Armenian Public Television, A-TV, Armenia, Yerkir Media, Kentron, Shant) and the work of Public Radio of Armenia were examined.

The First Channel of Public Television and “Yerkir Media” TV showed the greatest attention to the elections among the national broadcasters. The total amount of airtime provided by these two media outlets during the election campaign was almost twice as high as the corresponding total of the other five media outlets surveyed. “Kentron” and “Shant” TV companies are in the second group in terms of the level of election coverage.

The authors have noticed a certain change in the coverage of the elections by “Kentron” TV. If before it competed with “Yerkir Media” with the intensity of coverage, this time it does not pay much attention to the campaign.

Previously, the “Prosperous Armenia” party was in the center of “Kentron’s” attention, but this time during the first six days of the pre-election campaign, the “Civil Contract” party is the obvious leader in terms of both volume and frequency of references. By the way, the references to the “Prosperous Armenia” party on the air of “Kentron” were exclusively neutral.

“Armenia,” A-TV and Public Radio have significantly lagged behind in terms of attention to this pre-election campaign and have been limited to media coverage of the elections.

As in the previous stage, on June 7-12, the media devoted the main airtime to the “Civil Contract” party and the “Armenia” Alliance.

Although the other 23 political forces, unlike the data of the previous report, were not left out of attention.

This time, too, “Civil Contract” is a leader in terms of both volume and frequency of coverage. In almost half of the cases (117 out of 251), the references to the ruling political force were accompanied by negative assessments and only in three articles it was covered in a positive context.

This time there were 15 negative and 26 positive references to the “Armenia” Alliance , 13 of which were recorded on the “Yerkir Media” TV channel.

This circumstance allowed the authors of the research to conclude that the already widespread description of the elections as a “struggle of the past and the present” is well-founded.

It is also mentioned that the theme of the whole election campaign is focused on the assessments of the modern history of Armenia (last 30 years).

At the center of the debate between the political forces participating in the elections are the security issues of Nagorno Karabakh and the country, which leads to a sharp and emotional confrontation.