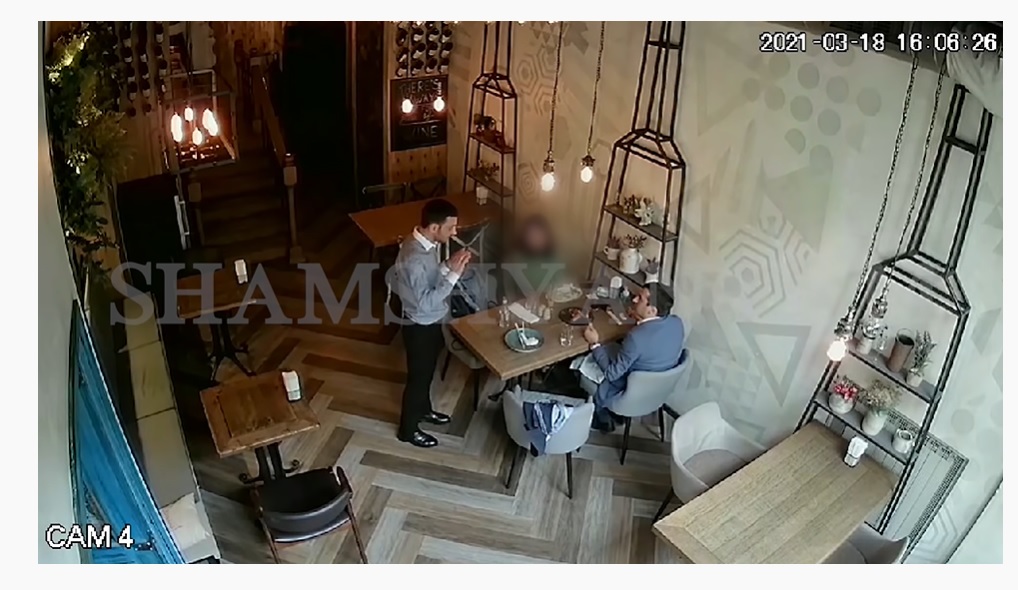 On March 18, Paylak Fahradyan, editor of the irakanum.am website, announced in a video message that he had been attacked in a cafe in Yerevan by the RA Minister of High-Tech Industry Hakob Arshakyan.

Later, two-part footage of the cafe’s cameras appeared on the Internet, showing the episodes of the incident with the participation of the minister and the journalist: how the journalist first approached the minister while he was having dinner with a woman and began to videotape their conversation, then how the minister proceeded to hit the journalist and break the computer.

Paylak Fahradyan told media.am that he was very surprised by the minister’s behavior, as he always had a very positive opinion of him and did not expect such an attitude towards the journalist.

“There has never been an incident with Arshakyan before, I came across him by chance in a cafe, I approached him, introduced myself as a journalist, asked him why he was in the cafe during working hours, he told me to turn off the phone, I turned it off, after which he threatened me, I was on the second floor and I was working on a computer when Arshakyan got up and attacked me.”

At around midnight on the same day, Hakob Arshakyan posted on his Facebook page, noting that he was against any violence and was guided by the principle of resolving issues by civilized methods, and mentioned that he was ready to take responsibility for his actions.

Information had appeared on the Internet stating that the journalist had provoked the minister and uttered insults, although the minister did not mention that in his post.

“I did not swear at him, I did not say any insulting words, my partner Tatev Ayvazyan was with me, and I would not allow such behavior in the presence of women, and if I had insulted him, he should have reacted at that moment, not lose his cool after some time. Even the minister did not mention in his post that I cursed him, I do not know where that information came from,” the journalist said.

While Hakob Arshakyan was publishing his post, the Human Rights Defender Arman Tatoyan condemned the incident in his statement, emphasizing that there is no reason to justify the violence against a journalist working professionally, especially by an official.

The director of the Yerevan Press Club, Boris Navasardyan, thinks that regardless of whether the journalist’s work had been obstructed or not, a high-ranking official cannot behave in such a way in a public place. He said that it was obvious that the minister knew who he was dealing with and that the incident would be widespread.

“Unfortunately, almost every day we see such incidents between officials and journalists, and no state instance responds to those cases. Society is already very tense in this period, and such incidents aggravate the situation, of course, apart from the legal assessment, this incident is morally and ethically unacceptable, and it must have consequences.”

Human rights expert, lawyer Ara Ghazaryan told media.am that the incident with the participation of the minister and the journalist was a very unpleasant phenomenon and it is obvious that Hakob Arshakyan committed a criminal act.

“A criminal case cannot be avoided in connection with this case,” the lawyer is convinced, “because there is a video from which it becomes clear that the minister used violence in a public place in the presence of other people and damaged the journalist’s property. The investigation will find out under which article a criminal case will be initiated if it is proved that the official obstructed the journalist’s work, it is the first part of Article 164, and if not, then the second part of Article 258 with the crime of hooliganism.”

Ara Ghazaryan finds it surprising that many criminal cases of violence against journalists were suspended during the current administration, although it should have been the other way around, and he hopes that at least this incident will not remain unaddressed and will instead have a restraining effect on officials.

“The case is now in the legal sphere, and I will do everything together with my lawyers to bring Arshakyan to justice,” Fahradyan concluded.

About a dozen journalistic organizations also issued a joint statement condemning the incident. The statement says that during their observations it is an unprecedented phenomenon when a member of the government uses his fists when dealing with a journalist.

Journalist organizations demand that the government and the “Civil Contract” party publicly condemn the minister’s behavior, discuss the expediency of his further tenure and give guarantees that such cases will be ruled out in the future.

“High-ranking officials and politicians must be ready to be in the center of public and media attention and to treat their issues with restraint. We especially note that journalists, in their turn, are obliged to act within the framework of law and professional ethics. We have grounds to perceive this incident as a consequence of the improper reaction of the government circles in connection with the previous similar cases. Even now, the attempts of some of Hakob Arshakyan’s political teammates to directly or indirectly justify the violence with public statements and comments are causing confusion,” the statement reads.

Journalistic organizations also appealed to journalists. “We call on journalists to avoid provocative behavior when dealing with officials and politicians, especially in cases when it does not in any way contribute to the implementation of the professional mission of providing objective information to the public.”

This was not the first case when Paylak Fahradyan found himself in a conflict with an official. In 2016, an incident with his participation took place in the National Assembly with MP Mher Sedrakyan. The deputy had sworn at the journalist. The NA Ethics Committee examined the case and decided that the deputy did not swear at Paylak Fahradyan.