A Film About Artsakh That Caused A Stir At The Berlinale 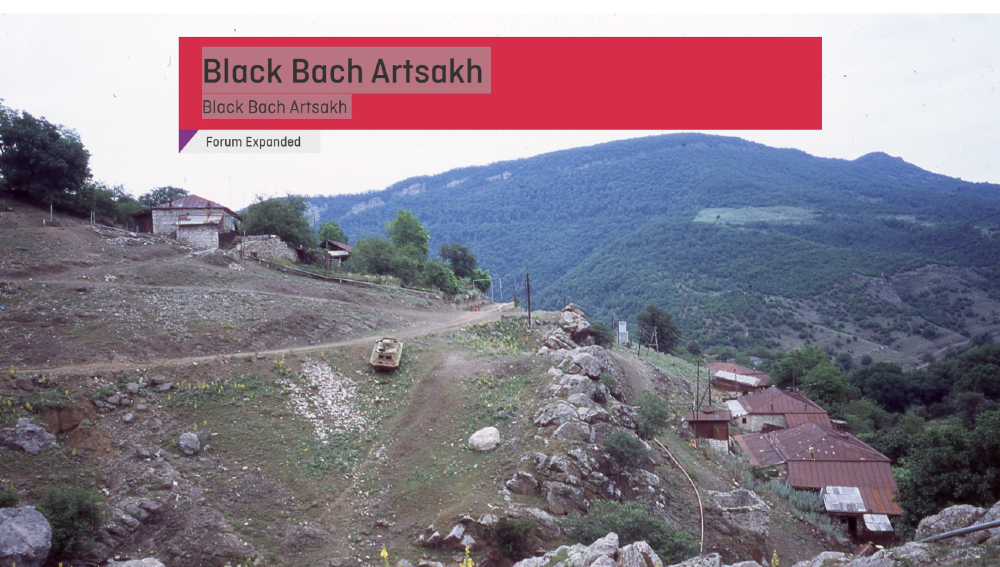 The Berlin International Film Festival, which is currently taking place online, has to give explanations and defend a film about Artsakh which has been included in the Forum Expanded program.

At the core of the documentary “Black Bach Artsakh” is the decades-long conflict between Armenia and Azerbaijan. Filming started back in 2007 when the authors conducted a series of interviews with the residents of Artsakh and then re-edited them in 2020.

The authors are visual artists Rene Gabri and Ayreen Anastas, a couple of New York artists who create contemporary art projects. Rene Gabri is an Armenian from Iran, and Ayreen is a Palestinian. They have been well-known in the field of contemporary art for a long time, for their visual experiments and projects that reinterpret national symbols.

Black Bach Artsakh is a film consisting of 13 parts, and each part is woven to the rhythm of Bach cantatas. Landscaping is combined with music and human speech, becoming an opportunity to experience (both with visual and auditory senses) the issues of war, identity and belonging.

And the Forum Expanded program acts as a unique laboratory and masterpiece at the festival, as it evaluates the position of the authors and subordinates the commercial future of the film.

The title of the film Black Bach Artsakh (the presence of the word Artsakh), and especially the synopsis published on the Berlinale website, caused a furious reaction among Azerbaijani and Turkish users. Critics called the film’s descriptive text “propaganda” and “one-sided.”

The authors wrote that the film is a document that deals with space and time, and in the 1990s the movement was called a “struggle for liberation and self-determination,” until 2020 when an “invasion by Azerbaijan’s dictator” took place.

The text also mentions the Turkish side involved in the war and the mercenaries from Syria who took part in the attack on the sovereign country. 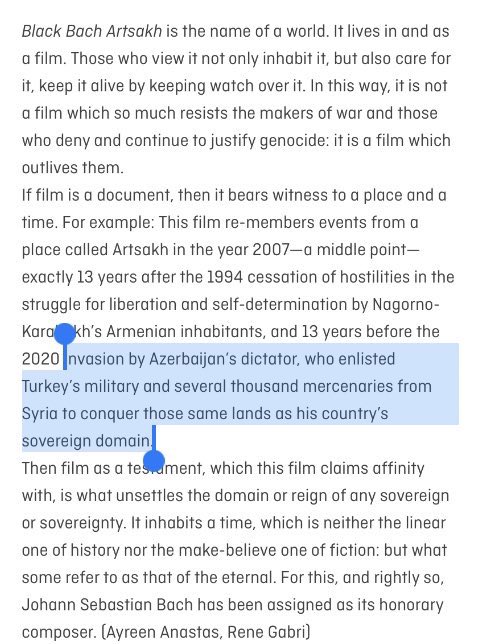 Excerpt from the film synopsis, which was later edited

Before the official premiere of the film, a torrent of criticism started at the Berlin festival, demanding that Black Bach Artsakh be removed from the official program.

The festival was forced to defend its decision and rejected the demand to remove the film from the program and called the film modern.

But it decided to soften the description style of the film and spread an announcement, saying that the authors’ text would be replaced by a more neutral text written by the festival organizers.

“We understand that the film Black Bach Artsakh touches upon complex issues and painful memories in the conflict between Azerbaijan and Armenia,” the statement said. “[But] silencing the voices of filmmakers is not the way forward.”

In addition to virtual screenings, the film is also planned to be shown in cinemas in the summer. The Berlin Festival expressed hope that the screenings and the subsequent discussions will involve everyone and that constructive dialogue will take place.

Ayreen Anastas and Rene Gabri are artists who know the value of dialogue. Both Ayreen, who has experience living in occupied Palestine, and Rene, who studies national symbols in different cultures, work in the fields of art, politics, and social activism.

And they are convinced that visual art, especially cinema, is also a soothing, healing space, especially for those whose voice has been silenced or forgotten. Their radical art projects allow them to think about where their own footsteps are in this big world, where power and politics trample people.

After all, contemporary art not only describes but also tries to change the world. And often the packaging of form and art products is as important an element as the content itself.