For many local journalists, the war in Artsakh was an experience of working on the thin border of life and death. In the first days of the war, they hurried to Artsakh, not imagining the reality they would be facing for days: constantly shelled settlements, numerous security issues, issues of mental and physical well-being.

Our colleagues covering the hostilities were both excited and scared, but they worked until the moment it became impossible to leave the shelters to get footage.

Kentron TV journalist Arthur Hakobyan worked in Artsakh during the first days of the war. He spoke frankly about how at first, there was a feeling of fear, which later turned into adrenaline. 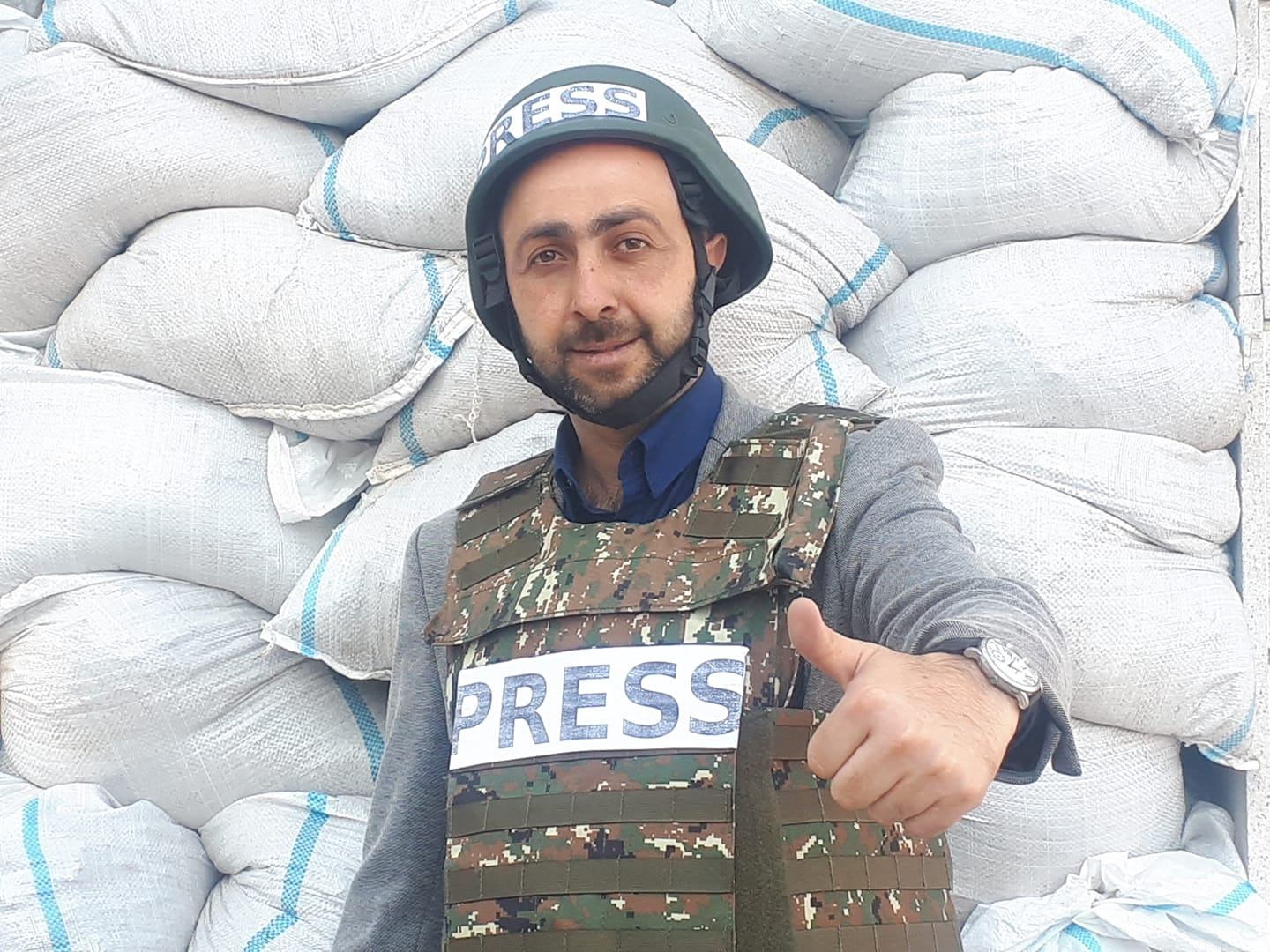 While filming in the city of Martuni, we were given appropriate notices so that we could quickly gather footage of destroyed houses, buildings, have conversations with people in safe areas, and so on.

But everything wasn’t that easy. First of all, we had to work scattered with journalists so that there would be no crowds. Then, all the while, it was very difficult to focus on working fast, because the enemy drones were constantly circling above our heads.

We were in Martuni with a journalistic group. We had finished filming, but we were not moving yet, everyone had to finish to go to Stepanakert. Since we were in a separate car and the tension was high, we decided to leave the town of Martuni, where the situation was very explosive, as fast as we could.

We were already out of town when we heard unspeakably loud noises. We did not understand anything, it seemed to us that the explosion was right next to us, there was no reception, the only consolation was the fog that could save us from the next rocket.

When we were close to Stepanakert, we got reception, everyone was calling to find out where we were, whether we were not among the journalists who had been working in Martuni that were harmed. As you know, our French colleagues and local journalists were seriously injured that day.

This was the first, but not the last case, when we had to stop filming, escape under the walls and hide in the nearest shelter. At such moments, self-defense reflexes begin to work, but it is also possible to know the basic rules of safety, to be ready to work in the very focus of combat operations.

Each time I felt the fear rising up inside me, I would shift my thoughts to the 18-19-year-old soldiers on the front line. But to be honest, there is no front line in this war․ They also target settlements and civilians.

Our film crew made all the decisions together. Even though we were staying at a hotel,  we couldn’t sleep there during our last few nights, there was no shelter. We were told at the information center that it was neither safe to film in the city nor was it safe to leave Stepanakert.

Big shells exploded more often and each time they would get physically closer to you.

We were faced with a difficult decision: to stay or go back. Many of our colleagues returned to Yerevan that day or decided to continue working from Goris.

We decided to return too. We had just left Stepanakert when we learned that the building next to our shelter was hit with a cluster bomb.

Personally, I would like to return to Artsakh again, but the editorial office has not made such a decision yet.

Mary Martirosyan was among the group of journalists targeted by the enemy drone in the city of Martuni. 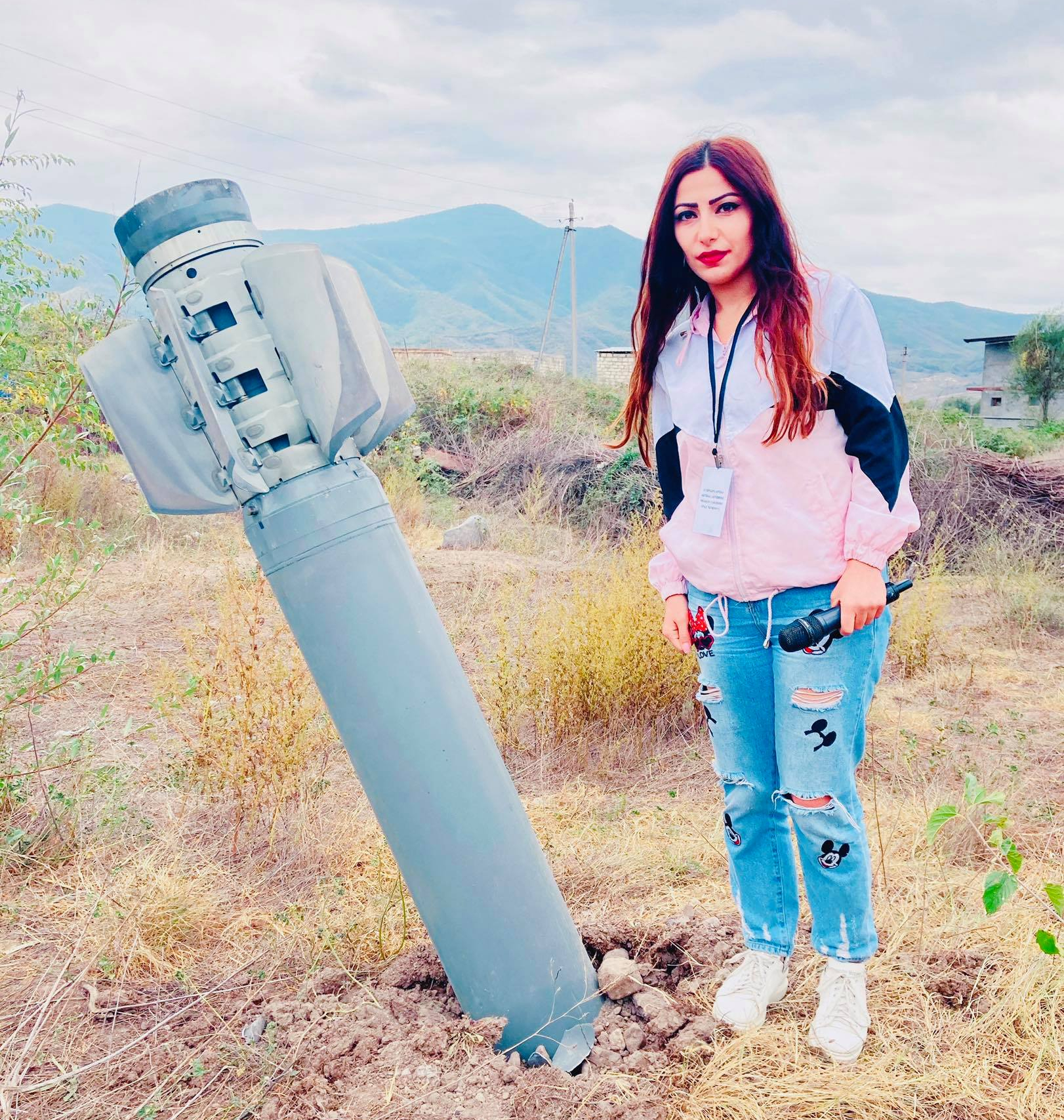 After filming the cruel story of a family in Martuni, we were returning with journalistic groups when we noticed the UAV. There was a policeman with us who urged us to get out of the area quickly.

We were all in bulletproof vests with the Press logo on them, but it was clear that we journalists were specifically being targeted.

At first, we were all concentrated in one spot, depending on the situation we started to disperse in different directions.

Then the security guard urged us to quickly pack up and go back because it was not clear what could happen to us in just a second’s time, as we were already in the center of attention.

This was my first attempt to cover war on the ground. Not so much fear as anxiety that we are dealing with a long and extremely difficult war.

When there was an alarm signal in Stepanakert in the evening, there was a moment of anxiety, but I immediately remembered that at that very moment our brave soldiers, with their militant spirit, were in a condition a thousand times worse. That they were fighting terrorists face to face, and in many cases trying not to fall victim to UAVs. My anxiety would pass immediately.

During the reports, I talked to a man who had lost a family member, we filmed houses that had collapsed due to enemy shelling … They were horrible scenes. But, all the same, the people there are strong and optimistic.

I tried not to panic under any circumstances, realizing that my videos would send tension and anxiety to the viewers.

I wanted to present the atrocities of the enemy, at the same time showing that people are not desperate, they continue to live.