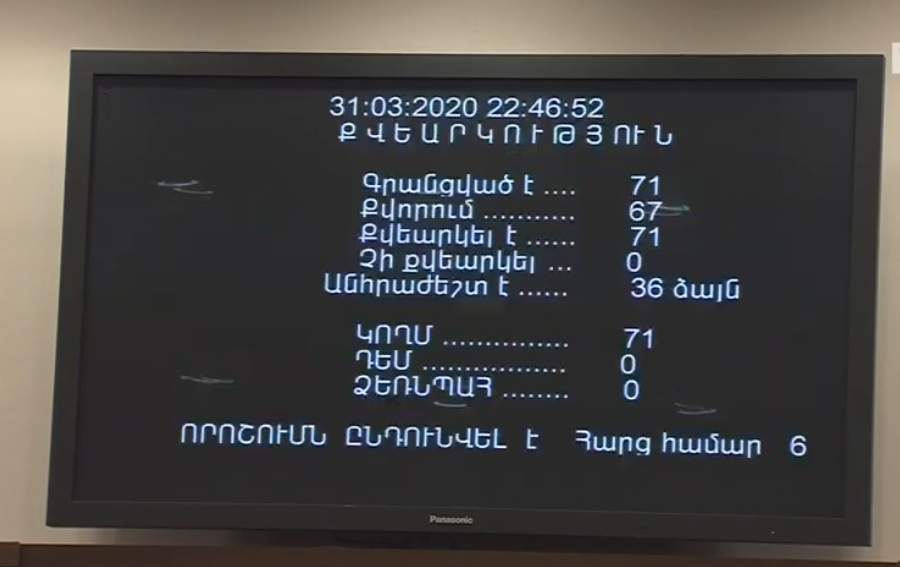 The National Assembly adopted the bill on phone-tracking people’s movements in order to prevent the spread of Coronavirus.

71 MPs from My Step faction voted in favor of the bill; there were no against and abstained votes. The opposition – Prosperous Armenia and Bright Armenia parties – did not take part in the session.

This was the second discussion of the bill on March 31. The first attempt had failed. Taking into consideration the importance of the bill, the government had submitted it to NA for the second time in a day, to conduct a discussion and voting in an emergency regime.

My Step confirmed that the Government and the Commandant’s office need to use this tool in the state of emergency caused by COVID-19. The bill allows collecting, processing and using (as required) all the data that will allow to define the location, date, start time of citizens’ phone conversations.

Commandant Tigran Avinyan once again declared that they aimed at working effectively and introducing new technological tools to prevent the pandemic.

“Based on the obtained data, an employee of the Ministry of Emergency Situations will call a citizen to inform that the person may have contacted a Coronavirus-positive case. That person should be self-isolated. The data will be obtained automatically, without a human interference,” Tigran Avinyan said.

According to Avinyan, the government would like to make the situation more controllable and to decrease the virus spread quotient, and even if just one person’s life is saved as a result of this bill, it means the measure is justified.

The bill of the second reading was a bit different from the first reading draft – it was adapted to the suggestions made by MPs.

It has been clarified that various data (including data related to medical confidentiality) related to Coronavirus-positive patients, as well as contacts of their contacts, can be used as and when required.

The bill bans the preservation and usage of depersonalized statistic data.

The requirement related to secret data is valid not only for persons transmitting the data and working with the database but also for the third parties – positive cases, people having symptoms, people undergoing treatment, as well as their contacts.

According to the government decision, it is stipulated to launch a commission in order to destroy the data collected in the days of the state of emergency. The commission may include also representatives of parliament factions and experts.

Despite these changes, Artur Papyan, the co-founder of Cyberhub, an IT support hub and a threat lab for Armenian civil society, thinks that the bill is not proportionate to the existing situation.

“The data of 3 mln citizens will be collected and processed; certain operations will be conducted. However, they don’t specify how they will use the data and what kind of results will they achieve… After all, they have to deal with human rights issues,” Papyan says.

Papyan says there’s never a guarantee that the data obtained from three service providers will not be used for other purposes, for example, during public gatherings and other events,

“They create a legislative framework and technical resources for public control. Later, there might be a temptation to make use of those data.”