The Demands And Obstacles For Regulations In The Media Field 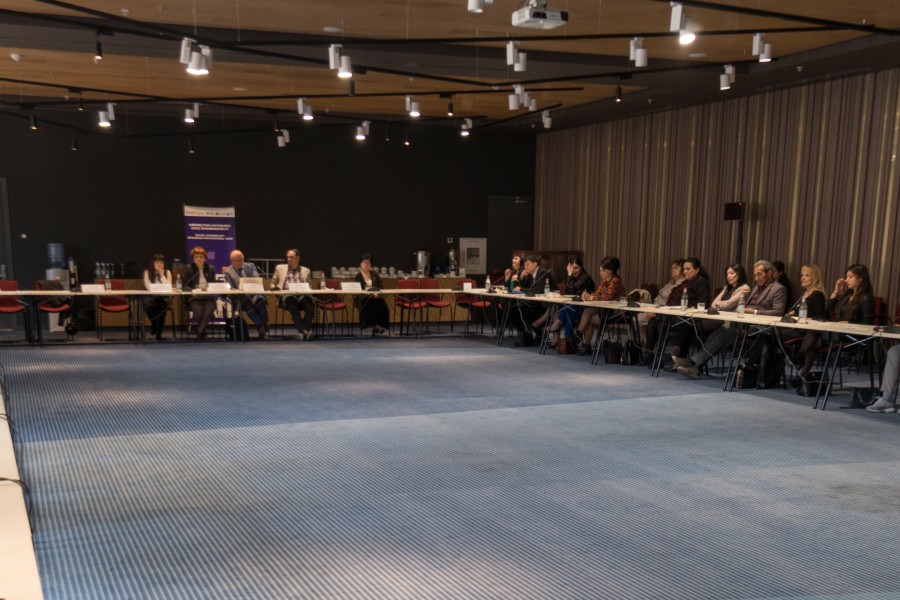 The revolutionary rearrangements that took place one year ago left a trace in the media field, which simultaneously rattles and raises public and political thought.

It was about the “Priorities of the Media sector on the Road to the Development of Democratic Institutions in Armenia,” which took place on April 26, with the widest range of participants possible.

As a result of discussions between media experts, NGOs, MPs and members of government, an attempt was made to outline the range of issues that are urgent today.

The work of the media is regulated both through legislative means and as a result of public perceptions. It is also the result of political decisions. And there are concerns at all points.

Justice Minister Artak Zeynalyan pointed out the important mission of news media as a long-term objective of keeping society peaceful and harmonious, not to cause permanent shock.

Artak Zeynalyan reminded that, in the new situation, when technology development and access to the media has turned people into constant media consumers and producers:

In the opinion of  Deborah Grieser, director of the USAID Armenia Mission, the importance of public involvement is important, as the media has always had mutual communication.

Naira Zohrabyan, a member of the Prosperous Armenia Party (PAP) faction, said that there should be a consensus between the media field, the public and political forces. “I do not agree with Artak Zeynalyan that the focus of the media should be reconciliation. The media has one goal for me, to inform the public with unbiased information without any additional spices.”

Human rights defender, Arman Tatoyan, considered it worrying that there is a misunderstanding about a journalist’s work. For example, society sometimes identifies the journalist with the person they had taken an interview with.

And the state system still has a stereotype that journalists hinder the work of state bodies. “It is important to change that biased attitude because a journalist’s work does not hinder, rather supports them, making the state structures work and keeping them accountable.”

The Ombudsman mentioned statistical data, which testified to the increase in the rejection of journalists’ requests. For example, comparing 2017 and 2018, one can say that the cases of denial have doubled. And this also means that journalists’ complaints are growing.

Speaking about the protection of journalists’ rights, Arman Tatoyan noted, “the more responsible a journalist is, the easier it is to defend them. But when a journalist is attacked with insults and threats on social networks, it is extremely important that the state responds as quickly as possible.”

Shushan Dodoyan, Chairman of the Freedom of Information Center, spoke about the raid reaction of state structures.

For example, when a journalist’s right to receive information is violated.

“In the past, many questions were left unanswered, simply thrown into a basket, now that percentage has dropped significantly, but incomplete and not fully answered and groundless rejections have increased instead. And if there is a violation of the law, it must be restored quickly. That is to say, the journalist should be given the information quickly,” she said.

Arman Babajanyan, a member of the NA Bright Armenia faction, is worried that now “a real news outlet should invest more and put extra effort in order to be different from the rest.”

“Political leaders marginalize the media and perceive it as the enemy. There is a tendency that the situation can turn into a disease, even chronic. The authorities should be open and even welcome criticism,” he said.

The prime minister’s spokesperson, Vladimir Karapetyan recalled inspirational data. For example, in the Freedom of Media Index, Armenia improved its position by 19 points and the number of journalist queries towards the government and its departments (compared with the previous year) increased by almost five times.

He also considered the prime minister’s readiness to communicate with the media and organize press conferences as unprecedented.

“The number of media outlets has grown dramatically. For example, more than 80 media outlets were present at the prime minister’s press conference and 70 questions were asked.”

In his opinion, such open work is also a precondition for decreasing fake news.

Shushan Doydoyan considered the fight against fake news, recently announced by the prime minister, where the National Security Service was also involved, as being worrisome.

“For public and professional audiences, it was not clear what the fight was against. It was a directive that gave rise to fluid and spatial interpretations, which provides an opportunity for it being used as a double-edged sword,” she said.

Since we do not have any legal formulation of what is manipulative, government criticisms can be interpreted as manipulation. Instigating the self-censorship of journalists.

Shushan Doydoyan mentioned the government’s proactive position as a counterbalance to fake news.

“If the information provided by the government is scarce, missing and incomplete, fertile ground is created for spreading gossip and false information. When the official information is delayed or given incompletely, mold begins to spread. If there are light and transparency, mold will not have the opportunity to develop.”

“The dissemination of false information is a consequence, and fighting against it does not make any sense if the causes are not eliminated,” said Shushan Doydoyan.

For example, journalists have the right to access information and the media outlets ensuring financial transparency.

The problem of misinformation and false information is urgent all over the world, but no effective regulation has been found yet.

Most participants in the conference believe that it should be done tactfully and carefully, using a few tactics.

Everyone feels the need to regulate the media field, but in order to avoid attempts to restrict the freedom of expression or censorship, it is desirable that the initiative is launched from the media field.

Representatives of the legislative field were also of that opinion. MPs Hovhannes Hovhannisyan, Gayane Abrahamyan and Naira Zohrabyan are convinced that legislative changes should start not from the top, but from the bottom.

“These are difficult issues. All the initiatives in the European Commission reached a point where we stop and say that this might harm freedom of speech,” said Naira Zohrabyan.

The “Law on Media” regulates only print media, while online media remains outside of legal acts.

One of the most pressing issues is the transparency of media owners and financial resources.

Naira Zohrabyan said, “And let no one say that any media outlet in Armenia is absolutely free from political interests today, Until the media cannot economically serve itself, there will be no freedom. These problems existed before the revolution, and now they are sharpened and are rising to the surface.”

Director of the Media Initiatives Center Nune Sargsyan likened the revolution to a vaccine, which was introduced to society, activated the processes taking place in the public organism.

And since many problems have stretched over many years, getting no solution, now is a good opportunity to generate regulatory formats.

The conference was organized by the USAID Armenia Mission, the Yerevan Press Club and the Media Initiative Center.