#ElectricYerevan Criminal Case Is Suspended, Journalists Will Appeal The Decision 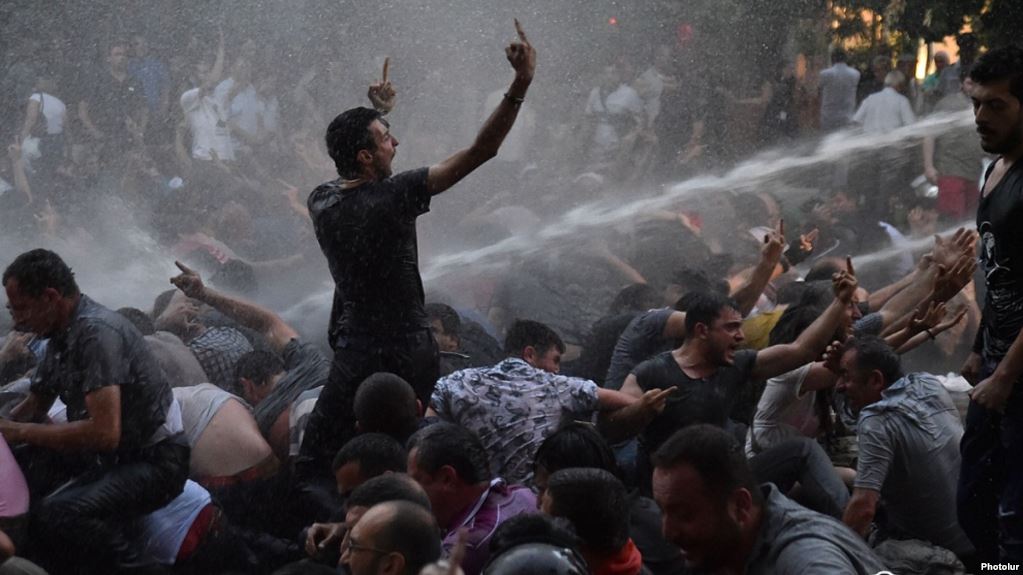 The Special Investigative Service decided to suspend the investigation of the #ElectricYerevan criminal case, reasoning that the persons involved were not known.

3.5 years have passed since #ElectricYerevan, but those who hindered journalists’ professional activities and have subjected them to violence have not been held accountable.

Four people were prosecuted in the criminal case, which, according to the Committee to Protect Freedom of Expression (CPFE), is not equivalent to the volume of violence against media representatives that day.

The decision by SIS will be appealed. Ashot Melikyan, chairman of the CPFE representing the interests of the journalists in this case, and Artur Sakunts, head of the Helsinki Citizens’ Assembly Vanadzor, stated this.

About 30 journalists have been recognized as victims based on the facts initiated on the #ElectricYerevan criminal case. Aside from that, according to reporter Tehmine Yenokyan, nothing else has happened over the course of these years, “Maybe there have been 1-2 police lineups and they might have found someone, but there were no serious changes in that sense.”

“It was assumed that after the revolution the guilty would be revealed and the perpetrators would be punished, but on March 4, we received the SIS decision that the case was suspended,” says Tehmine who suffered in 2015, during the operations on Baghramyan Avenue.

She said that after getting the decision about the suspension of the case, she began to dig for the pages of people, all the data at her disposal. As a result, she revealed 10-12 perpetrators of violence and revealed and published data. “Some of them have been given posts and it’s clear why these people are not identified, and why the SIS does not want to find these people. I do not want to insist that these people have done the harshest of actions, but that they are questioned at least as defendants and witnesses,” said Tehmine.

She has also appealed to the European Court of Human Rights with the #ElectricYerevan case. “We are waiting for the verdict, we have to state that we will have to pay compensation from our state budget and that we will compensate for the violation of our rights.”

The conclusion of this case is important for journalists in the sense that such developments in the future would be prevented. A precedent should be established that the use of violence against a citizen and a journalist is a criminal offense.

Despite this, Tehmine has no great expectations on her part. “The system has remained the same, it serves the values of the old system, which is not aimed at disclosing things, but concealing them.”

Photojournalist Gevorg Ghazaryan had also suffered during the #ElectricYerevan incident and says that he will appeal against the SIS decision. “I will take it to the end, and now it is a matter of principle. The only goal is to show that no such option will be accepted from now on.”

He thinks that those who were involved in the investigation of the case are “sitting with their hands crossed,” and actually are doing nothing and that a lot of things have been left unknown. “The inactivity of that time has brought us what we have today. These bodies should understand that they have done a sloppy job and should be punished for it,” said Gevorg.

He says that the expectation is that people will realize that their shortcomings will not be forgiven; the victims are persistent and will not be stopped. “I would like to be compensated for my equipment if possible. We will go to the end, and let’s see who is more stubborn,” adds Gevorg.

He appealed to the UN Human Rights Commission on #ElectricYerevan and has been encouraged to exhaust all available Armenian remedies. “The United Nations probably has confidence that they will work more consistently after the change of power.”

Journalist Mkrtich Karapetyan’s camera was damaged during the use of water on Baghramyan Avenue. He says that during the pre-trial investigation, he went to the interrogation, and after a long time, the investigation of the case had been stretched out.

The SIS decision was also a surprise for him. “The SIS has probably got a lot more important cases, that they decided to take this off the list. I cannot imagine how people can beat each other in the main avenue of the city, and then find out that they cannot find those who are guilty.”

He still does not know if he will appeal the decision or not. He says that he should consult with an attorney.

The expectations of journalists are also not high for the continuation of the investigation. He says that he does not see any change in that aspect. “There have been many cases of hindering and violence against journalists. It’s during the investigation of cases like this that the attitude of the government shows,” he added.

Hakob Karapetyan, who was a journalist during the #ElectricYerevan incident, and now is the mayor’s spokesperson, is also familiar with the SIS decision.

He says that the case is important. “It is very important as to how the state responds to violence against a journalist. The reasons for the delay in the investigation after the events of June 23, 2015, and in essence their absence is more or less understandable, but the current investigation process is incomprehensible.”

“After the revolution in 2018, in September, there were conflicts with the major actors, and it was a signal for me that the case was moving forward, but after that, nothing happened again before I was informed about the suspension decision,” said Hakob, adding that he would be appealing the decision.

According to him, notwithstanding the fact that, at the time, he had a different status compared to now, it is important that the issue is resolved.

“If at the time I proceeded from the presumption of concealment for political motives, now I am convinced that the investigative bodies are not constrained by anything and I hope that in any case, a proper investigation will be carried out. I do not rule out that it is more complicated to carry out the action after 3.5 years and finally getting the image of the guilty, but there were so many people there, and everything was so obvious (a lot of shots, testimonies), that it should not be too difficult.”

Hakob says that the perpetrators must be disclosed in any case.

“I do not think that middle-ranking police officers were the initiators of the operation. We know that four people have been tried, but I am convinced that they did not vie the orders,” he said.