From ‘94 To Today: Authorities In Editorial Offices 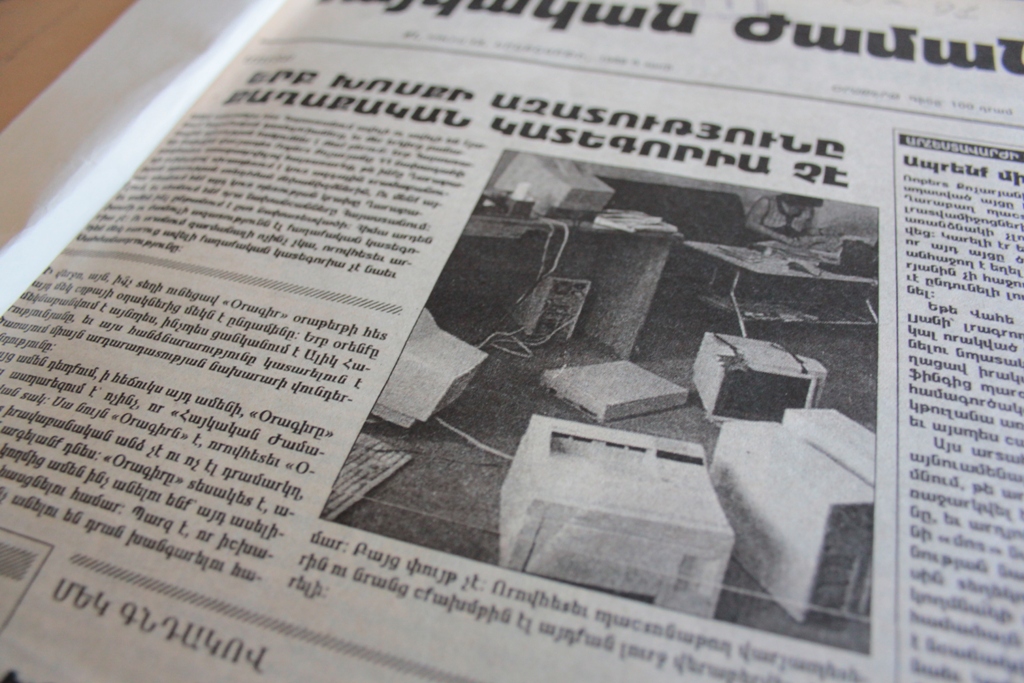 On September 17, the search and seizure which took place at Yerevan.today’s website’s editorial  office by the 6th Division of the Police and Investigative Committee’s employees is not the first case of an invasion of mass media by state bodies.

There are so-called classical textbook cases in the history of independent Armenia.

The most “impressive” of these is probably the story of Levon Ter-Petrosyan shutting down the ARF and terminating the activities of ARF media.

On December 28, 1994, Ter-Petrosyan made a televised statement on stopping the ARF, after which the power structures invaded the party offices, including the editorial offices.

Gegham Manukyan, coordinator of Yerkir Media TV’s political programs, recalls that 13 newspapers were closed in one day and their property confiscated. The Dashnak Printing House had also been closed.

Moreover, that was done without a court ruling, the confiscation without any warrant. Computers were thrown from the third floor windows of the office where the editorial office of Yerkir newspaper was, straight into dumpster trucks.

Azg daily referred to what happened in its last edition in 1994, two days after the incident.

“The activities of Yerkir and Azatamart newspapers, as well as Haylur news agency have been suspended. The publication of Aragast and Munetik newspapers have also been interrupted. These are not part of the ARF, but heir editors are close to that party.(…) According to MP Garnik Isagulyan, even if they are allowed to work with computers, they are technically unable to do so. When they were working with computers, all the computers and technology were simply thrown into cars. According to Kim Balayan, the course of the search was far from the law and what is considered legal. There was no prosecutor’s sanction, nor the decision of the investigator.”

Months later, on July 13, Nikol Pashinyan resumed publishing Armenian Time daily, considering it to be the heir of Agenda.

The first page of the July 13 issue is a small editorial signed by “N.P.,” where Nikol Pashinyan writes, “the political categories in Armenia are decreasing each time, and our country obtains the characteristics of a banana state. (…) Now freedom of speech and the press is not a political category. (…) Agenda is in the arena again, it’s ok that it’s under the name Armenian Time. It is the same Agenda, because Agendi is not a legal entity or a cash register to close or block. Agenda is a point of view and has something to say.”

On November 9, 2009, the authorities suspended the activity of the newspaper, The Fourth Estate. A newspaper called the fourth sovereignty was published the very next day.

The name is justified such in the first issue, “Yesterday four staff members of the RA Ministry of Justice had been present in our editorial office, who had been sitting for hours and were waiting for Mher Ghalechian, the director of August agency and Davit Matevosyan, the director of the Affiliated Persons LLC. The problem was that the bailiffs had to provide the appropriate persons with the decision of that the JACEA to ban the printing of the newspaper. According to the execution paper issued on 06.11.2009, the publication of The Fourth Estate daily must be banned in any printing house.

Taking into consideration the serious challenges faced by Armenia and the dangerous developments caused by the, The Fourth Estate newspaper is temporarily leaving the territory of the Republic of Armenia, giving its place to the Fourth Sovereignty.”

The slogan of the first issue of the newspaper was “The estates have died, long live sovereignty.”