#Tvapatum18: See The Media In The Person And Vice Versa 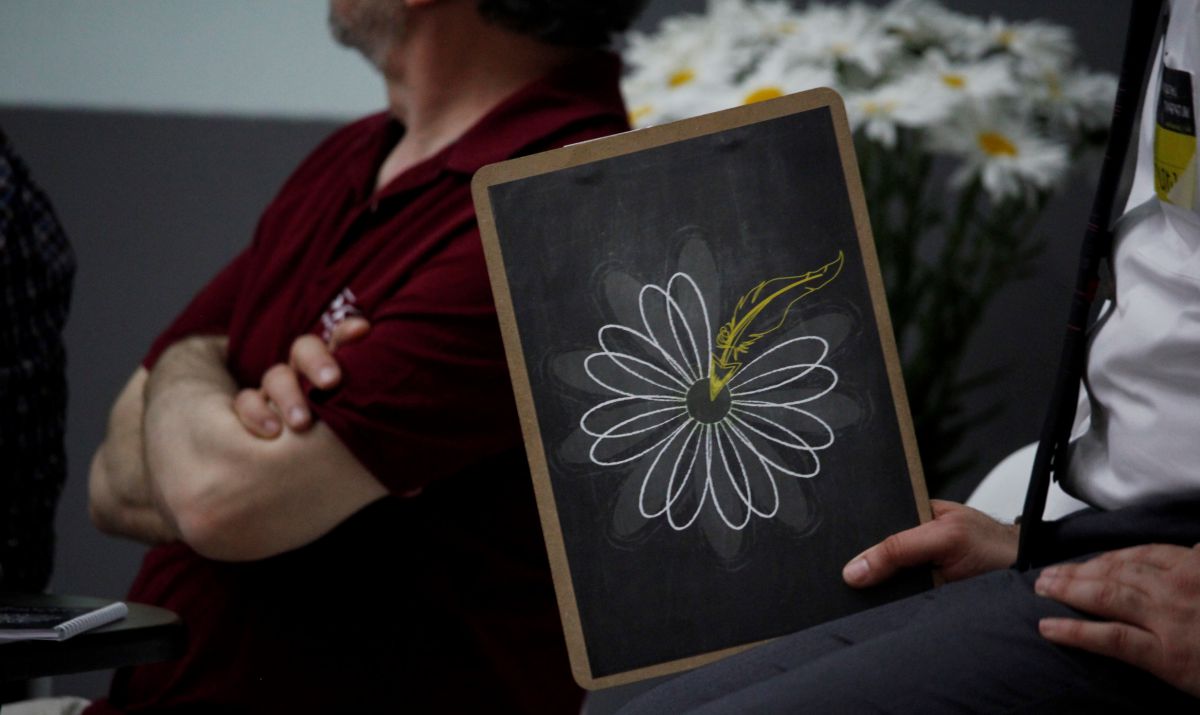 The theme of this year’s DigiStory Media Conference was built on the role of the public and individuals.  The human factor in news flow and the messages of media are especially interesting to study now, when any person can fulfill the role of the media themself, retrieving and redistributing articles, social media posts and videos. Including false or inaccurate information.

Speakers and experts from different countries have come to Armenia to talk about different capabilities including, education (self-education), restraint (self-restraint), analysis and differentiation.

As shown by the Armenian Velvet Revolution, media platforms and tools are used very well to inspire people, motivate them, and for solving public issues.

People are the Media: and it’s natural that people don’t want to be lied to.

Verification as a new kind of journalism

“Fact checking and double checking has never been so important as it is today. Some media outlets deal with only that work, finding fraudulent information. Like us, for example,” said Jim Fry, editor-in-chief of the website poligraph.info.

During the conference, he told us how information is being qualified, and how their website then gives a conclusion about it.

“Actually, the information can be true, not false, but misleading and confusing. Websites which are involved in fact checking need to take into consideration many factors, study the big picture. If you think that you need an army of journalists to do fact checking, you’re wrong. Using open data and investigations by other journalists is enough.  I think that fact checking can become a developing, progressive journalistic genre, as new stories are created from the stories that we check,” said Jim Fry.

“We do our own fact checking and our journalists have a specially created platform for media criticism, because we believe that it helps the media to self-regulate,” she said.

Hetq journalist, Hrant Galstyan told us how facts were being checked during the Armenian Velvet Revolution, when events were developing so quickly that it was difficult to take a moment to check the news.

“There was an impulse to be the first to publish, and it was extremely important to publish information as soon as possible. Understandably, the probability of making a mistake in such a situation was high, and the tools at our disposal were likely to be unhelpful, especially when we were dealing with official information. Sometimes you need to rely on your own knowledge and experience and take into consideration the structure and style of the statements, examine which online account is spreading the news, where is the link to the original source… There is a rule, if you feel like the information is not convincing, don’t share it,” he said.

“It is important to be self-motivated during times of serious events. Of course we are trying to involve different people to spread information, but the priority is not the act of spreading, rather not placing people under attack,” she said.

The reinterpretation of public and mass media

In such a reality when each person becomes a channel for consuming and broadcasting, public television and radio take an extra function upon themselves. That is, to formulate the boundaries of public interest and mass interests.

Editor-In-Chief of VPRO (Dutch Public Broadcasting), Stan van Engelen presented how they try to solve the issue using marketing steps. That is to say, transfer public knowledge to the market with the help of platforms with a wide market.

“We understood that the audience of Dutch public television and radio is older, and only people over the age of 50 were watching us. We started to take action. The first thing we did was eliminate the barrier between the radio and television marketing departments. We created a new working system whereby each team produces a program and deals with its progress. We focused less on television, and social media was no longer a derivative. We decided that television isn’t what’s important, the audience is,” he said.

Stan van Engelen attaches importance to the role of public television, because it’s easy to do what private channels do while getting the approval of the audience in an easy way.

“It’s actually difficult to be different,” he said.

According to the Executive Director of Armenian Public Radio, Mark Grigoryan, public media broadcasting is media for everyone. “I always say that,” he said. Then added, that there was and isn’t any censorship on the radio, and unlike television where, according to him, there are pressures and  that is not a secret to anyone.

Russia’s Dozhd TV Producer and Host, Mikhail Kozyrev, noted that an important component of the media is the ability to show what is happening outside the window.

“No matter how strange it may seem, no one in Russia did it. Our channel, by giving live broadcasts from the streets and protests, gained a large audience. Even that didn’t help us and they started a campaign against us. At the same time we were trying to work operatively, and convey what was happening outside the window, not a made up story about life,” he said.

The work of media in education

Media literacy courses are a component of many media organizations.

American Newseum education program’s Vice President Barbara McCormack has extensive experience in communicating with media consumers and especially children. American Newseum is a museum-workshop, which is actively involved in organizing game-award ceremony on information and misinformation.

“People don’t like it when they are dictated to. It’s better to work from the bottom up to have a media literate audience, to achieve the desired outcome via educational efforts. Everything must start from schools, and different cultural institutions should continue the work,” she said.

During the DigiStory Media Conference, she gave a Master Class in which she presented the work she did with children to teach them about fact checking and how to differentiate them. After all, fact checking is very interesting work full of adventures.

WGBH TV has many media literacy projects for children. Senior Executive Producer Bill Shribman says that in the case of children, grouping them according to age is important, for example the material supplied to 6 year old children should be different from the content and style given to a 9 year old.

“Effective animation clips, educational programs and shows on community life. The child should become a part of the game, the product that will make them a media expert,” said Shribman.

Eyewitness velvet accounts though the eyes of a journalist.

The most emotional stories of DigiStory were about the Velvet revolution. The revolution was one of those rare cases when the happenings of weeks didn’t tire journalists, rather encouraged them. They were covering the events with faith, confidence and persistence.

The decentralized developments forced journalists to walk endlessly, to take shifts yet stay in the editorial offices, to cooperate with other media, to get confused by the speed but stubbornly persevere. Their work was revolutionary.

“I couldn’t imagine that a revolution would happen, and that I would lose 12 kilos. We all worked together, cooperatively so that we could cover all of the decentralized activities. Many  journalists, including myself, were also working with smartphones,” said Narine Ghalechyan, RFE/RL Azatutyun Journalist. 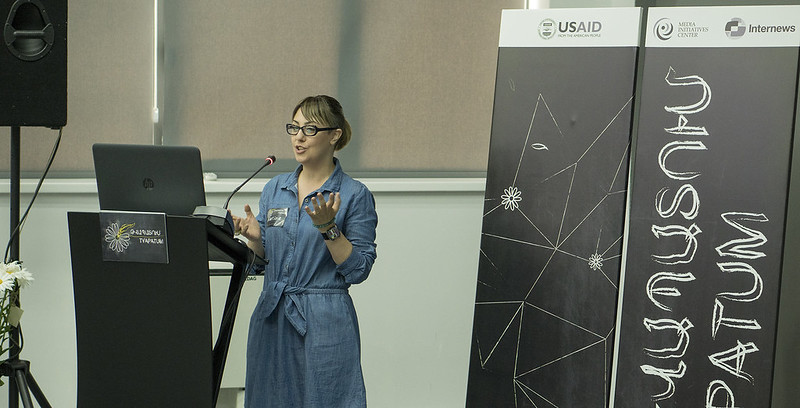 During the overall enthusiasm was teamwork. The journalist said that she was unable to communicate with her colleague on the scene, because they were providing live broadcasts at several points simultaneously.

“Our video team was doing a great job, which was both difficult and in the background,” adds one of the many reporters who were working actively during the revolution.

CivilNet’s Editor-In-Chief Karen Harutyunyan opened up about how during the confusing days of the revolution, citizens helped them a lot. They sent videos from different streets and communities, helping to cover events from points where the media did not have a reporter.

“The Velvet Revolution was different than campaigns of previous years, because the coverage was decentralized. It was difficult to work with the resources that we had. On the other hand, the role of traditional media is changing in such a confusing situation, there was a risk of spreading false information,” said Karen.

EVNReport told the world about the revolution in English. Editor-In-Chief Maria Titizian said that they had adopted a principle that they would not spread unverified information.

“We were unable to cover everything, but it was important to tell the international community what was going on in Armenia. We didn’t have the capabilities for video, we transferred the situation with photos.We would write short posts on Twitter,” said Maria.

“Students, citizens and members of my family united to work on the coverage,” adds the head of the media outlet.

BBC Correspondent Rayhan Demytrie’s feelings were especially interesting. She covered the events with the same enthusiasm as local journalists, she waited and believed in the revolution in her heart.

“On April 17, I came to Yerevan for a day to cover Serzh Sargsyan’s election and the protests. I saw the hope in the eyes of people on the street. Though I had gone back to Tbilisi, I knew something would change, I couldn’t rest easy. I came back,” said Rayhan.

The journalist noted that during the days of the revolution, people were open to speak and express their attitude. There were many emotions and expectations, everyone was being frank, everyone was taken by Nikol Pashinyan. “I think that is normal. It was hard not to sympathize with Pashinyan, as he walked into everyone’s home.”