Shut the Doors, the Media Is Coming 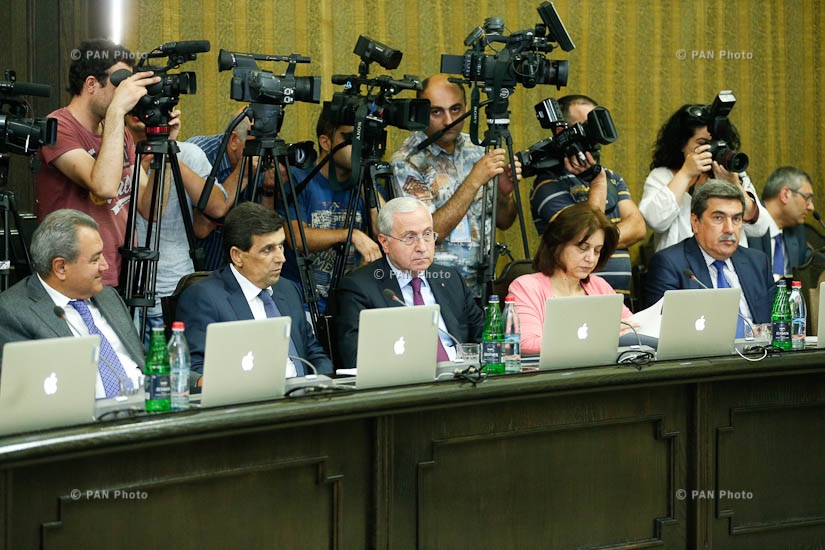 According to a new draft law, government sessions will be behind closed doors. That is, journalists will not be able to follow the meetings on the large screen in the government’s press room.

Moreover, with the bill, without the prime minister’s permission members of government will be unable to disclose details from the session.

Accredited journalists, as a rule, use this opportunity and get many of their questions answered first-hand. Or follow the relationships of government members, mainly ministers, during the meeting.

The meetings can sometimes get heated, the prime minister may not agree with a report, complain about the bill’s long-term development, make a rebuke, or simply banter.

Those that are most full of intrigue are the Yerevan City Council meetings, which are currently public, but at the same time endangered for media coverage.

On February 19, an unpleasant incident occurred between journalists and head of the Department of Information and Public Relations at Yerevan Municipality Artur Gevorgyan. He asked journalists to leave the Municipality’s building because they violated the internal regulations.

“The part of the internal regulations that pertained to journalists should have been available to journalists. Even if it was posted inside the building and published on the Municipality’s website,” says human rights organization Rule of Law lawyer Davit Asatryan.

According to him, the public relations officer’s actions are questionable. “Does a city hall employee have the right to order police officers to take action, was its execution lawful without discussing the matter and making a decision? In this case, only he whose position has such a jurisdiction could’ve made a decision.”

The lawyer says that in such situations journalists should ask to see the written version of the state body’s administrative act, where there would be the justification.

According to Asatryan, the desire to make the sessions closed-door cuts the chord between the government and the public, and makes the government’s work less accountable.

From the journalists’ response it was clear that they didn’t know what regulations were being referred to, since at that moment they were in the public space, upon Yerkir Tsirani party leader Zaruhi Postanjyan’s invitation, to present a number of problems.

Prior to leaving the municipality building, journalists managed to video-record some employees playing cards during work hours in one of the service rooms, as well as the parking lot where the party’s service vehicle is prohibited from entering.

Hours after this incident, Mayor Taron Margaryan held a work consultation and instructed to present a proposal to regulate journalists’ work in Yerevan Municipality’s administrative buildings.

“At the next Yerevan City Council meeting and after that, journalists again won’t have the right to be present and work in the council auditorium,” said Artur Gevorgyan in conversation with RFE/RL’s Armenian Service (Azatutyun).

To cover the sessions, news outlets henceforth will be provided with a separate space, and if, as Gevorgyan puts it, any sort of hooliganism happens, the meeting chair my decide to continue or suspend the broadcast.

Media organizations in a statement they disseminated have asked the Yerevan City Council not to allow provisions of the regulations to be adopted that will unreasonably restrict journalists’ work at city hall.

After the initiative to make the government sessions closed-door, Freedom of Information Center of Armenia President Shushan Doydoyan was afraid that the issue of municipality, regional administration (marzpetaranner), and court sessions being closed-door would be circulated.

“Since the adoption of the freedom of information law, all our achievements in the last 10 years are seriously jeopardized. Journalists must be unified; the issue won’t be resolved only with alarm calls and published news stories,” says Doydoyan, adding that the government can’t currently counter their justifications.

As for the incident at city hall, in her words, only accredited journalists can work in the building, while before entering a service room you must have the employees’ permission, as that’s considered a person’s personal space.

Union of Journalists of Armenia President Satik Seyranyan asked for a meeting with the mayor on the topic of obstruction of journalists’s work at city hall.

At that meeting, Taron Margaryan said the restrictions stem from the journalists’ interests, who from now on will have opportunity to work “under more transparent, comfortable, and effective conditions, from which Yerevan residents will benefit.”

Journalists as defenders and guarantors of public interest have unwittingly thrown up for discussion the idea that public and official interests don’t always coincide.