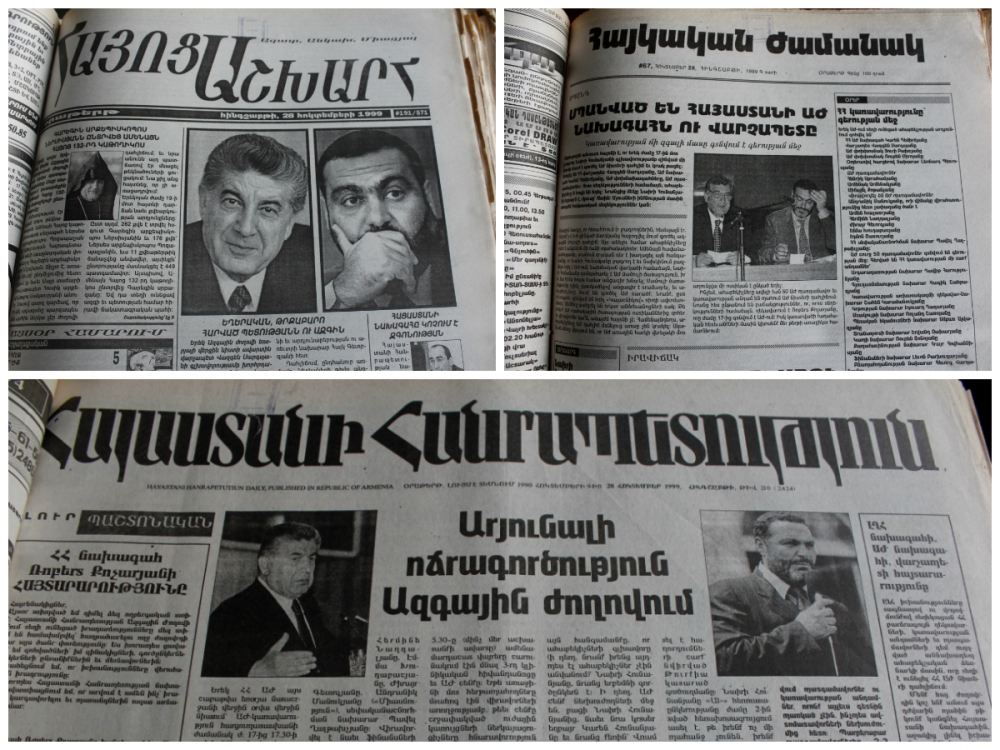 In 1999, Armenia’s newspapers were still influential. Reports on the days following the October 27, 1999 terrorist act conveyed the new reality on the morning of October 28.

Hayastani Hanrapetutyun (Republic of Armenia) described what happened as a “bloody crime.” 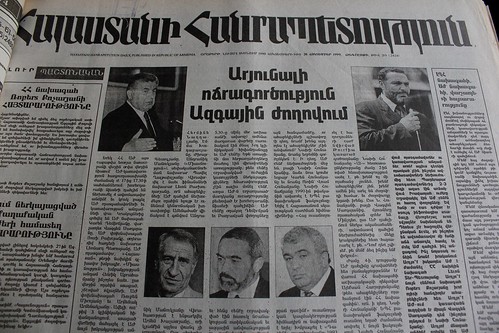 Haykakan Zhamanak (Armenian Times) wrote that the Armenian prime minister and parliamentary speaker were killed and informed that “a significant part of the government is held in captivity” (the paper was sent to the printer at night, when the hostages weren’t yet released). 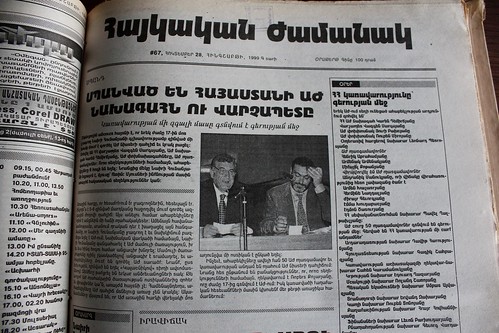 Yerkir (Country) published a black rectangle on its first page instead of a photo. 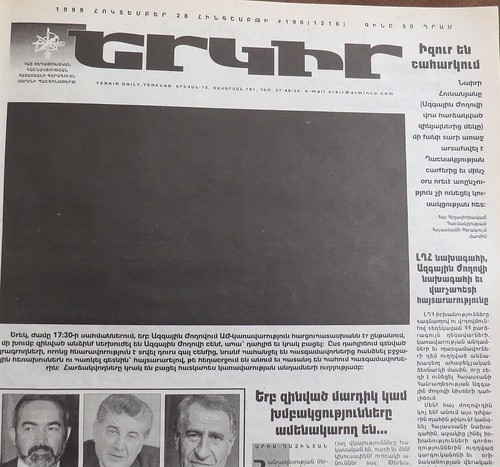 Hayots Ashkharh in its October 28 issue broke the news that the state and the nation were delivered a “tragic, Turkic” blow, while then president Robert Kocharian called for vigilance. 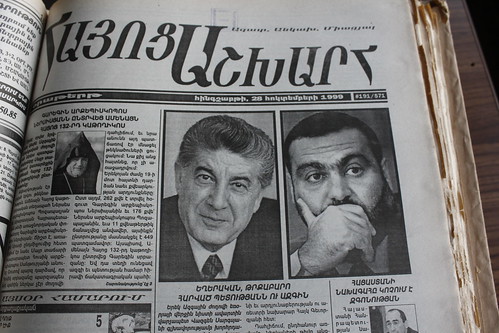 In the same issue, Hayots Ashkharh published a few anecdotes. One was about how a real mother-in-law should be and how King Salomon by commanding the child be cut in half was able to determine which of the two arguing women was his mother-in-law. 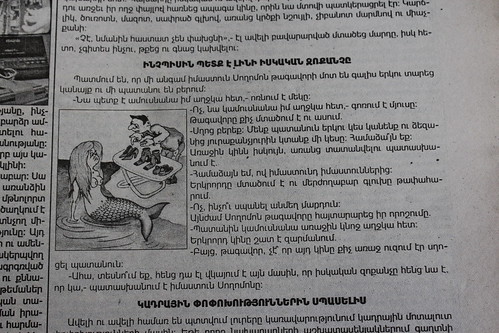 Along with an article titled “This isn’t a portrayal of Armenians” in the paper’s October 29 issue, where citizens of different occupations provided an assessment of what happened, published was a quite remarkable photo that hasn’t lost its relevance to date. A soldier tries to obstruct a camera operator’s work. 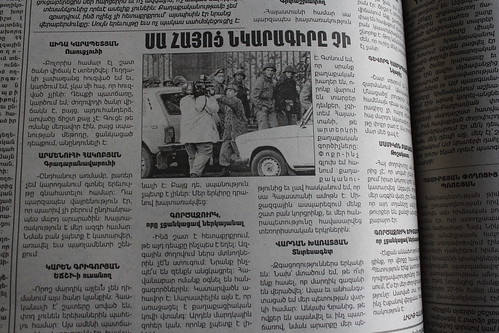 In Iravunq’s October 26 issue, one day before the tragedy, published on the first page was a cartoon, where Vazgen Sargsyan and Robert Kocharian are fighting for the position, that is, the power to distribute positions, and they’re distributing secular and spiritual positions. 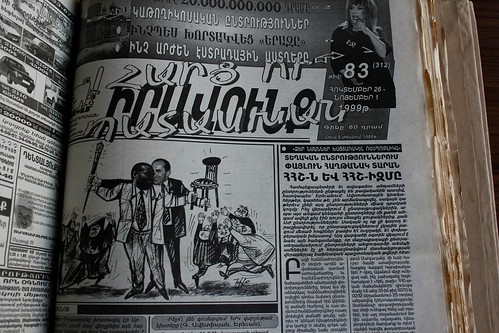 In the October 29 issue, two days after the shooting, Iravunq tried to analyze whether the incident was favorable for external or internal forces. “Since there was a strong pro-Russian wing in government in Armenia in the face of Sargsyan and Demirchyan, … it can be assumed that the National Assembly bloody events were encouraged and planned by special Western services,” according to one of the theories. 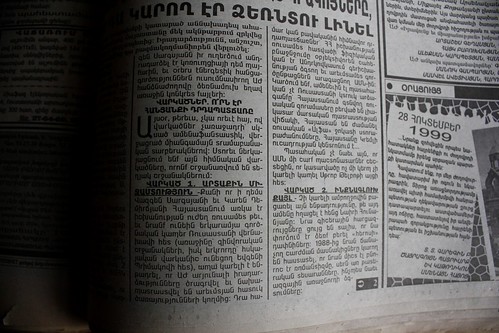 Not even the weekly sports paper Futbol+ (Football+) bypassed the bloody parliament events. “The people are shocked; the world, surprised,” wrote the paper, offering its condolences to the victims’ families. 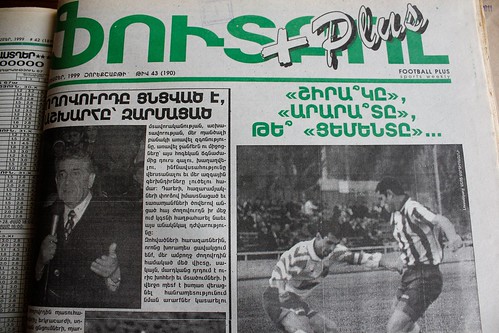 Haykakan Zhamanak in its October 28 issue tried to understand: how did 5–6 armed men manage to enter the National Assembly hall? While in a piece called “Black Wednesday,” the paper claimed the choice of day wasn’t accidental: US Deputy Secretary of State Strobe Talbott was in Armenia, and law enforcement officials’ attention was going to be mainly on that visit. Catholicos elections were taking place at Etchmiadzin, and the tense pre-election atmosphere was going to focus greater attention toward Etchmiadzin. Nevertheless, according to the paper, what happened was against Vazgen Sargsyan. 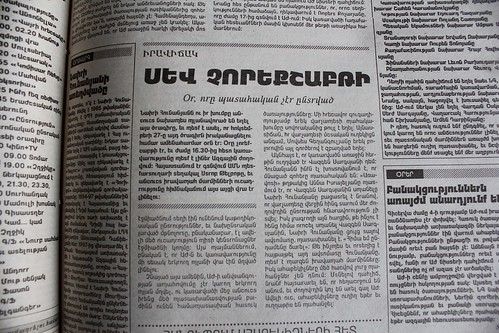 Haykakan Zhamanak journalist Zhanna Aleksanyan, currently a human rights defender, in the article “The terrorists already have defenders” writes, “No matter how strange it is, attorneys from Armenia’s  lawyers’ union have assumed their [terrorists’] defense; that is, their defense is carried out by the state.” 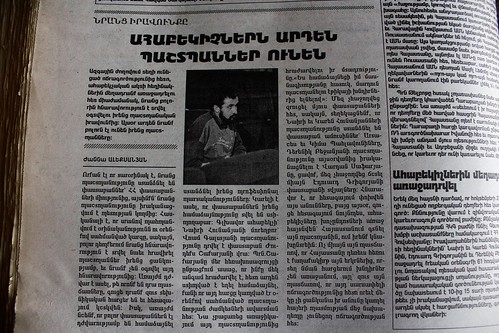 Hayastani Hanrapetutyun talked with citizens, asking them to assess what happened. Sixth-grade student Arman says, “It was like a real thriller [like in the movies]. If I had a gun, I would kill them too; it would be an Armenian thriller.” 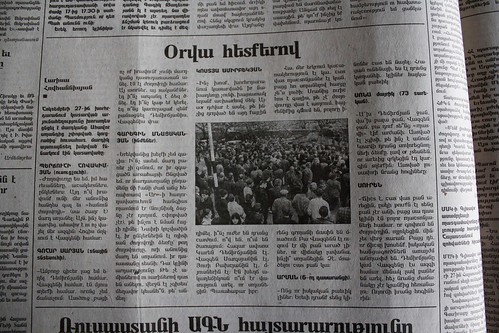 Aravot daily’s main headline in its October 28 issue was “The ideological murderer.” 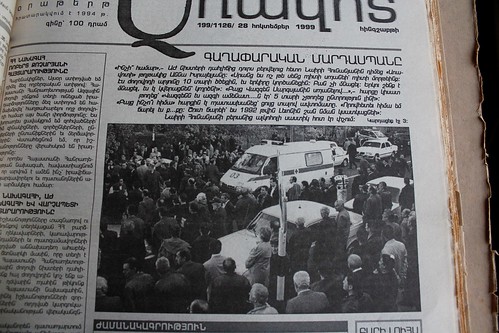 In the issues following the October 27 incident, driven by the stunning speed of the development of events, the press was rich with theories. Maybe it’s unusual, but those days the special criticism of the print media wasn’t yet sharp. That apparently was also conditioned by the complicated situation that was created.