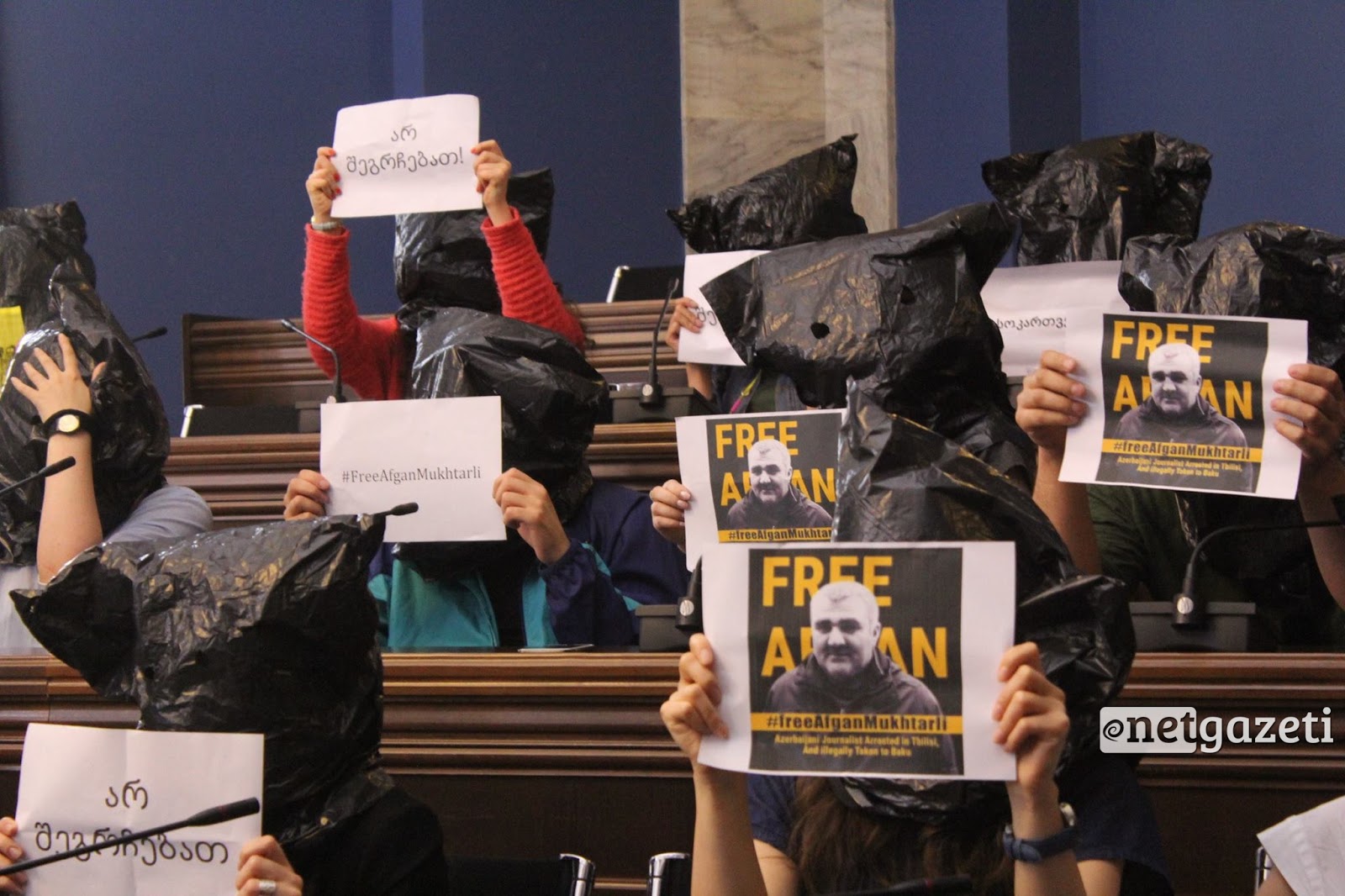 Georgian journalists are asking the authorities to investigate how Azerbaijani journalist Afgan Mukhtarli, who was living in Georgia, was kidnapped from downtown Tbilisi and resurfaced in Baku. Black plastic bags are the symbol of their demand — they are an integral part of the journalists’ campaign.

Afgan Mukhtarli, who disappeared from Tbilisi on May 29 and appeared in Baku without a passport, told his lawyer that he was taken from Georgia to the Azerbaijani border with a bag over his head.

According to the Azerbaijani journalist, he was kidnapped by Georgian special services and transferred to Azerbaijani law enforcement. He also said that they put 10,000 EUR in his pocket at the Georgia-Azerbaijan border. In Baku, he was sentenced to three months of pre-trial detention for smuggling and illegally crossing the border.

The Georgian authorities deny their involvement in the kidnapping and consider the preliminary conclusions unacceptable.

Georgian journalists are demanding an explanation from the authorities on the incident with their Azerbaijani colleague.

Besides constantly discussing on news broadcasts and televised debates the subject of Mukhtarli’s kidnapping, Georgian journalists are taking to the streets.

In parliament on June 6, they put black bags on their heads, this way protesting what happened with Mukhtarli.

With #FreeAfgan signs, Georgian journalists are asking their authorities to investigate the shameful kidnapping case and are expressing their solidarity with their detained Azerbaijani colleague.

“Our goal is to keep this issue on the agenda until the participants of the crime are identified. There are two options: either the authorities participated in this case or in our country it’s possible to kidnap someone and cross the border outside of the authorities’ control, which aggravates the situation and raises doubts about the ability of the state,” Media Development Fund Executive Director Tamar Kintsurashvili told Media.am.

Georgian journalists consider unacceptable and intolerable having a government that participates in crime or living in a state that grossly violates human rights. They ask that all those who were involved in the kidnapping and border-crossing of the the Azerbaijani journalist be held accountable.

“We are striving towards the European Union for human rights to be protected and fundamental values to be applied in practice, not for them to remain on paper,” says Kintsurashvili.

In Kintsurashvili’s opinion, what happened with Mukhtarli will negatively affect Georgia’s reputation. Georgia will no longer be considered a safe country in terms of human rights, and this incident will be seen as a setback for democracy.

Georgia is no longer the “Casablanca of the Caucasus” and “an isle of freedom” for Azerbaijani journalists, reported the news site JAMnews before Mukhtarli’s kidnapping, noting that Azerbaijani journalists who’ve settled in Georgia are spied on and threatened, so that they stop their anti-government activities. And Georgia refuses applications for asylum, leaving the applicants in limbo.

Mukhtarli, quoted in the JAMnews story, mentions being spied on. He was engaged in journalistic investigations, including looking into Azerbaijani President Ilham Aliyev’s property and corruption in the defense ministry. Mukhtarli moved to Tbilisi in 2014 to escape from the pressure of the authorities.

A number of international human rights organizations have responded to Mukhtarli’s kidnapping and transfer to Baku, expressing their concerns over the incident. The Worldwide Movement for Human Rights (FIDH) wrote an open letter to Georgian Prime Minister Giorgi Kvirikashvili, remarking that Georgia has “a moral duty to maintain its historical role of welcoming Azerbaijani dissidents” and ensure their safety.

“This disturbing development does not only expose Afgan Mukhtarli to the possibility of torture and a long prison sentence, but also sets a worrying precedent, threatening the security of dozens of other Azerbaijanis living in exile in Georgia.”