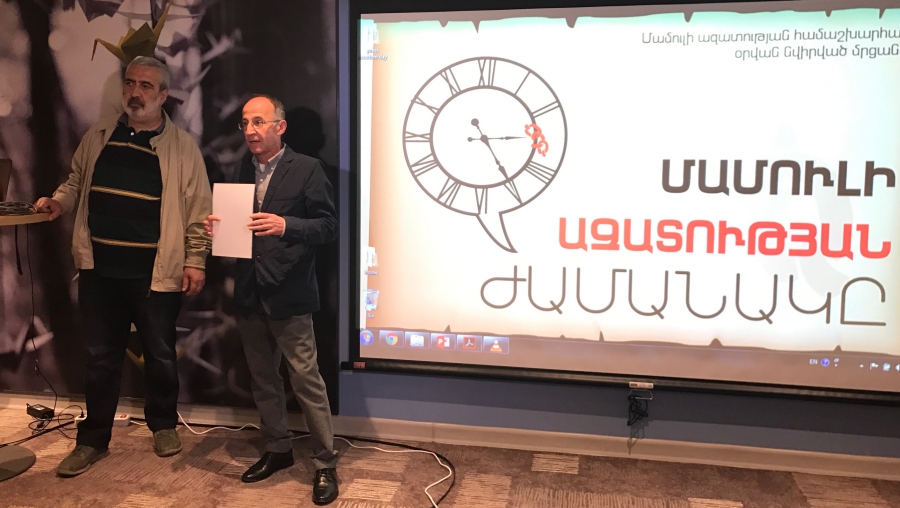 In Armenia, World Press Freedom Day, May 3, is marked with the Time for Freedom of Press award ceremony. The award was founded in 2006 by the Yerevan Press Club, Media Initiatives Center [also responsible for this site], and the Journalists’ Union of Armenia.

In 2017, the Time for Freedom of Press award was given to filmmaker Ara Shirinyan — for professional integrity.

He confesses that opportunities and possibilities are needed for young journalists’ development. “The older generation has its share of responsibility in this matter. We must help them demonstrate themselves and become established.”

Shirinyan doesn’t have a creative credo. He says if he had one rule, his work wouldn’t be interesting. “I can attach importance to the specific, smallest details because they’re more expressive, more influential than text. Generally, emotions can have a more profound effect than logic.” The subtlety of a documentarian’s work, in his opinion, is reflecting such concepts in their films.

In his films, Shirinyan doesn’t particularly adhere to objectivity. “Sometimes the subjective is more accurate than the objective; it’s just that it’s a matter of your ethics. The rule of objectivity has long stopped being applied in journalism; they skillfully manipulate with streams of information and make this a necessity. Violating objectivity is inevitable.”

2017 World Press Freedom Day has identified three main topics: importance of justice for press freedom, importance of the media in advancing peace and mutual understanding, and ensuring greater participation of the public in the media.

Actually, this day is a good opportunity not only to praise the journalism community’s achievements, but also to talk about problems. Developments in the world complicate the work of journalists, but this doesn’t mean that we should surrender. We must fight for freedom of expression every day.