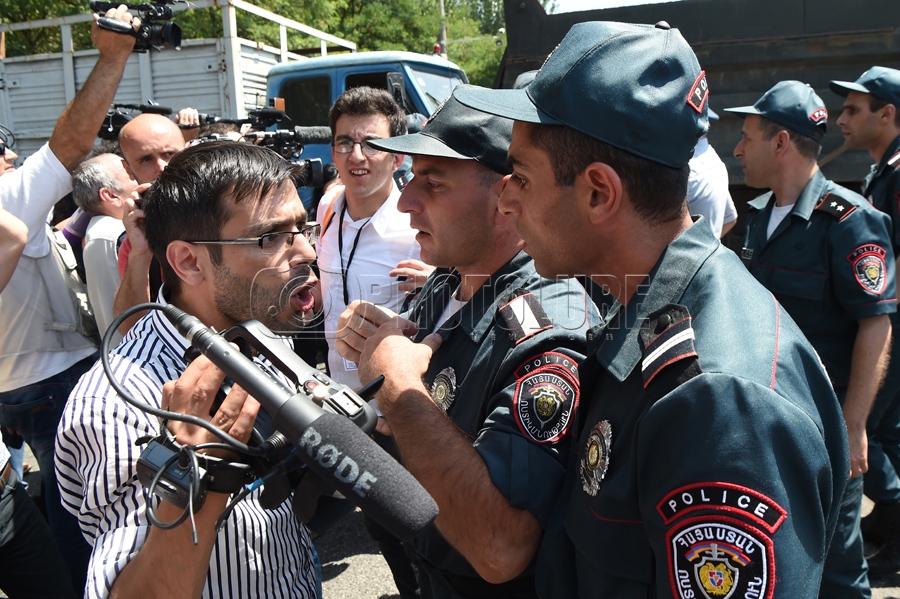 Press freedom in Armenia experienced a regression: According to Reporters Without Borders, Armenia occupies the 79th place on the 2017 World Press Freedom Index, dropping 5 places from last year.

The organization’s report states: “The print media are diverse and polarized, investigative journalism prospers on the Internet, but pluralism lags behind in the broadcast media.”

In Yerevan Press Club (YPC) President Boris Navasardyan’s opinion, the international organization’s assessment is mild. He was expecting a steeper decline to be recorded.

In recent years, freedom of speech globally has been facing new and difficult challenges. According to Navasardyan, in that sense Armenia is no exception: members of the political elite and law enforcement obstruct journalists’ activities also with the use of force, using insulting and in some cases openly brutal treatment toward them, and they go unpunished.

“Impunity is demonstrated also in court decisions, which applies to a limited number of members of law enforcement bodies. And the punishments are too lenient and disproportionate to their modus operandi,” says the YPC president.

The second problem, according to Navasardyan, is the lack of pluralism in broadcast media, to which the process of digitization contributed: the results is that there is only one TV channel broadcast digitally in each marz (province).

Navasardyan says a serious obstacle to the industry’s development is the lack of independent sources of funding, the lack of state policy fostering the sector’s development, as well as issues tied to the independent administration of justice and a hybrid democracy, and the executive branch of government, including activities beyond the control of law enforcement bodies.

Committee to Protect Freedom of Expression (CPFE) President Ashot Meliqyan likewise believes that Reporters Without Borders’ assessment could’ve been harsher, since the situation has become much worse.

“What happened at Sari Tagh and on Khorenatsi street was not the first massive case of journalists and camera operators being physically attacked. The same thing happened at #ElectricYerevan. This is systematic in nature, and the ruling authorities, particularly the law enforcement agencies, are trying to exert pressure on the work of journalists,” he says.

On the topic of the digitization of broadcast media, Meliqyan notes many regional TV stations have found themselves in a difficult situation, and the authorities aren’t taking any serious steps to solve their problems.

The CPFE president finds that there’s a need to amend the legislation regulating media activities, and the need for an adequate examination of criminal cases involving the obstruction of the professional activities of and violence against journalists.

“If the authorities don’t take serious action, this regression may continue,” says Meliqyan.

“In particular, tougher wording could’ve been used to describe the situation that occurred in summer 2016 at Sari Tagh. I consider that one of the darkest days of the history of independent Armenia, when some journalists were targeted and beaten,” says the journalist.

As for the report’s statement that “pluralism lags behind in the broadcast media,” in Hakobyan’s opinion, not only does it lag, but also there’s no debate whatsoever.

“This is done on purpose, so that political thought finally dies because debating is the ruling party’s biggest enemy,” he says.

The authorities, according to Hakobyan, can tolerate everything when there’s no threat in political terms, but “it’s enough to feel a threat for them to immediately resort to attacking and beating.”

“I think the next report will contain a harsh assessment, tied with the authorities targeting Daniel Ionnisyan,” says Hakobyan.

In the journalist’s opinion, alongside all this, Armenia, nevertheless, has one advantage over hybrid or authoritarian countries: internet freedom, which is due not to the authorities’ goodwill, but to the inability to control the internet.

“If there hadn’t been the July assaults, then there might not have been this step back. Usually the problems are always covered up and packaged; the authorities try their best to show that everything is fine, but last year the authorities felt threatened and forgetting all that, showed their true colors,” says Hakobyan.