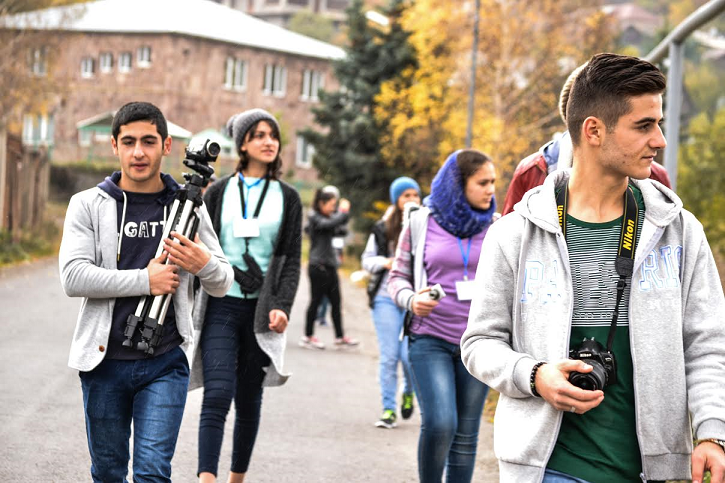 The teenagers received awards for writing the best village stories, doing a series of the best landscapes, reflecting the reality of border villages, writing the best sentimental stories and a number of other work, which were published on the website 17.am.

The Manana Center implements the program “Fostering Young People’s Freedom of Expression Through Citizen Journalism,” which aims to develop youth citizen journalism in Armenia, with funding from the EU.

“Within the scope of the program, journalism, photography, and filmmaking workshops, seminars, and media camps have been organized for the hundreds of youth in the regions (aged 14–24), who write stories, take photos, and make films on different topics,” says the center’s president, Ruzanna Baghdasaryan.

According to her, 17.am is a precious website for not only them, but also the young correspondents because “it unites everyone and provides the opportunity to have their voices heard.”

The site is a platform for self-expression also for 17-year-old reporter Vahe Stepanyan from the village of Malishka in Vayots Dzor marz (province), who was recognized as the best essayist.

He says he writes essays the best, if he doesn’t postpone his wish to write, of course. “Before becoming a student at Manana, I would keep a journal and write in it when I wanted, but now I try not to leave the task till tomorrow,” says Vahe.

He likes to write on different topics, as he says, about real and not abstract things. He writes about time the most and believes that the result is interesting. His experience forces him to think about getting into journalism in the future, though he wants to study in the information security department.

Meri Muradyan, who received an award for writing the best village stories, is one of the center’s younger students. Fourteen-year-old Meri is from Koghb village in Tavush marz, who through Manana has acquired many friends from Armenia’s various provinces. Besides the knowledge she gained, she considers her friends her greatest achievement.

The 14-year-old reporter’s stories are mainly about her village; more specifically, about the village’s past, which reached her through grandmothers and grandfathers.

Seventeen-year-old Seryozha Arakelyan, from Baghanis village in Tavush marz, received an award for reflecting the reality of and taking interesting photos of border villages.

He considers himself foremost a painter: he mainly paints portraits and gifts them to his friends and those who want them. In fact, he didn’t come to the awards ceremony empty-handed: he brought 23 portraits to give as gifts to the friends he acquired through 17.am.

Photography is his second hobby: though he doesn’t have a camera, he tries to capture his favorite shot using his phone. He likes to photograph the movement of people, daily village life, everything, but different from other photographs. “I’m from the border village of Baghanis, but that doesn’t mean that there is shooting there everyday, that the situation is tense, and that has to show up in the photos. On the contrary, I’ve photographed a furnace, heat, children studying covered in a blanket, and nothing is in their way.”

He says that with his photographs he tries to make many people recognizable — and, why not, it’s also an opportunity for him to be recognized. He gets inspired from this and begins to take photography and journalism more seriously.

His greatest achievement is also his friends, whom he communicates with through Facebook, and when they meet in person, he dreams of stopping time and prolonging the warm friendly atmosphere.

The Manana Center is the main hero of this atmosphere. The center engages in the media education of children, teens, and young adults. Operating in the center are journalism, photojournalism, cinema, and animation studios, whose students’ works have won numerous awards at prestigious international awards ceremonies and have been exhibited and published in many countries.