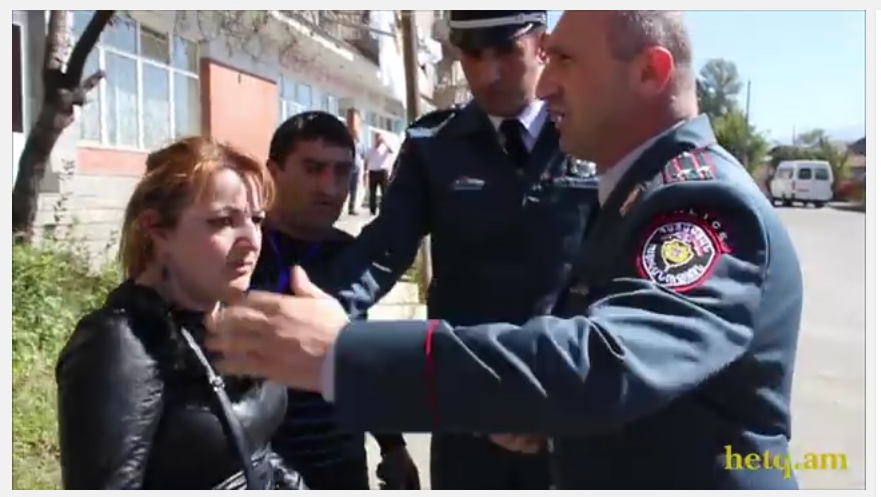 The Lori District Court of First instance handed down a fine of 700,000 AMD (about $1,370 USD) to Mariam Avagyan for impeding a journalist’s professional activities and damaging her electronic equipment on the day of the Vanadzor City Council elections.

The court has confirmed that on Oct. 2, 2016, the day of the municipal elections, at Vanadzor’s no. 30/47 polling station, Mariam Avagyan grabbed AraratNews.am journalist Shoghik Galstyan’s Samsung Galaxy J7 mobile phone and deliberately threw iton the ground, breaking it.

The court decided that the phone, as a journalistic tool for covering the election process, lost its intended purpose, and that the journalist suffered material damages.

News outlet Hetq recorded on video the act of Mariam Avagyan breaking the journalist’s phone and then saying, “It’s good that I did it.” Another person among those gathered outside the polling station was complaining that the journalist “has been filming since morning.”

The Court found Avagyan guilty of the crime stipulated by Criminal Code Article 149.1 (in part — “Hindrance to the implementation of the authorities of the election or referendum commission or initiative group, candidate or his proxy, observers, mass media representatives, the authorized person of the party [or association of parties]”), sentencing her to a fine of 700,000 dram, as well as depriving her of the right to hold a position in any state or municipal agency, or to be a member of an election commission, proxy or observer, for one year.

In court, Avagyan pleaded guilty only to causing material damages, which she subsequently compensated. She did not plead guilty to the charges under Criminal Code Article 149.1.

Shoghik Galstyan, in conversation with Media.am, said she is satisfied by the court’s decision. “Mariam Avagyan compensated me for the property damage she caused; that is to say, she gave me the same phone I had. I hope that this and similar incidents will contribute to there being, I don’t want to say entirely none, but at least fewer repeat incidents.”

“I think the punishment was proportionate, and for that reason, we won’t be appealing the ruling,” said the journalist’s attorney, Grisha Balasanyan.

AraratNews.am editor Mariam Margaryan likewise considers the court ruling legally commensurate. “I’m happy that the ruling happened at this time, ahead of the [upcoming parliamentary] elections. Hopefully, during these elections no one will obstruct the work of media representatives, and we will follow up so that the perpetrators in such cases are punished.”