“I went to the war to take pictures not to fight” 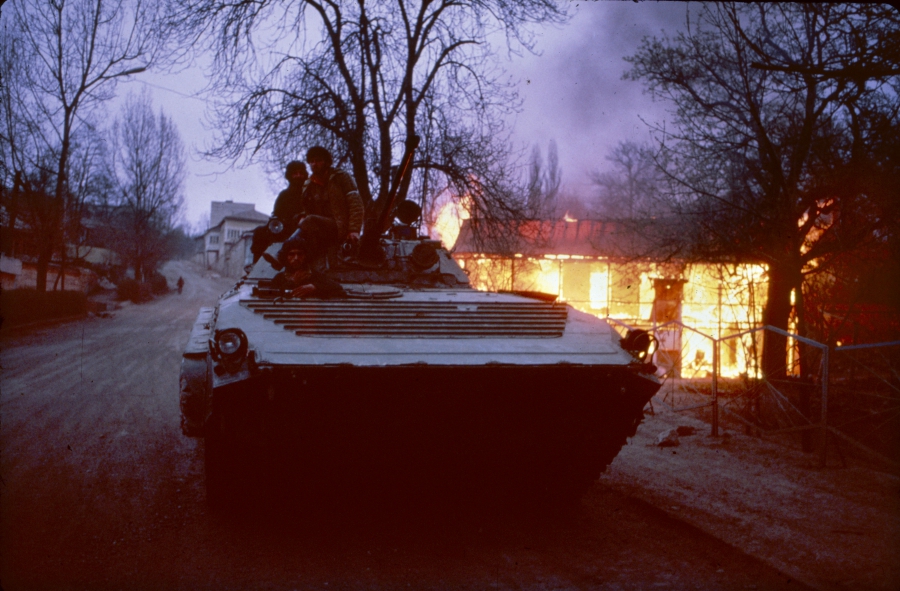 For a photographer Max Sivaslian, who documented the war in Artsakh, a war is a theater from the other side of the lens. You find yourself in the real war when you remove the eye from the camera.

“You press the camera to your face, close one eye, disappear in the lens, you don’t see what’s happening or who is around you. Even if the danger is imminent, you try to create the right dynamic. In that moment, you need to disconnect from everything to capture the right shot and to do that you first need to understand the environment. It is difficult to photograph a war, to document static shots. It’s different for videographers, they capture frame and movement, and they can do it from a single enclosed place. Of course, it’s just as dangerous but in the case of photography you cannot take pictures standing in one place,” explains the French-Armenian photographer.

Max decides to photograph the pain and cruelty of war when in 1992 in his native Marseille he sees a documentary on Artsakh war by Tsvetana Paskaleva. Max Sivaslian, who hasn’t been in Armenia before, immediately leaves for Nagorno-Karabakh, where military operations unfold.

“After the film, something has changed in my world of a photographer. I decided to participate in the war not with weapons but with my camera. My goal was to go through military operations with my camera. Prior to that, I’ve never photographed a war. Instead, I photographed poverty in Bangladesh, India, African countries, China, Central America … Human suffering and extreme poverty in remote corners of the world was my theme,” says Sivaslian.

From 1992 to 1994 by taking pictures in the frontlines, Sivaslian immortalizes military operations, preserving history for future generations.

He remembers that he was shooting film during those years. In order to have his photos published he had to get the film to France.

“I couldn’t go to Paris every time but I absolutely had to send the film. I would go to the hotel or the airport, find people flying to France and ask them to take the films with them. Back then you couldn’t develop color film in Armenia,” says Sivaslian.

For Max Sivaslian one of the golden rules of photography is to work somewhere, where other photographers haven’t been, to show something new, and not to repeat yourself.

“During those years there were very few photographers. Photojournalists would come from outside, spend only three days in Karabakh and leave. The first day they would met government officials, on the second day — the wounded in hospitals, and on the third day they would go to the frontlines. And that was it for them, while photographing the war takes time,” says Sivaslian.

He confesses that photographing a war pumps your adrenaline, and first and foremost it takes courage to be in the middle of military operations.

“You cannot do without it, just like you cannot make a soup without salt. When the situation was very bad, I wanted to be away, to run away from all of it; I was scared, I was stressed, but the most important thing is to overcome yourself. And even if you end up leaving, you come back. That’s the adrenaline that brings you back to the war,” says the photographer.

He believes that journalists, camera operators, and photographers go to conflict zones not only to photograph but also because of the same adrenaline.

“War reporters know very well that they are risking their lives just by going there; it takes courage and you never know what can happen. At the frontlines, you’re facing death and your destiny is at stake. Maybe you go to the frontlines ten times and nothing happens. But even going once puts you at risk and the inevitable will happen,” says Sivaslian.

During a combat near a village in Martakert region, Max Sivaslian received two shrapnel wounds.

“I was badly hurt in a bomb explosion; it was my lung but I didn’t know it was injured. Somebody died right next to me. I had a pain in my back but I thought I hit a stone. Within the next half an hour, I had another injury; I saw how a shrapnel went through my knee but even then I knew I would return to the battlefield,” says the photographer. He added that perhaps it wouldn’t be so dangerous had he worn a protective vest.

During the war years, when the situation was calm the boys asked Sivaslian to take their pictures but during fights, they avoided being photographed.

“Of course, I took their pictures when they asked me but not always because I only had 28 shots and I needed to spare them. During a fight, they would yell, “Don’t take photos, how many times did we tell you, take up a weapon and help us.” This happened several times. That’s the hardest thing, the photographer in you has to win no matter how many times they tell you to take up a weapon. The only time I helped was to move the weapons. I went to the war to take pictures not to fight,” says Sivaslian.

Sivaslian was back to Artsakh in the first days of April war. In his photos, he once again showed the brutal face of war, which today is already part of the history.