The Sari Tagh Lawsuits: Journalists see no sight of progress 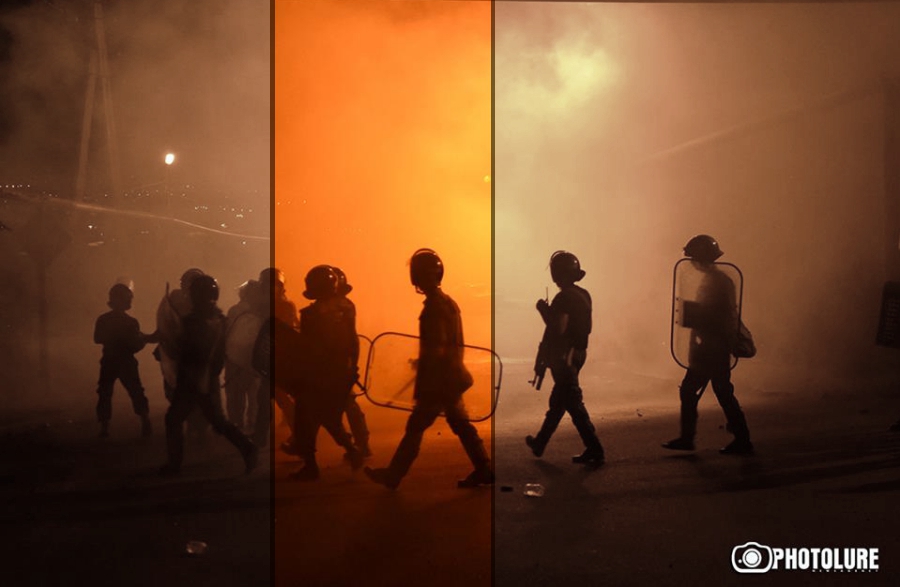 The journalists, who have experienced violent encounters on July 29th, 2016, in the Sari Tagh Neighborhood of Yerevan, have little faith that the culprits responsible will be held accountable.

Regarding The Reporter’s’ Investigation

Mariam Grigoryan, a journalist at 1in.am who was injured by explosives while covering the events at Sari Tagh neighborhood is not even aware of the stage of the criminal investigation.

In her interview with Media.am, Mariam Grigoryan told us: “I don’t particularly follow the criminal case, as I am confident that the outcome of the lawsuit will not hold ‘their own’ accountable. Everyone knows that the actions carried out on that day, including the release of explosives, were carried out under the orders of Levon Yeranosyan (the Deputy Police Chief). Instead of being immediately discharged and held liable, Levon Yeranosyan was recently given an award on behalf of the President”.

Mariam Grigoryan’s injuries have almost entirely recovered, except for some bruises on her legs.

Unlike Mariam’s wounds, Lragir.am Marut Vanyan’s injuries are still very much noticeable 6 months after the event.

“I am indifferent towards the investigation. It is simply nonsensical to expect anything. Half a year has passed since the incident. I would have also forgotten the event if it were not for the pain in my legs,” says Marut.

During the events in the Sari Tagh Neighborhood, men in civilian clothes beat the journalist with thick, wooden poles, which left him with a contusion in his right foot. His camera and passport were also stolen. Marut says that to this day he has no passport or identification documents.

A1+ correspondent Robert Ananyan also suffers from injuries as a result of the explosives used and from first-hand police brutality while capturing the events at Sari Tagh Neighborhood.

The injuries are still felt. Recently, Robert with his own two hands removed a relatively large splinter from his left leg only after which his wound begun to heal.
Robert says that his report has not yet been sent to court.

“The last time I spoke with investigators was a few months ago when my trousers were confiscated for examination to determine whether it was really my blood on them. I have not seen or heard from the investigators since,” informs us Robert.

Journalists still question whether there is even a case, moreover a lawsuit with an apparent outcome. “The police are not taking any actions to place the criminals of the Sari Tagh Neighborhood in front of a jury. It is probable that no such order have been made from “above”.”

Media lawyer Ara Ghazaryan believes that the Sari Tagh Neighborhood’s legal case is not difficult to uncover. All the events were captured on film, which makes the identification of those inflicting violence elementary.

According to the Special Investigation Service spokeswoman, Marina Ohanjanyan, the lawsuits delay at Sari Tagh Neighborhood is not intentional, but rather due to the number, and complexity, of opened cases, which investigate the violence inflicted upon journalists.

Eight lawsuits related to the violence inflicted upon journalists at Sari Tagh Neighborhood have been completed, seven of which have been sent to court.
Ara Ghazaryan says that charges are primarily related to criminal code 258th/ hooliganism, and 164 articles/obstruction of journalists’ legal professional activities, yet codes 308 and 309 articles/abuse of power and exceeding official duties are missing.

“This essentially means that all charges pertain to civilians. However, we want charges to be upheld against officials since we can prove that the individuals in civilian clothing at Sari Tagh Neighborhood were acting not only with permission from the police, but also under their direct command, and were perhaps even police officers themselves,” said Ara Ghazaryan

The events of #ElectricYerevan in 2015 and Sari Tagh Neighborhood in 2016, according to Ara Ghazaryan, speak of the discrimination and intolerance towards journalists embraced by the government, as actions were not only taken to hinder the work of journalists, but to also “punish” those who were covering the event or leaving the scene.

Thus, for all these atrocities, merely limiting the punishment to a penalty, in Ara Ghazaryan verdict, is inadequate.

Ashot Melikyan, the Director of the Committee to Protect Freedom of Expression likewise believes that the steps taken by the government do not mirror the scope of violence and atrocities that occurred at Khorenatsi Street and Sari Tagh Neighborhood.

“We represent the interests of a few journalists whose legal cases are also processed at a very slow pace, if this continues, we will not exclude the option of preparing documentation with the intention of presenting them to an international organization,” Melikyan told us.

The Committee Director has the intention to present the cases to the European Court of Human Rights and the UN Human Rights Committee.

Is it easy for journalists to defend their rights in Armenia?

“Or when Mher Sedrakyan, cursed and threatened a journalist yet continued to hold his position as a deputy. Journalists too quickly forgot the incident, continued by asking questions, which allowed him to display the same behavior again. If those in the field of journalism were at a bit more united, I believe that journalists would face fewer obstacles, and the authorities would become more vigilant and cautious,” said Mariam Grigoryan.

Robert Ananyan, on the other hand, is of the opinion that the laws are imperfect, especially with regard to violence against journalists.

“Criminals remain unpunished. We have the impression that the judicial system is instructed not to punish or uphold any legal action related to cases that involve obstructions of journalists’ professional rights and violence against journalists. Freedom of speech is thus suppressed through inaction,” says Robert Ananyan.
Marut Vanyan, on the other hand, finds it meaningless to talk about human rights entirely. “The only place a person can feel dignified in Armenia is in a cafe where at least he/she will be met with a smile,” says Marut.