The New Year 60 Years Ago in Radio and on Television 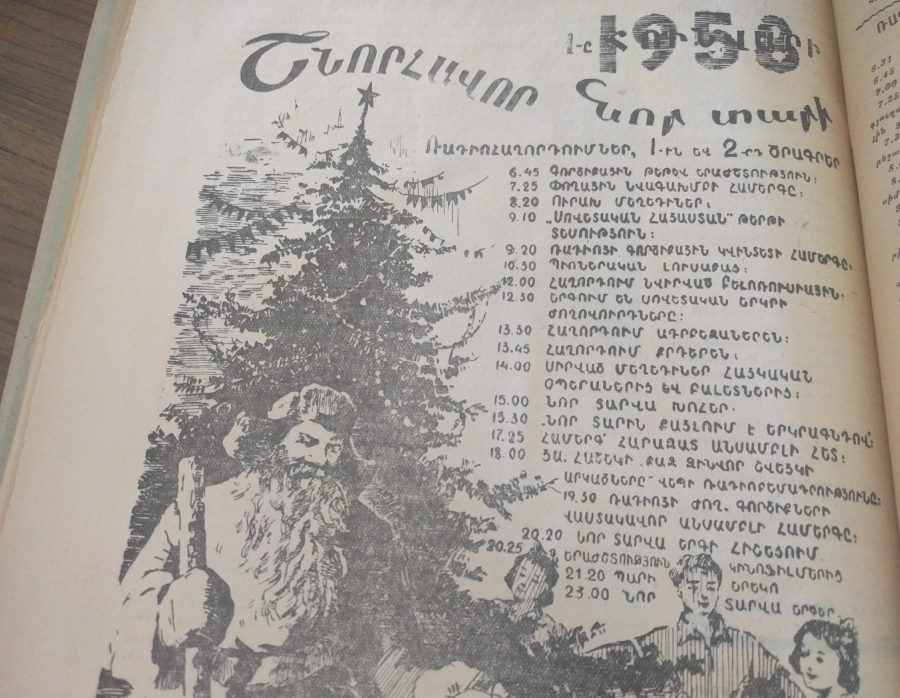 When the first television production with Armenian content was aired in late 1956, it dramatically changed the communication area. People started to follow and discuss the reality reflected in television.

Television became a product that could be sold not only as a device (“box”), but also as a model of life propagated. In Soviet Armenia the Soviet model was propagated, which also included the magic of new media, generating great interest.

And already by the next year, 1957, radio and television broadcasts’ program-brochures were published, which not only presented the start hours of programs and films, but also briefly described them.

Naturally, “translators” from Moscow had a large space in the programs. Same with films, photos, and programs about Lenin. Under this photo, for example, there is a note: “V. I. Lenin in front of the microphone of the Gramophone Department of the Central Propaganda Press pronouncing a speech (1919).”

But the programs connected to the New Year, of course, had a festive-childlike happy format. For example, New Year ceremonies in kindergartens were broadcasted. The program’s daily report said: “We will move our mobile television station to the kindergarten and show the entire Christmas tree ceremony for you all. There are so many children there… All of them are intelligent and gifted. They have learned new rhymes, they know how to sing and dance well. Other than Santa Claus and Snowy there will be other guests and they… Let’s say it is better not to explain, you will all see.”

Of course, the old programs and generally anything old plunges into nostalgic overtones, and oftentimes to be freed of nostalgia a good method is to remember, that rules of the game may not change even in that case when the social order is changing. For example, speeches of leaders are again posted in the news.

Television has always established perceptions about life. 60 years ago the model of life was different (two-faced, arrogant and holiday-oriented), and now it is more fragmented (divided, arrogant, and fun-oriented).