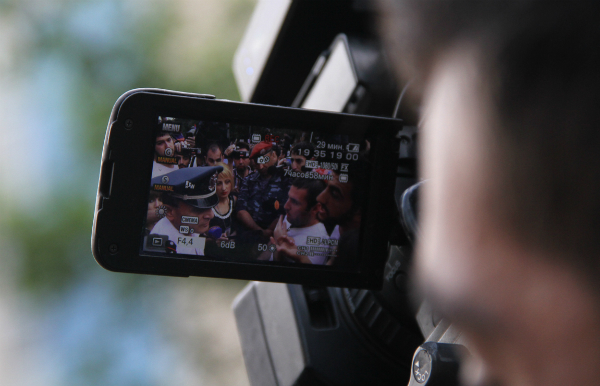 The trial of four police officers — Tachat Noratunkyan, Artur Ayvazyan, Kostan Budaghyan, and Davit Perikhanyan — accused of obstructing journalists’ professional activities by abusing their official position is set for September 24 at the Court of General Jurisdiction of Kentron and Nork-Marash Administrative Districts of Yerevan. One of the officers (Perikhanyan) is also accused of willful destruction of property. The men were asked to sign guarantees that they would appear in court.

The incidents in question occurred on the night of June 23, 2015, in Yerevan, during police operations to disperse the ongoing demonstrations against electricity price hikes (a.k.a. “Electric Yerevan”).

During the disputed incident, David Perikhanyan  was the head of the missile and artillery armament service of the Armenian police forces’ N military unit, Lieutenant Colonel Kostan Budaghyan was the senior inspector of the patrol service of the Armenian police’s Yerevan division, and Captain Tachat Noratunkyan and Artur Ayvazyan were new recruits. The investigator for special cases of the Armenian Special Investigation Service (SIS), upon the prosecutor’s approval, decided to temporarily suspend these officers from their jobs.

For hindering the legal professional activities of journalists by abusing one’s official position, Armenia’s Criminal Code prescribes a fine of 400 to 700 thousand AMD [approximately $845 – $1,478 USD] or imprisonment up to 3 years [Article 164.2].

As for willfully damaging another’s property, the Code prescribes a fine of 50 to 100 thousand AMD [$105 – $210] or up to two months’ detention or up to two years’ imprisonment [Article 185.1]. According to the preliminary case materials, Perikhanyan damaged the Canon digital camera in Boyajyan’s possession (a property damage of 485,000 AMD [$1,024]) and the Samsung Galaxy smartphone in Papyan’s possession (in both cases, the device belonged to their employers).

Azatutyun online journalist Artur Papyan informed Media.am that the police later returned the broken smartphone and gave him a similar new phone as compensation. Asked what amount of accountability would he consider commensurate to what happened to him, Papyan said, “I don’t want to make assessments because it’s not my place to say; in any case, for that there are the courts, the Criminal Code; let those authorized to do so decide.”

Did investigative activities with him pick up about a year later only after Armenian President Serzh Sargsyan’s apology for the attacks against journalists in Yerevan’s Sari Tagh? According to Papyan, he has been regularly invited to participate in investigations both before and after the events at Sari Tagh. Actions to recognize Perikhanyan, in any case, happened after these incidents.

Recognized as the injured party in the attacks during the Electric Yerevan demonstrations, the obstruction of journalists’ professional activities and damage to property, journalist Hakob Karapetyan and one other journalist are preparing to dispute the offenses they endured at the European Court of Human Rights (ECtHR); and another journalist, at the UN court. “We began this process at the end of last year, but because of some technical inaccuracies, the application wasn’t accepted. At this point, we’re preparing to apply for the second time. I hope this will set a preventative precedent, and those attacking journalists or obstructing their work will be penalized appropriately, whether they’re police officers or not.”

Karapetyan told Media.am that on the night of June 23, 2015, when he was recording the attacks against Electric Yerevan participants and journalists, at Freedom Square deputy police chief Hunan Poghosyan ordered the removal of his camera’s memory card and returned the camera to him. He managed to put the memory chip in his pocket, but the police noticed and took it. “They returned the camera, and I left… The same evening, when on the closed-off boulevard I asked when will you return journalists’ property and my memory chip in particular, Hunan Poghosyan said, no one took your chip, you are mistaken.”

Karapetyan says during the investigation, police asked him to come to the station and suggested off-the-record that they would return his memory chip in exchange for dropping the court proceedings. “Naturally, I refused this option. The two to three thousand [dram] chip, of course, is secondary because I’m sure the information it contained will be erased, as happened in the case of other journalists.”

In the stories of journalists affected by similar situations at different times, we always overlook one very important detail: the value of the material (the visual or audio evidence) journalists recorded.

In all these cases, it’s obvious that the journalist’s lawful professional activities are obstructed for one reason: to seize and eliminate the recorded information. In this case, the perpetrator’s aim is not so much the journalist as what they recorded. And the value of the material at that moment must be extremely high also for the journalist and their media outlet (from both a professional and business standpoint). Moreover, this material may be invaluable for the entire society.

But the Criminal Code of the Republic of Armenia doesn’t specify this aspect in neither the article on “Hindrance to the legal professional activities of a journalist” (Article 164) nor the article on “Willful destruction or spoilage of property” (Article 185). Meanwhile, experience shows that a journalist’s legal professional activities were obstructed in Armenia most often not by beating the journalist but by seizing or damaging the item that stored information they had recorded. Perhaps the time has come for the Criminal Code not to equate the damage of any property with destroying information recorded by journalists?