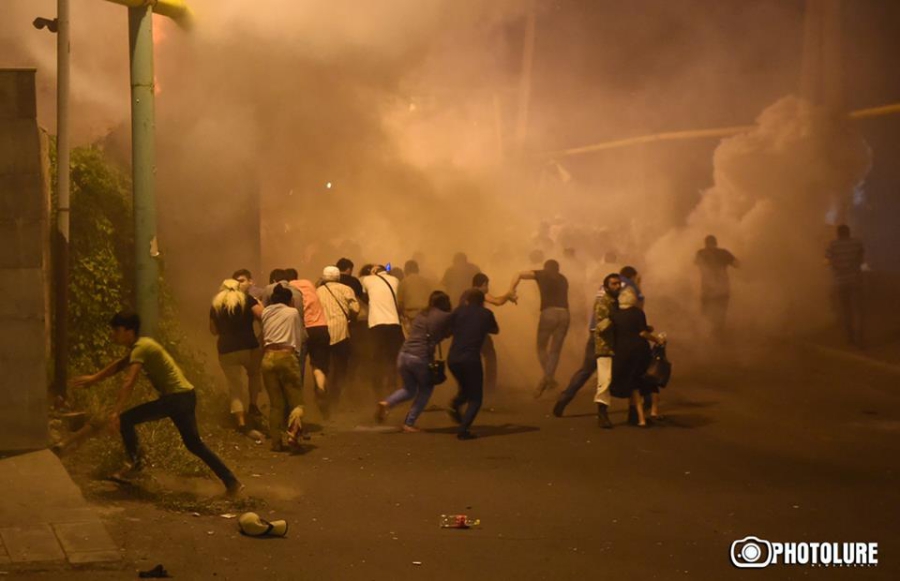 At around 11 pm on July 29, journalists were attacked while reporting on the dispersal of demonstrators in Yerevan’s Sari Tagh district.

Particularly affected were Azatutyun (RFE/RL’s Armenian service) journalists Karlen Aslanyan and Hovhannes Movsisyan, and camera operator Garik Harutyunyan, all of whom were working on the scene.

On Azatutyun radio’s airwaves, Movsisyan said that those who attacked them knew very well they were journalists: the crew was in the middle of a live broadcast, and all three members of the group wore press badges.

Director of RFE/RL’s Armenian Broadcast Service Hrair Tamrazian, in a status update on Facebook [AM], said that hitting journalists were plainclothes police officers.

“Our journalists Karlen Aslanyan and Hovhannes Movsisyan were attacked. They had press badges and journalistic devices. Both were subjected to violence, received blows from batons by plainclothes police officers. They told Hovhannes, ‘Are you filming, yeah?’ They approached and began to attack, smashed [their] equipment. It’s terrible. As told by Hovhannes and Karlen, the officers tore off the press badges. The demonstrators were also beaten. It’s just horrible.”

Another journalist documenting police actions in Sari Tagh, Gevorg Ghazaryan, tweeted that he was beaten and his camera was brutally taken.

They #police brutally took my cameras & beat me

Police have promised [AM] to immediately investigate “all incidents tied to representatives of the media,” determine the circumstances, and “further inform.”

The protest at Sari Tagh, during which journalists were attacked, was carried out by supporters of a group representing Sasna Tsrer [the “Daredevils of Sassoun”] who seized the Police Patrol Regiment building in Yerevan on July 17.

During this domestic political crisis, there have been other incidents when journalists were beaten. In particular, on July 18, a police officer hit Azatutyun journalist Artak Hambardzumyan, while a group of citizens hit Iravaban.net journalist Gevorg Tosunyan, who was covering the demonstration, and seized his camera’s memory card.

Dear colleagues, you can send your stories of experiencing violence and being detained to [email protected]