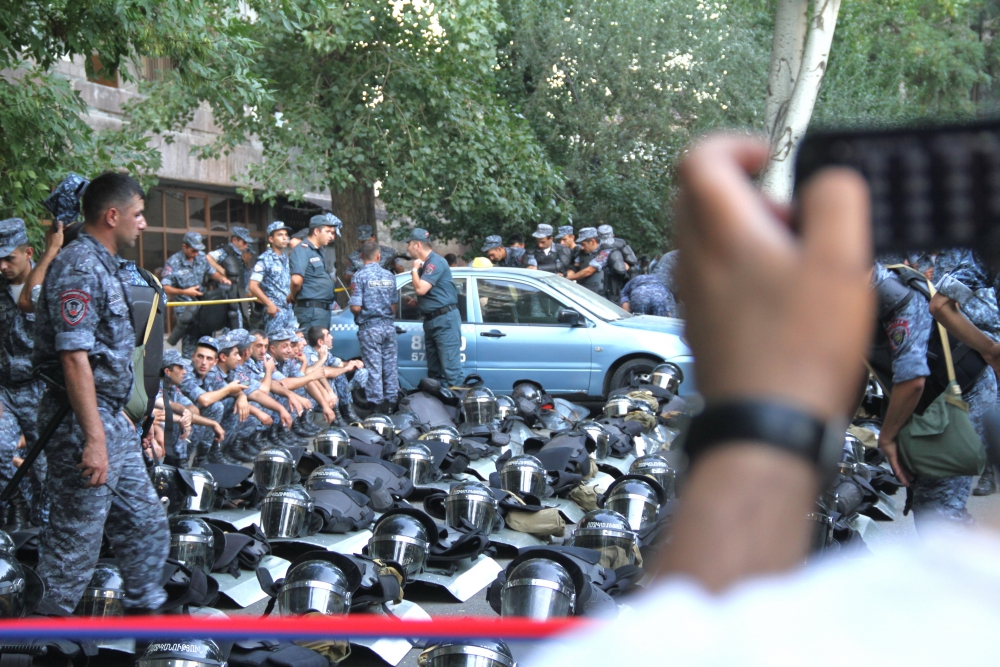 Has there been the precedent of this in the world? On July 23, journalists are taken in police cars to Yerevan’s Police Patrol Regiment building, which is under the control of the armed group that seized it. Without bulletproof vests or helmets, the journalists speak with the armed men. The press conference [AM] is a condition for the release of the police officers held hostage inside, which is done. Some time later, shots are heard, although fired in the air. The press conference is interrupted. It’s an extraordinary incident: to turn journalists into an object of negotiations and endanger their life — who is responsible for this?

The conversations with Armenia’s National Commission on Television and Radio member Harutyun Harutyunyan and Yerevan-based Committee to Protect Freedom of Expression President Ashot Meliqyan on the media issues that emerged after July 17 — let’s begin from the opinions on this “not confidential” press conference.

Harutyun Harutyunyan: They didn’t respect themselves. If I was a journalist, I would demand that they come to the meeting with me without weapons. Their safety, yes, wasn’t guaranteed, but who should’ve guaranteed it, I don’t know. I understand that in Armenia everything is on autopilot [mode]; a dog doesn’t recognize its master. The authorities are unable to even give a clear legal assessment to what’s happened: on the first day, they say, “terrorists”; on the second day, they say, “armed group”; the third day, I don’t know what. What does it mean, an armed group? In what way do these people differ from Nairi Hunanyan [the leader of a terrorist group that stormed Armenia’s National Assembly in 1999 — Ed.]?

Ashot Meliqyan:  Yes, the journalists’ safety wasn’t guaranteed at that press conference. A great many things aren’t regulated here [in Armenia]. But no media, of course, can abstain in such important matters of public concern, and any such opportunity must be used. In this sense, they acted quite rightly, but it should’ve been organized properly. If that really was a terrorist act, they could also have taken the journalists hostage. But they didn’t do that. That is, here too it appears that the group members’ main goal was to inform the public about their demands first-hand, and they reached that goal… You’re right, but not only journalists’, but also everyone’s life is of high value, and I am simply proud of my colleagues. They could very easily have been afraid of that danger and not go, not do their work — even if they went coerced by their supervisor.

Harutyun Harutyunyan: Live broadcast of these types of incidents is very wrong. Because, whether you like it or not, whether these boys are good guys or bad guys, whether they’re right or wrong guys, what they did is legally terror. Why there’s so much support for terrorists, I don’t want to get into this in this conversation, but every media outlet must understand that in such cases you shouldn’t provide live broadcasting because you have no possibility of removing from the airwaves calls for violence or encouraging violence, first of all; second of all, you don’t know what’s going to happen at that moment. Please, film it all, take it to the newsroom, edit, prepare your reportage within the scope of professionalism and ethics, broadcast, whether online or on television.

Ashot Meliqyan: It’s a well-known axiom that media outlets shouldn’t be provided to terrorists. But the government, the authorities, by making those concessions, once again, in my opinion, stressed that this is not a terrorist act, and they’re not terrorists. But that doesn’t mean that I’m justifying those actions. As we saw, the criminal case too was launched on the charge of not terrorism, but of occupying buildings and structures. That is to say, if they’re not terrorists, then spreading their opinion through media outlets is justified.

Harutyun Harutyunyan: During the October 27, 1999 terrorism, there was no Islamic State in the world yet, and the internet wasn’t as common, but it was already common practice not to provide airtime to terrorists. A1+, you’re right, provided airtime to Nairi Hunanyan, but I was caged that supposedly I promised to provide him live streaming though national television. Hunanyan’s wish was live streaming, but why did we have to provide it? Our director working in the mobile studio was sending what happened during that time in the National Assembly by switching from camera to camera. Some segments from those scenes we showed from the first broadcast of the news: a very small segment, which CNN took from the air and which became an ordeal hanging over our heads. At the prosecutor’s office I was being convinced that supposedly I sold those images to CNN. They didn’t understand that much, how that happened technically.

I too am of the same opinion now that we acted correctly by not paying heed to the terrorists’ demand for live streaming. Moreover, there’s that piece in the criminal case when Nairi Hunanyan had come out live on air on A1+, I told Tigran [Naghdalian, previously the Executive Director of Armenian National Television], let me go, let me turn off A1+’s transmitter. Tigran said, it’s none of your business, that’s not our problem. I was convinced that terrorists shouldn’t be provided with airtime — and live at that. Because everything can be on live broadcasts, every type of appeal.

Harutyun Harutyunyan: Let’s not talk about the TV stations. We in our family boycotted it long ago because it no longer gives me anything. For example, yesterday morning, as per my former habit, I suddenly turn on the TV and come across the news. It doesn’t matter which channel’s [news] because all the channels’ news are the same. And in the morning I hear news about something that happened in the evening the day before yesterday. It’s an atrocious thing in our sector. Everything is put on autopilot: and be damned — whatever will happen, let it happen.

Ashot Meliqyan: TV stations during this time act as a platform for the National Security Service (NSS) and police. They very carefully listened and complied with the NSS’s call that only official information must be used. I, of course, wasn’t surprised when I heard that call because the NSS does its job, but media outlets are not at all obliged to heed that call. A state of emergency hasn’t been declared, and media outlets were obliged to use official sources and search for and find their own sources, thoroughly check the collected facts, compare opinions. All this was absent, and it becomes more apparent in extreme conditions that the TV stations are under the severe control of the authorities.

Ashot Meliqyan: It would be very good to conduct high-quality monitoring during this time, of course. Both media organizations and media outlets must be ready for work in extreme conditions, but for some reason it doesn’t work out.

Harutyun Harutyunyan: During this entire time, one article left an impression on me: Anna Israyelyan’s “Déjà vu” [AM], beneath each line of which I would sign my name. Perhaps some people didn’t like it, it’s understandable, but that article was the most impartial, facts-based best journalistic work during this time.