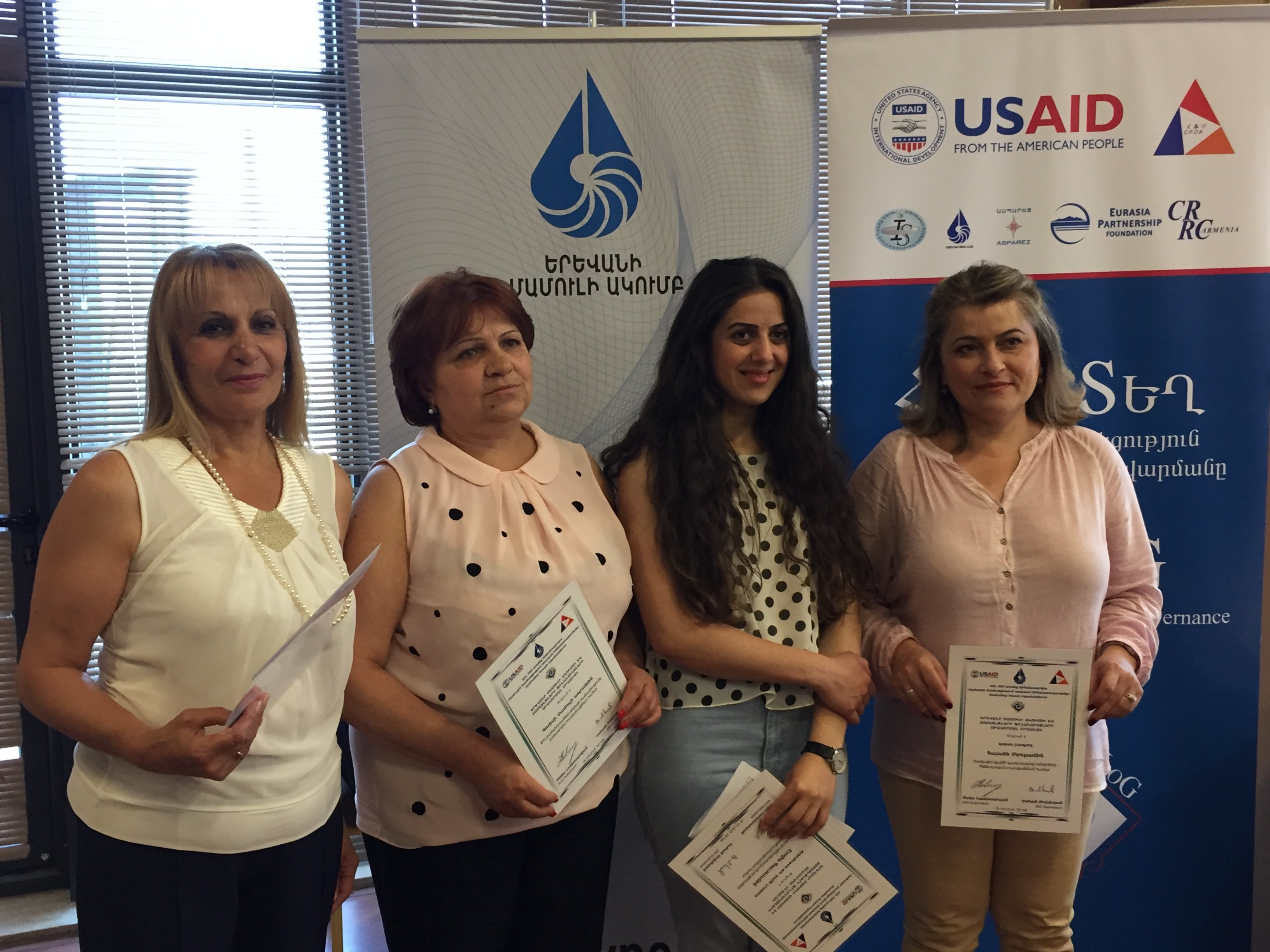 There were more Yerevan Press Club (YPC) awards this year than usual. Along with the annual awards, the YPC also established awards within the scope of the Civic Engagement in Local Governance (CELoG) program, which is implemented with the support of USAID and in cooperation with the Communities Finance Officers Association.

“It’s always seemed to us all that everything begins from Yerevan; these past 20 years we’ve tried to prove the opposite. There can’t be a rich, established country without strong communities,” said Movsisyan.

Kotayq newspaper reporter Agnesa Hovakimyan, who has been working in journalism for 38 years, received an award for her long and dedicated work in the regional press. The award was given by YPC Programs Manager Haykak Arshamyan.

“Each prize, every award certificate gives room for retrospective reflection. You think, you didn’t work, devote [yourself] to this difficult profession in vain,” said Hovakimyan.

“The regions are topics that are usually unliked and don’t really capture the attention of journalists. We like everything, beginning from state agencies, NGOs or media outlets, to be centralized in the capital and at best, fail to notice what’s happening in the regions. But there are devotees, and we’re very pleased that they seem to be increasing,” said Grigoryan.

“Our country is terribly centralized, with budgets, numbers, method of governance. This is seen in everything. There’s a lot to do in the regions. Very few are those journalists who are deeply engaged in these issues. We would like more journalists to report in greater depth, and the quality of local self-governance would improve because of it,” said Barseghyan.

Receiving annual YPC awards were journalist Armen Manukyan for the consistent popularization of jazz in Armenia and abroad; Lragir.am journalist Tehmine Yenoqyan, for the documentary films The Chronicle of Achievement of Rights and Familial Mediterranean Fever; and 168 Zham newspaper economic analyst Babken Tunyan, for consistent and quality coverage of economic issues.

Photographer and camera operator Hakob Poghosyan received an award in photojournalist Ruben Mangasaryan’s name for his devoted and consistent photo documentation of the Karabakh War.

Photographer Zaven Khachikyan was given an award named after Valeriy Aydinyan for his photo series dedicated to Pope Francis’s visit to Armenia.

The Yerevan Press Club awards have been granted since 1998.