Aurora Prize for a Journalist with Integrity 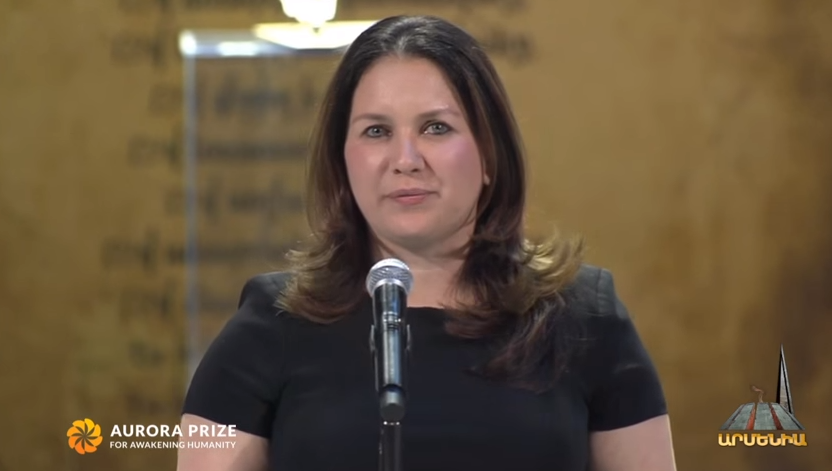 On April 24, the 101st anniversary of the Armenian Genocide, the inaugural Aurora Prize (an idea by the 100 LIVES initiative) was awarded in a ceremony in Yerevan.

The Aurora Prize was founded as a token of gratitude. A hundred years ago, various individuals and humanitarian organizations, risking their lives, saved thousands of Armenians from the massacres. Many do the same job today, with dedication and admiration saving, supporting, and inspiring people in brutal circumstances in different corners of the world.

Marguerite Barankitse, who saved the lives of thousands of children during the Burundi Civil War, became an Aurora Prize laureate. She received a large monetary reward as well as the opportunity to continue the cycle of giving: she will transfer $1 million USD to those humanitarian organizations that need it.

The 100 LIVES initiative also established the Integrity in Journalism Award, bestowed to journalists for their exceptional contribution to exposing crimes against humanity.

The Integrity in Journalism Award values journalism transmitted from heated and humanitarian crisis situations. When in the task of covering the plight of people in peril, it’s necessary to demonstrate exceptional courage and tenacity.

100 LIVES bestows this award in partnership with the International Center for Journalists (ICFJ).

The first award-winner became The New York Times foreign correspondent, Pulitzer Prize–winner Rukmini Callimachi of Romanian descent, who exposed numerous cases of trafficking (child labor in gold mines in Senegal and the link with banks in Switzerland, sex slavery by ISIS, the massacres by rebels in Mali and the Ivory Coast).

ICFJ President Joyce Barnathan, delivering the award in Yerevan, said that journalists involved in various investigative journalistic projects prove every day that good journalism makes life better — it illuminates the darkness, gives voice to the voiceless, and inspires others to work in the name of philanthropy and the saving of human lives.

“Rukmini Callimachi’s work  provides hope that the victims will be heard and protected,” she said.

On stage, Rukmini Callimachi said: “As a journalist, I don’t think that you ever make a concerted decision to put yourself at risk; you are doing your job.”

“In my opinion, journalism is the frontline that protects against barbarianism. Journalists are often the first to appear at the site of atrocities. Of course, our stories don’t always completely depict the atrocities, but they can help rouse the world’s consciousness and with that, reduce the number of crimes.”

In the words of100 LIVES and Aurora Prize co-founder Ruben Vardanyan, “Journalism is one of the strongest tools to illuminate and alleviate human suffering.”