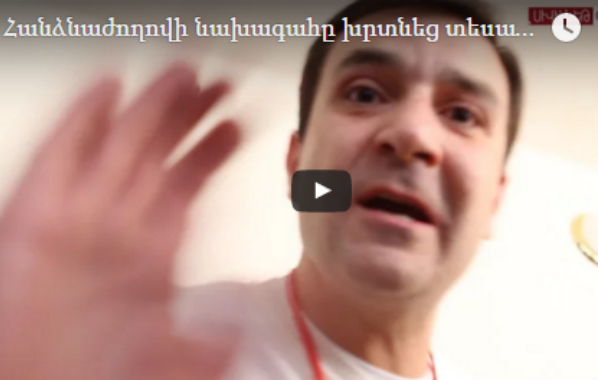 Media organizations in Armenia have condemned the physical violence against journalists and the obstruction of their professional activities that took place on Dec. 6, the day of the referendum on constitutional changes.

The Committee to Protect Freedom of Expression, Yerevan Press Club, Media Initiatives Center [responsible for this site], Asparez Journalists’ Club, Public Journalism Club, Freedom of Information Center of Armenia, Media Diversity Institute–Armenia, Journalists for Future, Journalists for Human Rights, and Goris Press Club on Monday issued a statement [AM], expressing indignation on the registered instances of violence and hindrance of the work of journalists.

“Sadly, everything that has happened several times in Armenia was repeated: attacks and pressure on journalists increase during elections and referendums because they might [interfere with the plans of those who’ll stop at nothing to achieve their goal] and ensure ‘victory’ on account of electoral bribes, fraud, and abuse. As always, the services of neighborhood ‘thugs’ were widely used for this purpose,” reads the statement, in part.

“This is already a bitter reality and tradition in Armenia, when involved in these political developments are neighborhood thugs and other individuals for whom it seems there are no barriers in life; when they see the lively activities of journalists, proxies, or observers that might interfere with their plans, they restort to those inadmissible measures. I think this will end only when these sort of people begin to be punished,” says Yerevan Press Club President Boris Navasardian.

Media organizations are asking the police and investigative body to carry out a thorough and impartial investigation regarding the evidence, excluding imitative approaches; they are asking the prosecution to demonstrate proper control over the actions of law enforcement bodies, and act consistently to identify and hold accountable those who violated the rights of journalists and media outlets; and the ruling political party that initiated the referendum, to give explanations to the public on the violence against journalists and the obstruction of their work.