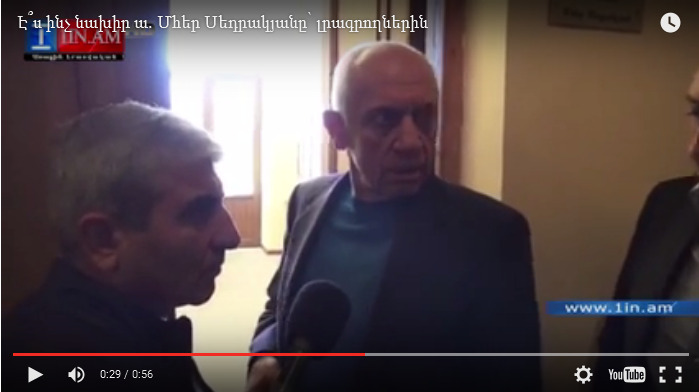 Ten media organizations have issued a statement [AM] on an incident on February 19 involving Republican Party of Armenia (HHK) MP Mher Sedrakyan.

The organizations are asking the HHK parliamentary faction as well as the president of the National Assembly to “publicly condemn  this MP’s conduct, apologize to all the journalists accredited in the parliament who have been offended, and guarantee that such incidents will not happen again.”

The media organizations that penned the statement at the same time are asking the HHK leadership to discuss the issue of their colleague and hold him accountable, urging him to voluntarily relinquish his parliamentary mandate.

Head of the National Assembly’s public relations and media department Arsen Babayan told Media.am that parliamentary chair Galust Sahakyan will respond to the statement when he returns to work. As previously reported, due to health reasons, Sahakyan was moved to hospital.

Head of HHK parliamentary faction Vahram Baghdasaryan told Media.am over the phone that he has called Sedrakyan to his office ahead of the start of tomorrow’s parliamentary session, to ascertain the circumstances surrounding the February 19 incident with reporters.

Until then, he said: “We always condemn such actions and urge both journalists and MPs to refrain from such behavior.”

Reminded that this incident [video, AM] is specifically about an MP, and the media organizations’ demand is quite clear, Baghdasaryan replied that he will respond only after he speaks with Sedrakyan.

Several parliament-accredited journalists testify that on February 19, Sedrakyan, seeing them in the parliament corridor, said, “What herd is this?” He then invited the journalist he upset with his insult to a “private conversation” and divided journalists into those who are “normal” and those who are “abnormal”. And not only: heard in the 30th second of this 1in.am video [AM] is how this same MP utters gross profanities in the presence of journalists.

The National Assembly’s rules of procedure require MPs to respect public moral norms and show respect to those with whom they interact while performing their parliamentary duties.

The 10 media organizations in Armenia that issued the February 22 statement conclude:

“If these demands of ours are not met, we will have grounds to conclude that for the Republican Party [of Armenia] and various government bodies, the behavior of Mher Sedrakyan and others like him is the norm. And since Armenia’s ruling authorities are unable or don’t want to protect journalists from diverse threats, intimidation, and harassment, we will be forced to rely on the international community, urging [it] to impose individual sanctions, as it is done toward those who regularly and openly violate the law, not being held responsible in their own countries.”