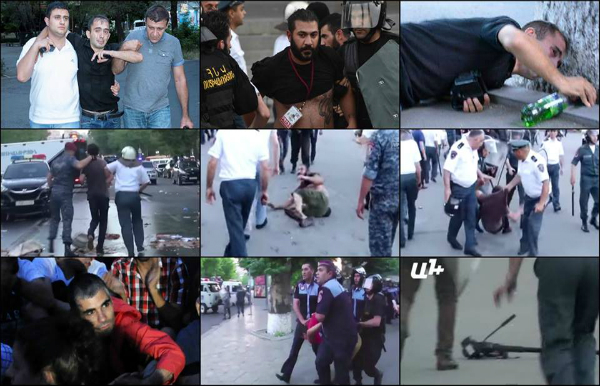 Armenian and international media organizations condemn the attacks on journalists that occurred the morning of June 23 while dispersing participants of a sit-in protesting the electricity price hike on Yerevan’s Baghramyan Avenue.

The Yerevan-based Committee to Protect Freedom of Expression, Yerevan Press Club, Media Initiatives Center [responsible for this site], Asparez Journalists’ Club, Media Diversity Institute-Armenia,  Journalists for the Future, and Journalists for Human Rights in a joint statement [AM] state that journalists while carrying out their lawful professional duties suffered from the disproportionate and unlawful actions of law enforcement officers.

“Police officers not only didn’t create favorable conditions for the work of journalists, which they are obliged to do, but also while carrying out the orders of some senior law enforcement officials with a medieval mindset, brutally hindering the work of journalists, in the 21st century ineffectively tried to conceal from the Armenian and international public the atrocities they committed against peaceful demonstrators,” reads the statement.

The organizations demand to launch an internal investigation to hold accountable the police officials who allowed illegalities and abuse during police actions on Baghramyan Avenue and to pay damages to journalists whose devices were damaged or broken.

Reporters Without Borders in its statement noted that journalists were a target of violence on June 23.

“We are shocked by the use of such disproportionate force against journalists who were just doing their work. This targeted violence was clearly designed to prevent media coverage of the use of force to disperse the sit-in. We urged the authorities to punish this violation of freedom of information so that it does not recur,” said Johann Bihr, the head of the Reporters Without Borders Eastern Europe and Central Asia desk.

OSCE Representative on Freedom of the Media Dunja Mijatović, in turn, stated that journalists’ safety must be ensured at all times.

“Media has the right to cover public events and journalists must be able to report in a free and safe manner, without fear of harassment and intimidation,” she said.

Mijatović urged the authorities to immediately investigate the incidents and take steps to ensure restraint by law enforcers toward members of the media.

The Broadcasting Board of Governors (BBG), of which RFE/RL’s Armenian Service (Azatutyun) is a part, in its statement likewise condemned the violence against journalists.

“Our colleagues were doing their job, reporting for the benefit of the Armenian public. We condemn such interference,” said RFE/RL Editor in Chief Nenad Pejic.

Police Chief of the Republic of Armenia Vladimir Gasparyan in an interview with GALA TV said that the police will compensate journalists for any incurred damages.

“There are some flaws that I noticed in their work, especially connected to representatives of news outlets. I ask for forgiveness. We’ve assigned an internal investigation; we’ll settle it. I know that technical equipment was broken; the police will restore the material damages incurred by journalists,” he said.

Some of the detained journalists were subject to violence.