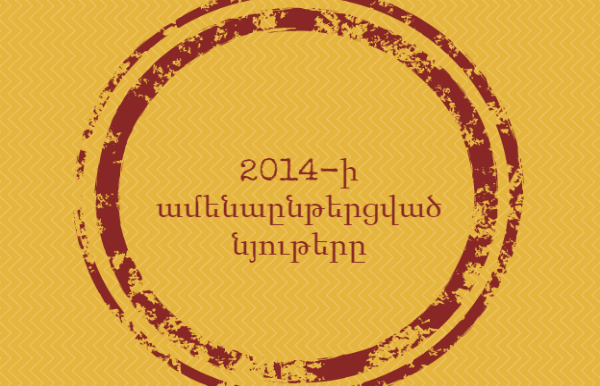 2014 was a year full of events in Armenia. The agreement for Armenia’s accession to the Eurasian Economic Union was signed, the situation along the Armenia-Azerbaijan Line of Contact grew tense in the summer, and at the end of the year the most discussed topic became the decline of the Armenian dram.

What was Armenian media coverage like? We present the top 5 most read articles (in Armenian) on Tert.am, Hetq.am, 1in.am, News.am, and CivilNet.am, which our colleagues provided.

The resulting picture mostly reflects the political and social issues that interest the public. According to these news providers’ top 5 stories of 2014, the most read articles were news of the death of Armenian actress Hasmik Gharibyan and the Armenian-Azerbaijani conflict.

1. Civilnet’s Live Stream
2. ‘Morality’ according to the Romanian Ambassador
3. The Child Who Sanctified Doctors [AM]
4. Sensors to Protect Frontlines
5. Chinari: Opponent Fires in All Directions [AM]

The choice of news outlets was made by Media.am, taking into account the impact, audience, and content of the sites. We thank our colleagues for providing the list of their most read articles.