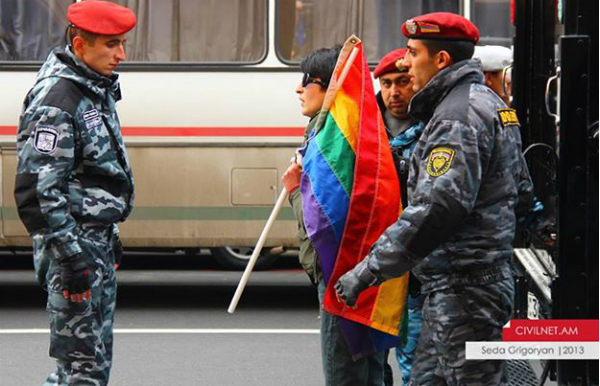 After the lawsuit against local newspaper Iravunq for defamation and hate speech was recently denied, the issue of language in LGBT coverage in the Armenian media has become urgent.

The court rejected the civil suit of 16 citizens, who sued the paper for an article [AM] published on its website on May 17, 2014, with the headline: “They serve the interests of the international homosexual lobby: Black list of enemies of the state and nation” [the term used for “homosexual” was derogatory, akin to “faggot” in English].

The article listed the names of 60 people, with hyperlinks to their Facebook profiles and urged its readers to show “zero tolerance” toward them, terminating all contact, not hiring them, and removing them from civil service.

The court not only rejected the lawsuit, but also obliged the plaintiffs to pay the defendant 150,000 AMD (a little over $360 USD) as compensation for legal expenses.

One of the plaintiffs, Mamikon Hovsepyan, says that a significant number of Armenian news outlets generally has a homophobic disposition when covering LGBT topics.

“The terms used in articles are discriminatory and offensive, with the suffix ‘mol’ [which is derogatory in Armenian]. In articles containing libel and aggression by news outlets that consider themselves upholders of the nation, homosexuality is labelled as a deviation, a perversion, blasphemous, and a treacherous act. Few are news outlets that present the topic neutrally — without positive or negative tones,” he says.

Public Information and Need of Knowledge (PINK Armenia) NGO, of which Mamikon Hovsepyan is the president, regularly monitors LGBT coverage in the Armenian media. Hovsepyan says LGBT topics are mainly covered with the goal of obtaining high ratings and readership.

MediaLab.am is one of the few news outlets in Armenia that regularly reports on the life and issues of the LGBT community in Armenia. MediaLab.am editor Marianna Grigoryan says the majority of news outlets avoid talking about LGBT issues.

“News outlets don’t cover LGBT topics because it leads to a deluge of offensive comments and threats, and the news outlet and the journalist become ‘traitors’. Covering the topic are mainly the yellow press, by publishing negative news akin to gossip, which result in a fervent response, comments, and ‘likes’. They publish those pieces specifically for that purpose,” she says.

According to Grigoryan, the topic is seldom represented from the human rights perspective: Members of the LGBT community, as a rule, are represented as “perverse monsters”, while the language of the articles is discriminatory and offensive.

“There are quite firm stereotypes, which news outlets must try to break, but they don’t because they also ascribe to that stereotypical thinking. LGBT topics must be reported like any other topic,” says Grigoryan.

According to Yuri Manvelyan, one of the editors of Epress.am, another local news outlet that regularly includes LGBT coverage, “When journalists from supposedly journalistic positions try to attack people, not having the facts, they begin to assume the inexplicable position not of a journalist but of the savior of the nation or Armenian family.”

“The LGBT community really from every perspective is in a vulnerable situation — [one] can go completely unpunished, insulting and using violence, and even earn the sympathy of the police. We must just use professional journalistic sensitivity toward these people, who are vulnerable because, unlike, for example, the ruling authorities, the LGBT community doesn’t have leverage to influence the press,” says Manvelyan.

According to him, if a journalist does not aim to offend, he can contact organizations working in LGBT rights and find out the correct terms that are inoffensive.

“We journalists not only use, but also create language. That’s why we have to be very careful when choosing words,” says Manvelyan.