Why Police were Oblivious to Journalists’ Work Being Hindered: Opinions 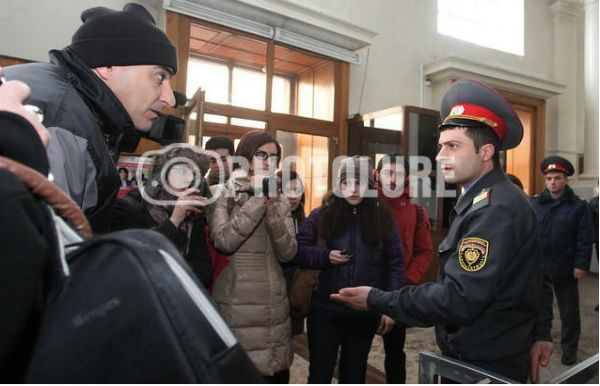 Armenian police have not substantiated why journalists’ professional activities were obstructed during Yerevan Mayor Taron Margaryan’s defense of his doctoral thesis on Dec. 26, 2013.

Journalists who intended to cover the mayor’s presumably public defense of his dissertation were not permitted to enter the Armenian State University of Economics.

A group of youth who did not identify themselves greeted journalists outside the university and prevented their entry into the building.

According to an official statement [AM], police “never been constrained in the matter of holding responsible this or that person within the powers granted by law who committed an illegal act and implemented only a fair investigation.”

Committee to Protect Freedom of Expression (CPFE) President Ashot Meliqyan believes the police has not fulfilled its function.

“With the statement it disseminated, the police once again emphasized that it serves not the law, but the ruling authorities. The video that’s uploaded online and the testimonies that journalists give are nothing if not fact that journalists’ activities were obstructed, and it should be viewed as such. What also took place here was hooliganism on the part of students — they cursed at and shoved journalists. These two articles [of the RA Criminal Code] need to be applied by the police,” he says.

In the CPFE president’s opinion, the students were carrying out orders. “It can be assumed that it was the rector’s order, not to allow journalists to enter the economics university; that’s obvious, and journalists themselves also noted this. There is no other reason why journalists were unable to cover Taron Margaryan’s doctoral thesis defense: the only reason is the work of journalists was obstructed in an organized way,” he says.

Attorney Ara Ghazaryan likewise finds that journalists’ activities were obstructed. “This is an inadequate response by the police. There are physical individuals who made a statement about a crime, and there are images and videos recorded on devices from which it’s clear that there was the fact of obstruction; that is, in my opinion, a crime occurred,” he says.

According to the attorney, there are also elements of hooliganism in what happened. “According to precedence in the Court of Appeals, if an act is directed at violating public order, then it’s hooliganism — it doesn’t matter whether the act occurred in a closed environment or in a public space. The youth issued curses; they gravely breached and ignored the public order,” he says.

The police statement also states that there were civil relations between journalists and the youth spewing insults at the journalists.

Ara Ghazaryan doesn’t agree with this view by the police. “Violence is not in the civil arena, but in the criminal. According to the right of precedence, the understanding of obstruction falls under this understanding. Public interest states that such interference in a journalist’s work must be resolved in the criminal field, not the civil [field],” he says.