How the Media Covered the 1988 Spitak Earthquake: Multimedia Exhibit Launches in Gyumri 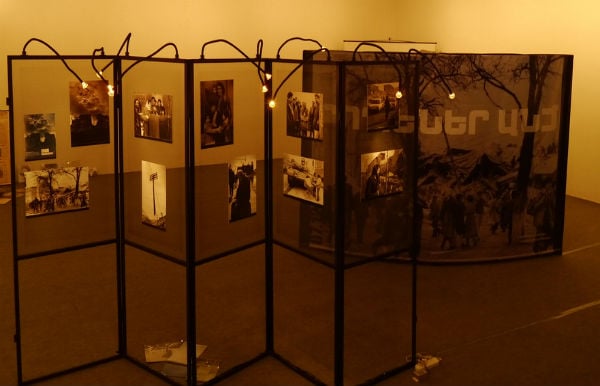 Lratun interactive media museum’s first multimedia exhibit — “An Earthquake that Shook the Media” — opened at Gyumri’s Still Museum of Fine Arts. The exhibit depicts how the press, television, and documentarians of the time covered the 1988 Spitak earthquake.

According to him, though only 25 years have passed from the tragic event, much news content has not been retained.

“This exhibit is the result of a certain amount of journalistic investigation: showcased are interviews with photographers, journalists, and filmmakers; television reports; unpublished archival works, excerpts from the media. Taking the earthquake as an example, we can understand what the news media of the day could do,” says Martirosyan.

According to Armen Muradkhanyan, who photographed the 1988 earthquake and provided photos to Lratun, he’s never seen such a spectacular exhibit.

“It’s a very interesting exhibit. It’s something new: for the first time, I’m seeing fewer pictures on the walls than on modern devices. It’s important that this not be forgotten; for it always to be shown and travel to different cities,” he says.

According to Gyumri’s Deputy Mayor Ruben Sanoyan, who attended the exhibit launch, it’s difficult for Gyumri residents, even 25 years later, to remember what happened, but the exhibit is of great significance, especially in terms of preserving history.

“The media sector, the journalists covering the earthquake made their contribution in presenting and bringing the entire story of the earthquake to today’s generation. And it’s interesting that this story today is presented through innovative technologies,” he says.

Still Museum of Fine Arts Director Artush Mkrtchyan finds that the “An Earthquake that Shook the Media” exhibit, due to its interactive element, allows visitors to picture themselves on the scene.

“The exhibit left quite an impression: both the technology used and the overall concept are very interesting and contemporary. Frankly, our museum is already 22 years old, but we’ve never had such an exhibit,” he says.

Museum visitors were also impressed by the exhibit — some were so moved that they couldn’t hold back their tears.

“It’s quite impressive. It’s a very important display; excellent work has been done. Twenty-five years have passed since the earthquake, but you relive the past, you shudder,” says 50-year-old Gyumri resident Edward Torikyan.

“I am extremely impressed. I experienced it all again. For someone who lived through the earthquake, seeing all this through the eyes of a bystander, a journalist was terribly shocking,” says 35-year-old Gyumri resident Sofia Martirosyan.

Museum visitors also familiarized themselves with the media literacy game Mediamart (“Media Battle”); they checked and increased their knowledge about the media, and reported the news with the assistance of simulated tools.

The Lratun media museum exhibit will be on display at Gyumri’s Still Museum of Fine Arts until Oct. 2.

Lratun is a project of the Media Initiatives Center (formerly, Internews Media Support NGO, the organization also responsible for this site), developed within the framework of the Alternative Resources in Media program and with the support of the United States Agency for International Development (USAID).