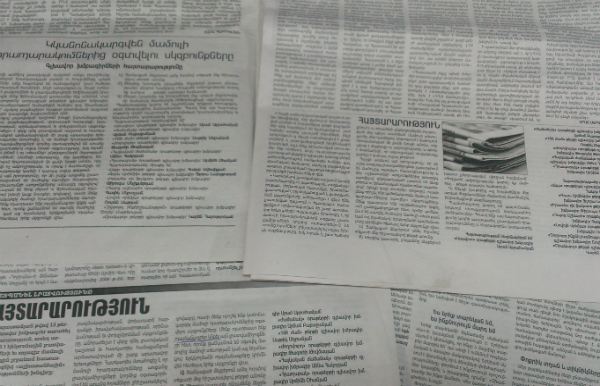 Several local newspapers have issued a statement [AM] calling for other news outlets to note their newspaper’s name and include a hyperlink to the newspaper’s website when citing content from their publications. They also ask other news outlets citing them to include the following sentence in the republished article: “You can read this article in full in today’s issue of [insert newspaper name here].”

The open letter was signed by the editors of Aravot, Zhamanak, 168 Zham, Joghovurd, Haykakan Zhamanak, and Hraparak, who are joined by the Hayots Ashkharh, Irates de Fakto, and Azg newspapers.

“Considering that a number of online news outlets are abusing the opportunity of availing of the press, dishonorably enjoying the fruits of our labor, acquiring an audience and ensuring financial profit (through site visits and advertising), we have decided to regulate the practice of using reports published by the press,” reads the statement, in part.

“A simply uncontrollable situation has been created when others make use of our work. We exert effort, incur expenses, maintain staff, and pay taxes, but it turns out the fruits of our labor are enjoyed also by those who have done no work on the creation of that product,” says Hraparak editor Armine Ohanyan.

According to her, if (primarily, online) news outlets continue to disregard the conditions for republishing they’ve outlined, the newspapers will take the matter to court.

News.am and Armenpress news agencies already have a media policy in place whereby those who wish to cite their content in full or in part must first obtain written permission.

Mediamax news agency, apart from setting rules of use for its content, in order to fight against unscrupulous users of its content, has sought the services of a legal office, which will protect the news agency’s copyright on its content, uncover incidents of unlawful use, and warn violators of the legal consequences of their actions.