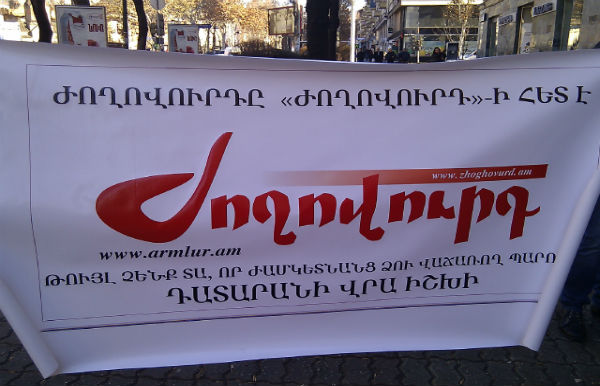 Journalists, and public and political figures on Thursday gathered outside 22 Abovyan St., the editorial offices of local daily Joghovurd, which is being sued by Yerevan Poultry Farm open joint-stock company.

In a display of support to their colleagues, local journalists marched to the Court of General Jurisdiction of Kentron and Nork-Marash Administrative Districts of Yerevan, where the civil lawsuit launched by Yerevan Poultry Farm founder Khachik Khachatryan on Jan. 10, 2013, against Joghovurd and journalist Sona Grigoryan was being heard.

Khachatryan finds that the Dec. 11, 2012 Joghovurd article “Well-known Oligarch Fined for Eggs Past their Expiry Date” harmed his honor, dignity, and business reputation. The article claims that Yerevan Poultry Farm sold eggs that were past their expiry date.

Khachatryan is asking the newspaper to publish a retraction and compensate him 3 million AMD (approx. $7,378 USD) for insult and defamation. Furthermore, the company owner has asked the court to freeze the daily’s property and financial assets to the tune of 3 million AMD and to prohibit the newspaper and Sona Grigoryan from publishing in Joghovurd or other news outlets either the issue being discussed in court or the judicial process of the case till the matter is resolved in court.

This motion was partially sustained: the court ruled to freeze the newspaper’s property.

Participants of Thursday’s march delivered to the court Joghovurd’s motion to remove the freeze on its property. According to newspaper editor Taguhi Tovmasyan, the court ban interferes with their normal functioning.

“If it’s frozen, the free disposition of that property is prohibited and that already signifies a hinderance. That is, I cannot freely command my computers, but the worst thing that can happen is that at any moment the Compulsory Enforcement Service of Judicial Acts can come in, take our property, place it any safe area so that it won’t be damaged, and afterwards they can sell that property and pay the cost of Khachik Khachatryan’s dignity,” she says.

In lawyer Gevorg Hayrapetyan’s opinion, the Compulsory Enforcement Service of Judicial Acts confiscating Joghovurd’s property at this stage of the judicial process is not really likely. According to him, placing a freeze on property implies inventory, restriction on disposition, and only in certain cases, confiscation.

“Restriction on disposition doesn’t mean prohibiting use but prohibiting selling, changing ownership, donating or placing it as [loan] collateral. Seizure [of the property] happens only if necessary, and there has to be grounds for this necessity,” says the lawyer.

Within three days’ time the court will convene a court session and issue a ruling on the newspaper’s motion of removing the freeze on its property.

There’s one more lawsuit between these parties. The newspaper and journalist Sona Grigoryan have launched a suit against Khachik Khachatryan, demanding an apology for insulting the journalist — Khachatryan had called the journalist “prostitute”.