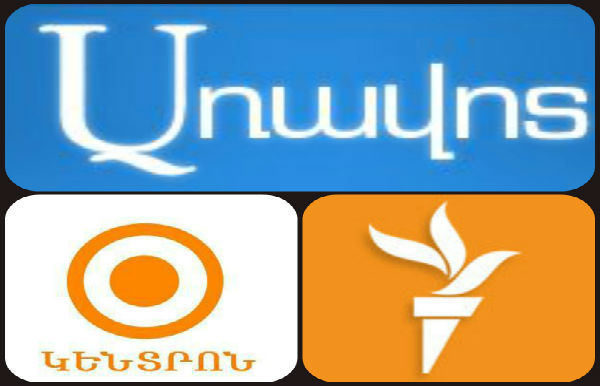 The Yerevan-based Committee to Protect Freedom of Expression recently published its annual report on violations of the rights of journalists and news media in Armenia (currently only available in Armenian; though 2012 quarterly reports can be downloaded from the Committee’s website).

According to the report, the majority of violations of journalists’ rights in 2012 occurred during the election period.

“In the strained atmosphere that emerges during important political events, particularly elections, instances of pressure on journalists and the media, and violations threatening freedom of expression increase, but compared to previous years during which elections were held, the situation in 2012 was better,” reads the report, in part.

Compared to 2011, in 2012, there was 1 less case of physical violence and 12 less incidents of pressure on news outlets and their staff.

However, violations regarding the right to receive and impart information increased by 16 incidents: from the 23 recorded instances, 9 occurred during the National Assembly and local self-government bodies’ elections.

The Committee to Protect Freedom of Expression finds that the decrease in the number of recorded instances of pressure on journalists and the media is related to the drop in libel and defamation lawsuits filed against news outlets.

As previously mentioned, there was a great increase last year in the number of violations regarding the right to receive and impart information.

“If in 2011, this figure was 7, in 2012, it was 23. Four of these incidents took place on May 6, the day of the parliamentary elections; four during the local self-government bodies’ election period in September; and one on Dec. 2, the supplementary day for parliamentary elections under the majoritarian system,” reads the report.