Reaching Readers is No. 1 Issue for Armenian Children’s Publications 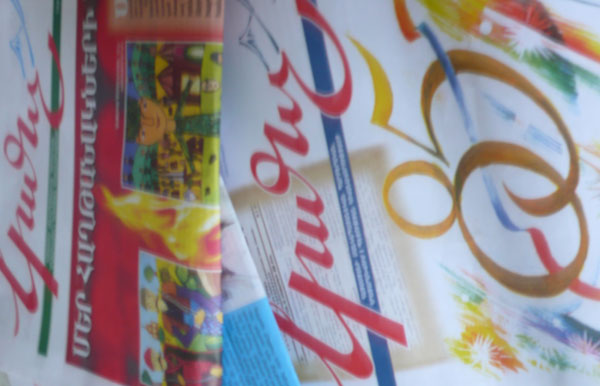 The Armenian monthly children’s magazines Aghbyur and Tsitsernak and the newspaper Kanch have been published since the Soviet period. In the past, they had serious influence on a Soviet child’s upbringing. These publications were in demand and anticipated in kiosks and schools. There were also subscriptions through which these publications were in nearly every family’s home. After Armenia gained independence, these publications found themselves in a rather difficult situation. It’s true, in 1991, a decision was passed to include these publications under state consideration and to finance their publishing, but times have changed and their former glory has been left behind.

Agbyur and Tsitsernak, published today at 2,000 copies per issue, cost 700–800 AMD and 450–500 AMD respectively to produce, but are sold for 200 AMD each — yet this still doesn’t help the magazines obtain a readership. Various information resources and the Internet have made children today unaccustomed to reading, visiting the library, or searching for their favorite newspaper or magazine in newsstands.

“The problem of sales is very complicated, though last year we were still able to get the last morsel to readers. We sell [the issues] ourselves, and we’ve never had any returns. Now it’s become harder because [Armenia’s] education minister from time to time makes statements that to prevent the risk of corruption in schools nothing should be sold,” says Aghbyur’s chief editor Tadevos Tonoyan.

The same concern is expressed by the editor of Kanch, who says that sales are carried out solely by their own efforts; they don’t even have a vehicle — they deliver the newspaper to the reader by foot, public transport, or, in the best case scenario, taxi. Sales are carried out in communities just outside the capital and schools in the capital that comprise their loyal readership.

Press for children and youth is financed by the state budget through the Ministry of Education and Science. “It’s a paradox. They fund a newspaper for children to be published, but when we try to sell [the paper] in the schools, immediately the school principal refers to the [education] minister’s dictate that collecting additional money from children is not permitted. The cost of the issue is 455 drams; we sell it for 100 drams — we’re practically giving it away,” complains Kanch’s chief editor Varuzhan Mnatsakanyan.

Kanch is also published at 2,000 copies per issue — instead of its previous 200,000 copies per issue. Also operating is the nearly half-century-old Shavigh, a young artists’ group, whose journalistic publications are published as inserts. Editors’ attempts to meet with the current education minister and address the problem have been futile. They say that former ministers were driven and placed importance on the role of such publications in the spiritual development and real education of children and youth. “One time the government sent us knocking on the doors of regional governors [marzpets]; they were saying go down on your knees, beg, do I-don’t-know-what. They suggested ludicrous things to cut our funding, for this sphere to completely disappear. Chair of the National Assembly Hovik Abrahamyan supported us; he simply said, ‘If it’s planned for in the budget, why are you removing it?’,” said Tsitsernak editor Anush Vardanyan.

The editors of children’s publications noted that despite everything, they continue to fulfill their mission — to get the press to the readership. Recently, Aghbyur’s editor had been to schools in Shirak province, taking issues of the magazine to schools in the rural communities of Basen and Jajur and donating issues to the schoolchildren so that they can become acquainted with and establish contact with them — after all, they might become the magazine’s future correspondents.

The editors unanimously affirm that once children become familiar with their publications, they become regular readers and contributors, and organize discussions and meetings with the authors of articles that interest them. The problem is that the teacher or the school has to introduce the publication to the children.

State subsidies allow these magazines and the newspaper to cover their publication expenses, maintain a small staff (7–9 people at most), pay rent, and fulfill tax obligations. Tonoyan considers better the policy not of financing magazine and newspaper publishers, but of helping them. This is particularly true for children’s and youth publications, as it’s not only right, but also necessary and unavoidable, since such publications in no country in the world can pursue business objectives. “We’re unable to save money and buy at least one computer. Our computer is from the 90s, as old as our one scanner and old car, which allows us to maintain contact with the regions,” says Tonoyan. The office space is property inherited from Soviet times.

Aghbyur’s editor’s concerns are echoed by the editor of Kanch. “There isn’t even the opportunity to leave for business trips, which is one of the most important functions of a newspaper. Once in a thousand, for something very important, we depart for Vanadzor or Gyumri,” says the editor of Kanch, annoyed.

In good condition when it comes to technical equipment is Tsitsernak — staff have been able to purchase new furniture, update their technical equipment, and they have a four-room rented office space. “We’re keeping within the budget; if given the opportunity, we might be able to increase the print run as it was years ago when we topped 8,000 [copies per issue], because our readers were impatiently waiting for our magazine. It only remains unclear why is the state funding [such publications] if it won’t allow them to reach their readers?” says Vardanyan.

Despite the existing problems, the editors try to uphold their publication’s good reputation, not to retreat and to ensure high-quality articles. After all, these publications were founded by and their literary biography was paved by famous Armenian writers and intellectuals — Yeghishe Charents, Hrant Matevosyan, Silva Kaputikyan, Vahagn Davtyan, and others.

Last year, Kanch marked its 85th anniversary. In the anniversary issue were successful and impressive articles by people from various sectors who contributed to the magazine at various times throughout its history, as well as orders on discipline and the corresponding decisions and statements by the Young Pioneer Organization of the Soviet Union.

Children’s publications in Armenia today have one issue — to reach their readership, and they hope that as in the past, so too today they’ll be able to get into schools through subscriptions.