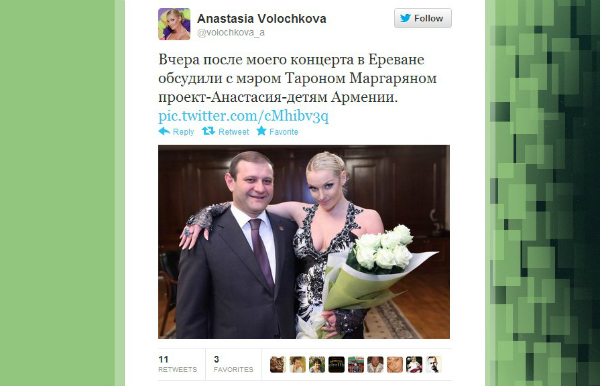 Russian prima ballerina Anastasia Volochkova’s Oct. 18 meeting with Yerevan mayor Taron Margaryan made the headlines particularly in the Russian tabloids. After photos of Volochkova and Margaryan were published on Yerevan City Hall’s official website, Runet was inundated with scandalous and obviously “yellow” articles, stories, and commentary.

If in the last 24 hours you searched “Yerevan City Hall” (in Russian) online, you would see the following results: 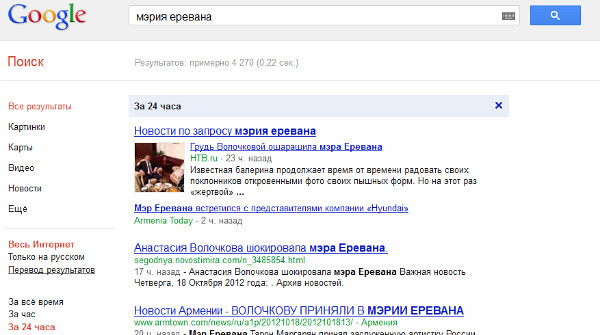 The vast majority of results refers to the meeting between Taron Margaryan and Anastasia Volochkova, with a particular focus on scandalous media persona Volochkova’s choice of attire and the spread the mayor had laid out for the occasion. Volochkova’s violation of the dress code appropriate to official meetings and Taron Margaryan’s obviously excited and jubilant face become top news items.

Russian-language websites enthusiastically covered this meeting, with mainly the same portrayal. Different were only those turns of phrases that attempted to present that her breasts were showing and the mayor’s reaction. Below are headlines from various Russian websites (mainly from the yellow press):

Articles with similar headlines appeared not only in the tabloids, but also on more reputable platforms. In an article titled “Volochkova’s breast flabbergasted Yerevan’s mayor,” the Russian HTB TV station on its website wrote: “The famous ballet dancer from time to time continues to delight her fans with photos of her splendid breasts. Becoming Volochkova’s ‘victim’ this time was a respectable and estimable man — the mayor of Armenia’s capital city.”

The photos of the mayor and ballerina quickly made their way also on social networking sites, particularly after Volochkova tweeted that she met with Taron Margaryan and discussed the details of a charity concert devoted to Armenia’s children. She also tweeted a photo, after which tweeps advised her to “beware of hot-blooded Armenian guys.” Volochkova, who occasionally poses for nude photos, promoted herself as she does usually, while the Yerevan mayor, willingly or not, contributed to it.

The municipality’s website, in publishing the photos documenting the meeting with Volochkova, for a few days became a source of “hot” news among read (or rather, viewed) news sites.

It’s hard to say, did the Yerevan mayor’s PR experts calculate such a reaction from the Russian tabloids? Did Taron Margaryan need to be associated with such a scandalous media figure?

The scandalous Russian ballerina’s participation in the Erebuni-Yerevan celebrations became a good opportunity for PR for the glamorous dancer and the Yerevan mayor.

In any case, in the last few days, Yerevan City Hall was identified first of all with a partially nude breast, while Taron Margaryan was presented as a conservative, modest, and naive Armenian man, who was stunned and raptured by the Russian beauty’s deep cleavage.