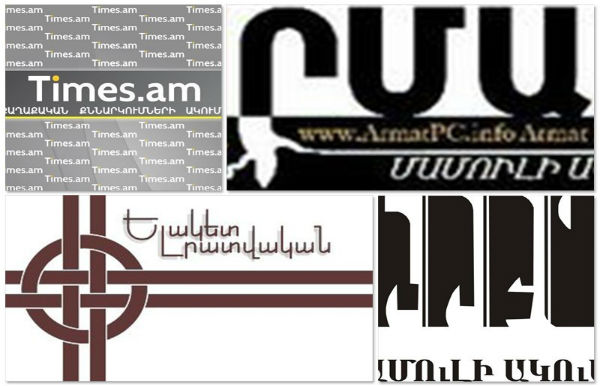 Press clubs in countries having a developed media gather journalists and professionals who have certain ideas and principles and who obtain membership to that club, pay a membership fee, and become the bearer and interpreter of those ideas.

Press clubs show also the directions for media’s future development. But what functions do the approximately two dozen press clubs in Armenia have and how much do they contribute to the development of our field? And, in general, what problems do they solve?

Founders of press clubs in Armenia state that the reason for establishing press clubs was news outlets’ insufficient coverage of topics of particular importance — sometimes not covering them at all. The press clubs contributed to making the media field more active and diverse. Of course, there are also those that more so aim to pursue profits.

In Armat Press Club director Vahram Mirakyan’s opinion, press conferences, with their passing and superficial comments and questions, it seems, had exhausted themselves, and there was a need for a more serious, professional approach.

This became the reason for press clubs pursuing certain ideas and principles to gather their circle of professionals and speakers. Sometimes that circle is very narrow.

“For example, one politician goes to one press club because she knows the moderator and knows that press club’s environment, and it’s very difficult to get her to go to another press club. And it’s according to this circle that journalists form,” says Mirakyan.

Times.am Press Club director Davit Melik-Shahnazaryan is likewise convinced that press clubs today have exhausted themselves, and more in-depth analysis are necessary for both the media and the public, which will provide an accurate picture of the events taking place around us.

“The main newsfeed that existed on news websites, as well as on our site, wasn’t satisfactory. It was constructed more so on rumors or on receiving small political dividends. We tried to make the discussions a little bit more expert- and content-based,” he says.

Finally, the press club has to be considered as an information resource that allows experts and speakers to present their ideas and thoughts deeper, making them a topic for discussion for not only the press, but also society. It’s noticeable that when a heated debate or a clash of opinions on the day’s important topic happens in press clubs, in which journalists also participate, the response to press clubs’ gathering discussions are great.

Some hold the view that press clubs are killing real journalism, as the journalist merely becomes a recorder of the speaker’s thoughts. Press club directors, however, don’t agree with this view, since in their opinion, this is more due to the journalist’s not being properly prepared, as he writes his story only on the basis of the speaker’s expressed thoughts and opinions and doesn’t search for other sources of information.

“Nearly all news outlets make use of press clubs. It saves the journalist’s time, especially since there’s this concept of ‘traffic,’ which forces [the journalist] to prepare the piece as quickly as possible, since it’s speed that ensures advertising, money, and so on. And the journalist works no longer on her professionalism, but on amount — quickly and [by supplying] many pieces. What occurs as a result is press club journalism. And I don’t see that we’re to blame in this,” says Mirakyan.

Of course, press clubs also work according to advertising market laws. Many press clubs picture their activity in this way: as many press conferences and speakers as possible, to ensure the advertising demand, since their profit depends on this.

If a press club doesn’t pursue commercial aims and isn’t forced to organize press conferences every day or several times a week, it has the opportunity of working more independently, since it doesn’t have an obligation toward its sponsors.

“Journalists’ level of professional readiness is not always sufficient. Perhaps the education that is provided in our universities is insufficient, or that education doesn’t satisfy our market demands. Increasing the level of journalists’ work lies in the interests of press clubs because journalists create the media atmosphere, and much depends on that,” says Mirakyan, adding that press clubs also offer professional training courses for journalists.

Though press clubs in Armenia have been around for more than a decade, press club founders are convinced that they’re perhaps quite far from attaining the high-quality standards of Western press clubs.

Some founded press clubs with the aim of organizing “without borders and restrictions” press conferences (as the Yelaket Press Club director, answering our questions, told us); some created it based on a certain ideology; and some (as, for example, Urbat Press Club) want to be a free platform “for politicians, intellectuals, artists and simply people who have an opinion on a topic having public resonance, and who, at the same time, strive for anti-national and unhuman topics not to be discussed in the press club.”

Yet, in Armenia, the concept of a “press club” is very narrow — and probably still in a preliminary state.