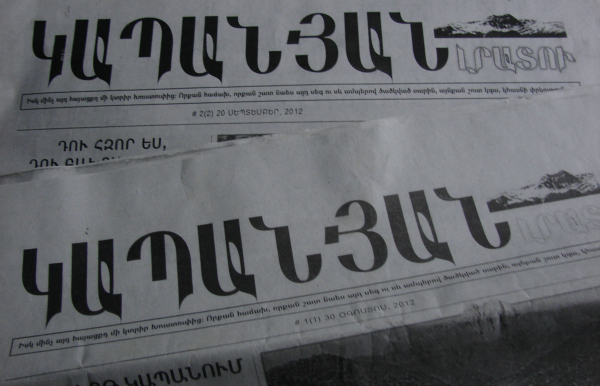 A month ago a new newspaper in Kapan was launched — Kapanyan Lratu (“The Kapan Reporter”). The founder and editor of the paper is Marat Harutyunyan. Kapanyan Lratu is published once every 10 days at 500 copies an issue. The layout and printing is done in Yerevan as there’s no printing press in the southern Armenian province of Syunik where Kapan is located.

Most of the articles in the paper are written by the editor himself, who says that he’ll get help soon — in the form of one freelance reporter.

“I’ve always felt that local news outlets make serious omissions. Kapanyan Lratu will be a genuine conversation with the public. The paper’s main goal is to nurture an active and informed civil society of youth in Kapan,” says Harutyunyan.

Apart from news and interviews, Kapanyan Lratu includes a section titled “Kapan residents create,” where excerpts from residents’ works are printed. The newspaper will also cover the matches of Kapan’s football club Gandzasar. There’s an agreement between the paper and Gandzasar’s fan club for exclusive news stories.

The new publication is currently financed by individual benefactors and sponsors. “The paper has just been launched; I think soon we’ll be able to cover printing expenses with advertisements,” says Harutyunyan.

Few in Kapan, however, know about Kapanyan Lratu. The newsstand adjacent to Kapan’s cultural center received 10 copies of the first issue, of which 8 were sold. The second issue has just come out on newsstands.

Various rumors have been circulating concerning the (political) orientation of the new paper in Kapan, since the first issue was published during the local election period and was defending Kapan’s newly elected mayor, Republican Party of Armenia member Ashot Hayrapetyan. Editor Marat Harutyunyan, however, denies any connection between his paper and the mayor.