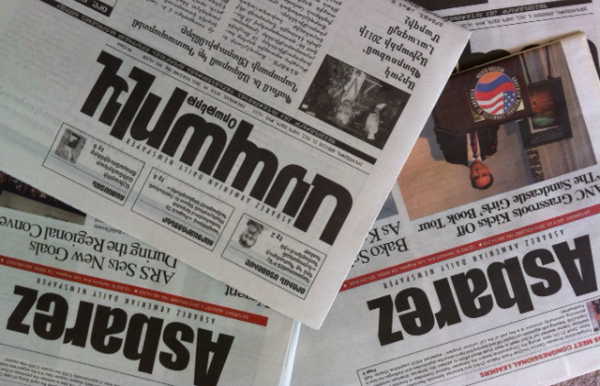 The first issue of the weekly Asbarez newspaper was published on Aug. 14, 1908, in Fresno, California. The editorial titled “Why this paper?” defined the paper’s audience — “the Armenian family, persecuted and cast out of its native land, that comprises the Armenian community of Fresno and its surroundings. [The fact is] Armenians have come here with the intention of staying.”

Today too Asbarez has the same mission, to become the newspaper of Armenians gathered from all corners of the world. Asbarez is already 104 years old, containing in its pages the concerns of Armenians who’ve come with “the intention of staying.” More and more Armenians settling in Glendale and North Hollywood prompted Asbarez in 1970 to move from Fresno to Los Angeles. “The newspaper, first and foremost, has to be a bridge between Armenians in Armenia and those living abroad, to participate and foster public life, give ideological and national direction, and turn readers into a part of society,” says editor of Asbarez’ Armenian version Apo Boghikian, adding that in 1918 and during WWII, many readers, influenced by the paper, left for the homeland.

After moving to Los Angeles, the paper began publishing its English version on May 1, 1970. The aim was not only to meet the demands of English-speaking Armenian readers, but also to make the Armenian press more accessible to non-Armenians. The press is one of the best means of creating a link with US officials elected by an Armenian electorate. To demand, to complain, to pressure, to encourage — the opportunities of the media are great. The US press (for example, the Los Angeles Times or Politico) often cite Asbarez, stressing the importance of the Armenian diaspora’s voice — especially when it’s tied to the process of recognizing the Armenian Genocide or Karabakh.

Of course, the English-language community paper also has to have a diplomatic approach. “One of our best readers is Matthew Bryza,” says editor of the English version Ara Khachatourian, smiling and recalling former US ambassador to Azerbaijan and former US co-chair of the OSCE Minsk Group Matthew Bryza’s fervent response and complaint letter sent to the editors.

The importance of an Armenian press in the diaspora is also to be bold and outline a new approach. Asbarez’ take on events in Armenia often differs from those within the country. Perhaps this is as a result of the traditions and influence of the American press (an understanding of freedom of speech, the vision and style of delivery, the lack of control). During the Soviet years, for example, Asbarez cherished the dream of having an independent Armenia and searched for all possible ways to making this happen. These days Asbarez is an arena for Armenian experts living in the Diaspora to engage in heated discussions and propose new ideas.

However, there is an obvious lack of criticism of problems inside the community. Boghikian explains: “Armenia is a state, and you can’t dismantle state structures with criticism. Community structures are much more fragile and need encouragement. They are implemented thanks to volunteer efforts, and a critical attitude might have a bad effect. Some might argue that criticism can be more constructive. But Asbarez doesn’t assume that role; it more so aims to provide support.”

The newspaper, in which Western Armenian at one time prevailed and which was more so directed at a certain target audience, now tries to gather together Armenians in the US who’ve come from all over. It doesn’t matter whether Southern California’s Armenian residents are from Lebanon, Syria, Iran, or Armenia — the newspaper tries to reach out to all. And the aim isn’t only not to lose readers. “Our community is an experimental field of coexistence, where the relationships and ideas of Armenians from different regions are evident. For example, Armenians who emigrated from Armenia weren’t greeted with a ‘welcome’. It’s just that the groups of Armenians from Armenia, Iranian-Armenians, and Lebanese-Armenians are large. And the issues are unclear and unresolved. There’s no establishment or association that carries out joint and effective work,” says Boghikian.

Asbarez incorporates Western and Eastern Armenian equally, the various phonetics, so that at least in this arena, that this is a Lebanese-Armenian, Iranian-Armenian, or Armenian from Armenia paper won’t be stressed.

If we consider that the written word maintains and develops language, then Western Armenian is endangered: We sufficiently have neither literature nor press. Asbarez needs a generation change of Western Armenian educated staff. This is an alarm call… Praising the potential of Armenian educational institutions abroad, we hope that Armenia’s state linguistic establishments will intervene in the task of developing Western Armenian. 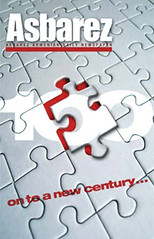 A press operating in a state system is one thing, while that created in a self-organized community is something completely different. If the press is not indifferent and lives with the hope and life of the community, then reserved for it is the leadership role. It can be said that all community organizations are unique ministries, and a newspaper, an organized platform among them.

“We’ve worked according to the times,” says Khachatourian, adding that adopting technological progress is not a luxury but a necessity. The print press yields its place to the Internet. The news is more accessible online, especially since it’s possible to update frequently. And now the print version itself is a luxury. But Asbarez will continue to print as long as there are still Armenians in the diaspora. It will be printed even if it doesn’t make any profit since the paper has never pursued a mercenary purpose. And the print version of the paper will be as constant as the flow of Armenians to the US.