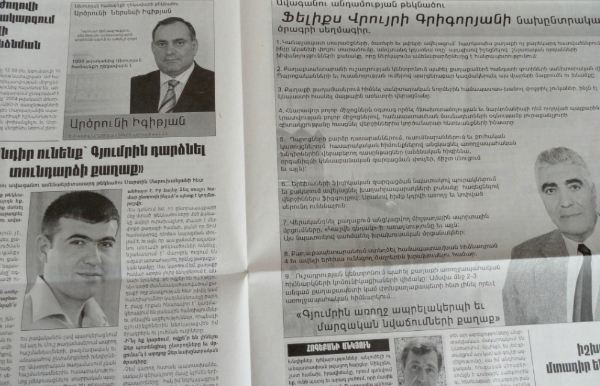 The campaign for the Sept. 9 local self-government elections wasn’t strange for Gyumri-based news outlets. This time too news outlets were unable to organize a debate among the four candidates for city mayor.

Heghine Kushkyan, producer of the political and public affairs program “Tesankyun” on Gyumri’s Shant TV, says that candidates aren’t “active,” and it’s very difficult to get them to agree to appear live on television.

“Our invitations were willingly accepted by the female candidates and those [candidates] put forth by the civic initiative. The highest rating was recorded during my live interview with Council of Elders candidate Chubar Zargaryan. In the days following, it was the topic of conversation in Gyumri, and with its rating, that day’s program equalled the program with guest Vardan Ghukasyan during the last elections,” she says.

That which was most shown on local airwaves was mayoral candidate, Prosperous Armenia member Samvel Balasanyan’s election videos and ads, followed by those of the second mayoral candidate, Armenian Revolutionary Federation member Hovsep Simonyan. The other two candidates didn’t run any TV ads.

During the campaign period, out of the Gyumri-based TV stations, Tsayg had set the lowest price for advertising; Shant TV, the highest.

Nona Tonoyan is one of Tsayg’s advertising agents. “Council of Elders’ candidates mainly opted for short videos, where their photo and their motto, which is either written or said by them, appears. There are cases where the candidate would like his biography to air as an ad. There is no one doing anything new, and we work to carry out the client’s wishes,” she says.

“The news outlets accommodate the client’s tastes, so as not to lose a potential payer. In this sense, we haven’t come very far from the time of Abisoghom Agha [a character in a popular folk tale; popularly known as a naive man who is easily deceived] — if there’s a wish to be filmed on farms and with donkeys, they’re ready [to do so], and they’ll never say that’s not the right approach,” says Martirosyan.

Social networks also have a role to play in these elections in Gyumri. The initiative “The City Belongs to Us,” which has put forth 7 Council of Elders’ candidates, actively uses Facebook. “I consider that these Council of Elders’ candidates introduced something new in terms of both the way the election campaign is organized and using the media in the best possible way. Those who come after them, in my opinion, will use this experience in the future,” believes Martirosyan.

Gyumri’s print media is also displeased with election campaign advertising. The daily newspaper Gyumri-Asparez, for example, received orders for only 2 ads during the campaign.

Mayoral and Council of Elders’ candidates mainly use the print press to publish their biographical details. Interviews with candidates are free of charge, but not everyone has something to say and is able to answer journalists’ questions.