A1+ News to be Broadcast on ArmNews TV 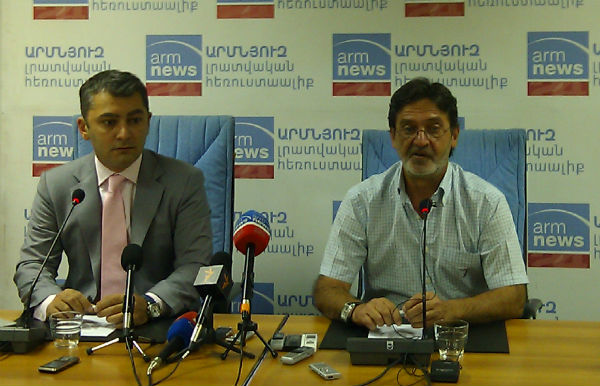 A1+ returns to television broadcasting. Beginning on Sept. 10, the A1+ news program Ayb-Fe+ will be broadcast five times a week (from Monday to Friday) on prime time (9 pm) on the ArmNews TV network.

“It was ArmNews’ initiative. The aim is to give viewers the option of receiving information through more competitive and diverse TV productions. We aim to offer programs especially during prime time, which will present news and the public life of our country as diversely and in as different spectrum as possible,” says ArmNews TV Director Artak Aleksanyan.

According to the one-year contract signed by the two news outlets, ArmNews will be commissioning five 20-minute news broadcasts weekly from A1+. A1+ Director Mesrop Movsesyan and Artak Aleksanyan both assert that ArmNews won’t interfere in the broadcasts’ editorial policies. News programs covering daily events will be broadcast with different, A1+ and ArmNews, approaches.

“Ayb-Fe+ will offer day-to-day affairs and events, and politics. We want to put the accent on culture, which I find is somewhat ignored in this country,” says Movsesyan.

“To a certain extent this is the result of the long-term struggle surrounding A1+ and European institutions influencing Armenia. On the other hand, however, I think, by offering airtime on another TV station, A1+ makes a bit of a compromise. And it’s even somewhat odd that a news outlet fighting for its rights for years agreed to concessions,” he says.

The media expert finds that, deep down, giving A1+ this airtime is tied to the 2013 presidential elections.

“Whether A1+ truly will be given freedom or not will become clear ahead of the presidential elections. If at that time too the A1+ announcer continues to comment on incidents the same impartial way then it will be clear that it was compromising. But if they try to put pressure also during that time then it will become clear that this was just a superficial concession ahead of the presidential elections — a PR move and a way to blow dust into the eyes of international institutions and the public,” says Arshamyan.

In media expert Suren Deheryan’s opinion, giving A1+ broadcasting opportunity will break the trend that the TV company has been deprived of broadcasting since 2002.

“I think, this will have a positive impact on perceptions in the international arena in terms of media freedom in Armenia,” he says.

“Knowing the A1+ director, I’m convinced he accepted this purely as a business proposal. I hope that on the threshold of the presidential elections we will have alternative information on television concerning the election campaign,” says Deheryan.

Recall, in 2010, during the no. 11 broadcasting license competition announced by the National Commission on TV and Radio, in which A1+ and ArmNews were competing, ArmNews was declared the winner.

And though A1+ till today is appealing the NCTR decision in court, according to Movsesyan, the collaboration with ArmNews has nothing to do with the trial.

“I wouldn’t want the concepts ‘work’ and ‘rights protection’ to be confused. We have our rights, but at the same time we can fulfill ArmNews’ requests, which we do with pleasure because I consider that a normal situation of a normal country,” says Movsesyan.

A1+ has been off the air since April 2002. In the past 10 years, A1+ participated 13 times in TV (and once radio) broadcasting license competitions. In all cases, the NCTR denied A1+ applications.