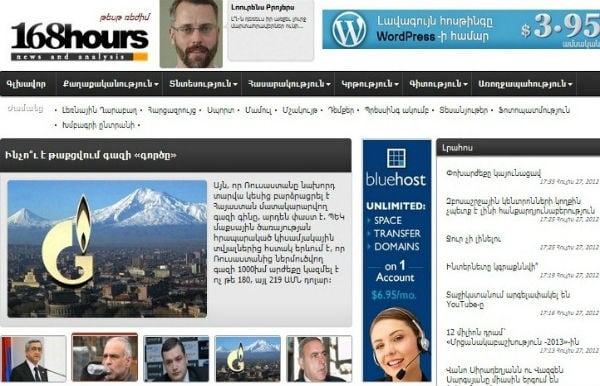 Beginning in September, local newspaper 168 Zham (“168 hours”) will be available in a new format. The print paper published three times a week will become a daily paper and its online version (168.am) will be updated daily with new content, new staff, and multimedia offerings.

“The media industry today can’t ignore the wide range of possibilities that the Internet provides. We too will try to make use of these and meet our readers’ demands,” says 168 Zham editor Satik Seyranyan.

According to her, the articles published in the print paper won’t be duplicated on the website; rather, authored pieces and videos will dominate the online version. However, unlike other sites, 168.am will be putting the emphasis not on quantity and speed, but on quality.

“Our issue is to offer readers good-quality material,” says Seyranyan.

Apart from changes in its appearance, the website will also additions to the main content — new sections and more in-depth coverage of certain sectors.

168 Zham’s customary social stories will be published not only as text but also as video.

“In addition, we’ll have two programs, including video footage of discussions of the political and analytical Pressing Club belonging to 168 Zham LLC,” she says.

Media expert Samvel Martirosyan finds that such media shifts are inevitable and necessary.

“Over the past year, the Armenian press experienced a serious shift, which led to the creation of new news outlets that don’t have clear direction and contain not elements of only print media, but also online platforms and television,” he says.

According to Martirosyan, those news outlets that don’t transition on time forfeit their position in the media sector.

“On the other hand, online tools allow one to become an active factor in the information field very quickly and even from a zero position,” he says.