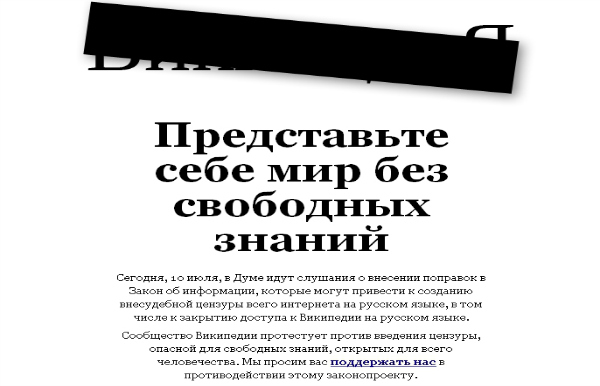 A new law in Russia may limit access to illegal information posted on the Internet. The new rules of the game for Russia’s internet domain, RuNet, are set by amendments to the Federal Law “On the Protection of Children from Information Detrimental to their Health and Development” (in the scope of this legislative initiative, there have been amendments and additions to three more laws).

Bill No. 89417-6 was included in the agenda of the State Duma (the lower house of the Russian Parliament) on Jun. 7; in one month, it passed in all readings; and on Jul. 18, it was approved as law in the Federation Council (the upper house of parliament).

Beginning from Nov. 1, it will be possible to block Internet content allegedly harmful to children without a court order or due judicial process. According to the law, a registry, unofficially called a “blacklist,” will be established in which disseminating banned content in the territory of Russia will be prohibited.

Those backing the law point out that it will allow them to control the spread of child pornography, the advertising of (illegal) drugs, or the encouragement of suicide or extremist action. Websites that contain such information, included in the blacklist, will be blocked in Russia — without a court order. If the owner of a website fails to remove banned content within 24 hours after its inclusion in the registry, the hosting provider will be obliged to block the entire website.

Human rights organizations and major Internet players have expressed (and continue to express) their discontent on adoption of the law. Participating in protest demonstrations were representatives from the Russian-language Wikipedia, the Russian social networking site VKontakte, the blogging platform LiveJournal, and Russian search engine Yandex.

The biggest complaint has to do with the criteria for establishing the blacklist, which resulted in various reactions. Wikipedia, for example, was unavailable for one day, declaring that it finds itself in a ridiculous situation, since sections on drugs or pedophilia on the virtual encyclopedia site might lead to the entire site being shut down. For example, information about potassium permanganate might be considered dangerous since an explosive device could be prepared with this chemical compound.

The law stipulates that internet content will be restricted also from the point of view of language: the use of non-normative lexicon might also become cause for blocking a website. The issue is that the criteria for what’s considered dangerous or harmless and legal or “illegal” is vague. Any website or online resource could find itself on the blacklist.

The OSCE Representative on Freedom of the Media, Dunja Mijatović, recently stated that creating a blacklist of allegedly harmful websites seriously threatens freedom of speech, since in the absence of transparent procedures, attempts to ban vaguely defined Internet content will lead to censorship.

Legislation in Armenia doesn’t have special legal acts aimed at regulating the Internet. The Laws “On Mass Media” and “On Freedom of Information” equally refer also to online news media.

In the opinion of National Assembly of Armenia MP, lawyer Arpine Hovhannisyan, the latest legislative amendments on Internet regulation in Russia are positive, though there are reservations.

“The regulation that has been defined in Russia should be considered positive from the perspective that it refers to the most fragile and vulnerable areas, the health and development of children; however, on the other hand, the mechanisms of regulation shouldn’t be tough. Apart from the specific sectors, there’s a need for clear criteria, as to what information should be considered forbidden,” she says.

The Member of Parliament says that in Armenia too the areas in need of regulation will be decided over time; at the same time, “any regulation must be done so that, at the end of the day, it doesn’t lead to extremes.”