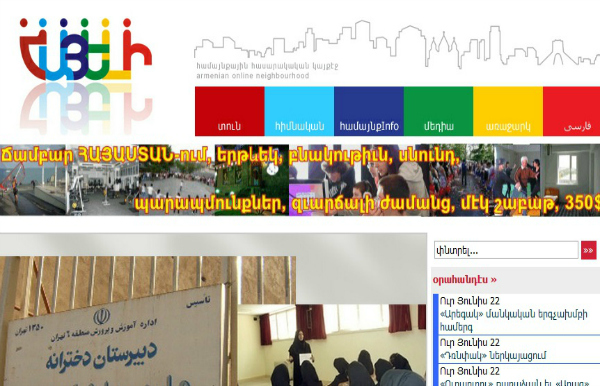 One of the Iranian-Armenian community’s newest online news outlets is hyeli.net. Launched a year ago, the site aims to deliver timely news about the life of the community.

“We were speaking about creating a site for a long time, since the life of the Diaspora community is kind of detached, or concentrated in a few centers and events, or the news about them is separate [within the different communities]. In short, many believed that so-called community journalism can be carried out immediately, without having to wait till evening for the only Armenian daily, Aliq, or having to visit one of the Armenian [community] centers to find out what’s happening,” says hyeli.net editor Sevan Petrossian.

The site operates out of Tehran and has three permanent correspondents. It addresses the life of the Iranian-Armenian community, events happening in other communities of the Armenian Diaspora, and events in Armenia, as much as they are palpable and current for Iranian-Armenian readers.

The team is small, but the events in the Armenian community are not that many. Hyeli.net delivers news about Armenia and the Diaspora mainly by republishing content from other sites.

“The bigger the team, the broader the scope of the news outlet’s activity can be, and naturally, there will be more original pieces and translations. Also, in one community, especially the Iranian-Armenian community, there can’t be that many events as there are in an entire country,” says the editor.

Sevan assures us that the site, operating in Iran, isn’t subjected to any restrictions in terms of freedom of speech.

“We practically don’t experience anything like that since we write for a limited number of Armenian people. Perhaps sometimes we’re forced to adapt photos to Iran’s religious standards,” she says.

The site’s main obstacle, according to Sevan Petrossian, is the issue of language.

“For me personally, one of the first and unforeseen issues requiring a solution was finding that ‘type’ of Armenian that would be legible and native to Iranian-Armenian youth who don’t interact with literary Armenian in their daily lives and that would be ‘modern’ and versatile for the community having a traditional attitude toward Armenian but wouldn’t deviate too much from the language of Armenian-language news outlets,” she says.

Just as with the community’s other online publications, hyeli.net also works through donations and personal efforts.