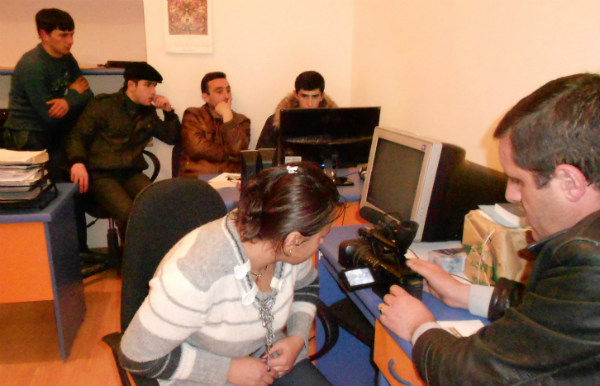 For two years, the Sharavigh Journalists’ Club has been operating out of the Goris Women’s Development Resource Center Foundation. Irina Yolyan, the coordinator of the club’s activities, says they try to describe the life of ordinary residents of the southern Armenian city of Goris and to produce videos about families living in poverty.

“One of our videos was about a family raising 9 kids in a destroyed house in Goris. There was response, and the family was assigned additional benefits — to the tune of $100. Another video was about a wheelchair user who needed medication. After the video [was produced] there were people who were regularly sending medication to him,” describes Irina.

Gathered at the club are mainly students from Goris State University — 12 journalists and 4 camera operators, some of whom never worked in journalism before. Sharavigh has its own blog at sharavigh.blogspot.com (only in Armenian), where members publish their pieces. In addition, Sosi TV in Kapan broadcasts local news and reports that were produced at the club.

[[wysiwyg_imageupload:258:]]Irina says it’s hard to establish a journalists’ club in Goris — the youth aren’t that interested in journalism, she explains. “For a long time, members were asked to become skilled and get to work. When we launched our blog we thought we wouldn’t be successful because we produced videos and believed that the best option was to broadcast them [on television]. But in a short time we understood that a blog is a new opportunity to write about all that interests and concerns us,” she says.

Anush Arakelyan has been a member of the journalists’ club for 5 years. She’s from the village of Kornidzor in the Goris region; she’s a third-year student at the Goris State University and a future philologist. She confesses that prior to joining the club, she never had a connection to journalism, though she always liked the profession. Anush has already managed to produce a few broadcasts and videos.  “At first, I didn’t believe that I could. I wasn’t sure of my abilities. But when they helped me and I produced a few broadcasts, I began to like this profession more — I become proud when I see the fruit of my labor,” she says.

During this election season, Sharavigh is also keeping abreast of political developments. The club publishes politicians’ election campaign speeches on its blog.

Sharavigh Journalists’ Club is united in its work and intends to implement new projects. Members say their only difficulty is that their team of 16 people has only one video camera to work with.