Newspapers in Armenian Province of Syunik Open to All Election Candidates 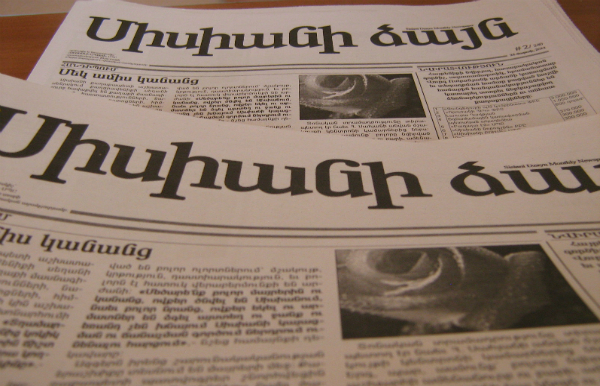 The newspaper Sisiani Dzayn and Vorotan published in the city of Sisian in the Armenian province of Syunik are published monthly. The papers’ editors are prepared to increase the number of issues during the election campaign period and even publish special issues.

According to Vorotan editor Arevhat Amiryan, there have ben candidates who have expressed preliminary interest in publishing paid content in the paper.

“We’re an independent paper, and people in Sisian know this. The pages of our paper are open to both opposition and government representatives,” she says.

[[wysiwyg_imageupload:238:]]Sisiani Dzayn, which is overseen by Sisian City Hall, is also open to all candidates. Newspaper publisher Armen Hovakimyan says the paper accepts paid content in Syunik province from all candidates of the upcoming parliamentary election.

“There will be unbiased coverage and equal conditions for all candidates who contact us, regardless of their party affiliation,” says Sisiani Dzayn editor Srbuhi Grigoryan. The paper currently publishes 500 copies of each issue.

Goris’ Kamq+ newspaper won’t be covering the pre-election period and won’t be publishing paid content. In special color issues, Kamq+ will describe the activities of NGOs in Syunik and the election platforms of candidates registered in the province’s no. 37 and no. 38 electoral districts.

“The first issue has already been published. We reported on residents’ and councils’ opinions and positions on the main social and economic issues in Syunik province,” says editor Anna Danielyan.

Goris’ Zangezur newspaper has been published since 1934 and is printed twice a month at 1,000 copies per issue. Newspaper staff are prepared to published paid content during the election season but have one reservation: candidates should not insult one another.

“There will be equal conditions and an equal amount of space in the paper will be provided to all candidates. There won’t be discrimination — everything will be open and transparent. In the corresponding pages of the paper, there will be [the candidates’] biographies, photos, election platforms and so on, so that the population is informed of who our candidates are,” says the paper’s editor, Greta Grigoryan.